An 'intercessor with Muslims' 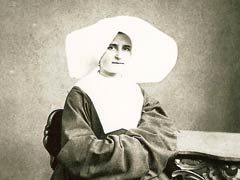 Almost 10 years after the attack on the World Trade Center, one thing is clear: In New York City and elsewhere, fear continues to guide many people’s views of Muslims. Is there an alternative pathway to living in peace with Muslims?

Two Catholic women, Erin von Uffel and Lorraine Fusaro, longtime friends and residents of Long Island, N.Y., believe they have identified a way to model peaceful coexistence and respect between Christians and Muslims.

Von Uffel and Fusaro, mothers of five and six children respectively, have spent countless hours making people aware of a French Daughter of Charity, Sr. Marie de Mandat-Grancey (1837-1915), foundress of the House of Mary -- in Turkish, Meryem Ana Evi -- located in Ephesus, Turkey, and the pivotal role she plays even today in creating a place of peace and prayer for millions of Christians and Muslims.

The women’s husbands work on Wall Street as traders. The von Uffels were based in London at the time of the 2001 attack, while Anthony Fusaro, who had worked in the World Trade Center, had changed companies to one located nearby five months before the attacks. He watched the horror up close. The Fusaros attended many funerals of friends and colleagues.

A few months after 9/11, the women met for lunch, and von Uffel mentioned that while in London she met Baroness Rosario de Mandat-Grancey. Her relative, Sr. Marie de Mandat-Grancey, had founded a shrine where Christians and Muslims pray side by side, von Uffel told Fusaro.

Later that evening, Fusaro wrote down her thoughts. She noticed the date, Jan. 19, 2002, which she had written as “1/19.” It struck her that Sister Marie was pointing to an opposite way forward from 9/11.

“We don’t know what we’re doing, as we’re just two mothers of large families,” said Fusaro. Since she became engaged in this work, Fusaro has done things foreign to her, like public speaking and managing a Web site.

“Anytime a thought came across my mind to give this effort a rest, to take a break from it, I received a phone call or a letter with a testimony of how Sister Marie healed someone of cancer or received some other benefit,” said von Uffel. “How could I stand before God one day and say, ‘I couldn’t be bothered when things got tough’?”

Marie de Mandat-Grancey, entered the Daughters of Charity in 1858. As a young sister, she worked in a pharmacy, a dispensary and an orphanage. In 1896, she volunteered to serve in the French naval hospital in Smyrna (now Izmir), Turkey, a dilapidated and underequipped facility. She became community superior there.

One evening during dinner, a Vincentian priest offered a spiritual reading about the visions of Anne Catherine Emmerich, a 38-year-old Augustinian nun who described a holy house of the Blessed Virgin Mary in Ephesus, Turkey. Tradition has it that Mary and St. John fled persecution in Jerusalem to Ephesus, which was a financial center and a place of religious freedom.

Inspired by Emmerich’s vision, Sister Marie and others began a long and arduous journey to locate the site of this sacred home. Archaeologists, with the help of villagers, located the ruins of a foundation rooted in a first-century Jewish community.

In 1892, Sister Marie used 76,000 francs of her own money to buy the property, and the archbishop of Smyrna declared the ruins the remains of a house inhabited by the Blessed Mother. Sister Marie took charge of promoting and caring for what today is known as Meryem Ana Evi, a shrine for not only Christians, but for Muslims, who venerate Mary as the mother of Jesus, whom they consider a prophet and close to God.

“This effort is important because our Holy Father is fostering peace between religions and our most important partner right now is Muslims,” said Bernardini, now retired and living in Rome.

In Ephesus, he said, Christians and Muslims pray together “without confusion and in peace.”

Von Uffel wrote a prayer to Sister Marie in 2004, and Bernardini granted his imprimatur. Five thousand cards were printed and distributed through a friend’s religious goods store. At that time, Passionist Fr. Jerome Vereb returned to Long Island from his work at the Vatican and visited the store. Vereb knew of Sister Marie because some in Rome believe she will be a saint one day and serve as “our intercessor with Muslims.” He volunteered to help von Uffel.

Von Uffel knew she was in uncharted territory. The natural constituencies to seek canonization, the Daughters of Charity and the de Mandat-Grancey family, were not pursuing the cause.

Franc took the matter to the order’s next general council. In the meantime, von Uffel printed a booklet about the life of Sister Marie and gave talks in the United States and abroad.

In June 2005, the Daughters of Charity approved the initiative.

“Erin and Lorraine are true heroines in this effort,” said Daughter of Charity Margaret John Kelly, executive director of the Vincentian Center for Church and Society at St. John’s University, Queens, N.Y.

“What we find attractive is both what Sister Marie accomplished in her life and how she enabled other religions -- the Orthodox, Muslims and Christians -- to come together to pray in peace,” said Kelly.

Von Uffel cobbled together the resources to make a short film on Sister Marie’s life and created the Sr. Marie de Mandat-Grancey Foundation.

In October 2005, von Uffel met with the new archbishop of Izmir, Ruggero Franceschini, and discussed the beatification of Sister Marie.

During his November 2006 trip to Turkey, Pope Benedict XVI celebrated Mass at Mary’s House in Ephesus and von Uffel was there. She met the Quatman family, whose grandfather started the Lima, Ohio-based American Society of Ephesus.

In 2007, attorney Bill Quatman, who lives in Kansas City, Mo., brought his bishop, Robert Finn, to Ephesus, where they met Franceschini. Izmir’s archbishop had agreed to write the Vatican’s Congregation of the Causes of Saints about Sister Marie, but he needed another diocese to take the lead, as his is a mission territory and without sufficient resources.

In February 2010, Bernardini and von Uffel approached Finn, and on Feb. 23, the Feast of St. Polycarp, a bishop of Ephesus, Finn agreed take up Sister Marie’s cause.

The official opening of the cause is scheduled for Jan. 21 in the Cathedral of the Immaculate Conception in Kansas City.

World | An 'intercessor with Muslims'