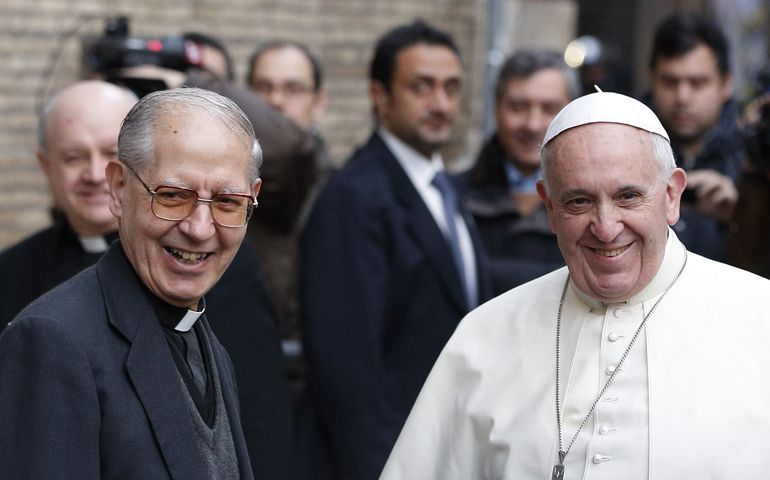 Fr. Adolfo Nicolas, superior general of the Society of Jesus, and Pope Francis in a 2014 file photo. (CNS/Paul Haring)

Vatican City — Delegates taking part in the upcoming election for the new global leader of the worldwide Jesuit religious order say they will be searching for someone who can best respond to the unique challenges facing people today.

Several electors, numbering among the 215 priests and brothers who will begin the election process Sunday, also say there is an increased probability the new superior general of the order will be of African or Asian descent.

"The most important thing really is how we frame the challenges of our times," Jesuit Fr. Antonio Moreno told reporters at the order's Rome headquarters Tuesday.

"What are the challenges, what are the needs of the church, of the society?" he said the Jesuits will be asking. "And what are the qualities of the general that would be a perfect match for this kind of need?"

Moreno, who is head of his order's province in the Philippines, spoke at a briefing organized to explain the process of the upcoming General Congregation, where he and the other global delegates will select someone to replace retiring Jesuit Superior General Fr. Adolfo Nicolas.

Nicolas, a native Spaniard who was elected at the previous General Congregation in 2008, informed Jesuits in 2014 that he would be stepping down after reaching the age of 80.

Speaking alongside Moreno Tuesday were Jesuit Fr. Orlando Torres, a Puerto Rican who is the rector of the Collegio Internazionale del Gesù, and Jesuit Fr. Federico Lombardi, former head of the Vatican press office and a Jesuit curial official.

Torres said the delegates coming for the congregation would be focusing on two main things: electing a new superior general and giving new direction for the life and work of the worldwide order, known formally as the Society of Jesus and founded in the 16th century by St. Ignatius of Loyola.

The Puerto Rican said the process of choosing the new leader is one of careful discernment and mentioned that for the first four days of their work the delegates will undergo what is called murmuratio, where they quietly speak in one-on-one settings with each other about what qualities might be useful in the next superior general.

Lobbying for individual candidates is forbidden, said Torres. The delegates are instead encouraged to seek wisdom in getting to know one another.

Lombardi, who is also a former head of the Jesuits' Italian province, focused on what he called the "extremely significant" demographic changes in the society in past decades.

While Lombardi said there has been a diminishment of the order's presence in some places in Europe and North America, he cited figures that more than 60 percent of new Jesuits in the initial steps of formation are now from Asia and Africa.

"We must consider ... that it is a society that is moving from the West towards African and Asia," he said. "This is rather significant."

According to figures released by the Jesuit curia, 32 percent of the electors for the General Congregation will come from Asia. Twenty-seven percent will come from Europe, 16 from Latin America, 15 from Canada and the U.S., and 10 from Africa. Sixty-two individual countries will be represented.

Citing those figures, Moreno noted: "Simply because there's been a shift to the Global South, there's a more probability the next general will come from that area, whether Asia or Africa."

Receiving special focus at this General Congregation is the fact that for the first time in history the Jesuits will be electing a new leader for their order under the wider leadership of a pope, Francis, who is himself a Jesuit.

Lombardi said that while he and other Jesuits feel a certain harmony with Francis they would simply serve anyone who is elected as pontiff.

Torres identified one difference in the election process for the superior general now that Francis is pope. Where past congregations would send someone to the Vatican on foot to inform the pope who the Jesuits had chosen as their leader, Torres said this time they will probably just call Francis on a cell phone.

One issue the new superior general will likely have to discuss with the pope is the status of Vatican Radio, the city-state's official broadcasting service. Under Jesuit management since its creation in 1931 by Pope Pius XI, its status has changed following Francis' reforms of the Vatican's communications structures.

Lombardi, who led Vatican Radio from 2005 until March, noted that the service has technically disappeared as an independent entity, as it is now is part of Francis' new streamlined Secretariat of Communications.

"We can imagine that the new superior general will speak with the pope to see if in the new situation the pope wants to say something specifically to the society, or if instead this mission is over," he said. "It seems to me clear that it will be a topic upon which the new superior general will occupy himself, in dialogue with the pope, to understand what his wishes are in this changed situation."

The general congregation starts Sunday with a 5:30 p.m. Mass at Rome's Church of the Gesù, the renowned 16th century structure that serves as the mother church of the Jesuit order and contains Ignatius' remains and the right arm of St. Francis Xavier.

In a sign of friendship with another religious order, Fr. Bruno Cadore, head of the Dominican order, will celebrate the opening Mass.

Discussions at the congregation will take place in three official languages -- English, French and Spanish -- with the aid of simultaneous translation services.

The deliberations will take place in a newly built hall at the Jesuit curia, in which the seats have a circular orientation to help facilitate conversation. There are four panel paintings in colors of orange and red decorating the wood-accented room, each giving reference to a biblical verse or a phrase from Ignatius' famous spiritual exercises.

The first of the panels gives Ignatius' motto: "In all things to love and to serve."