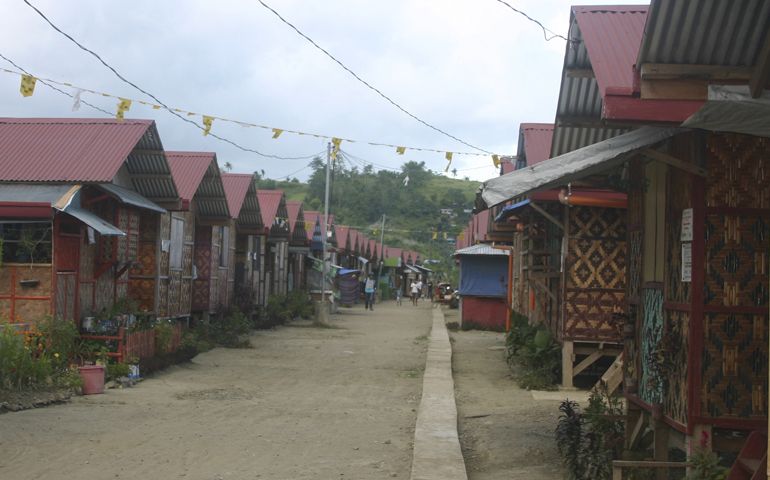 Houses in Utap, the transitional relocation site where Josefa Alvero lives with her family. (Joanna Gardner)

Tacloban, Philippines — When Josefa Alvero heard warnings of the approach of powerful Super Typhoon Haiyan in November 2013, she immediately evacuated the tiny house in the city of Tacloban on the Philippines' eastern seaboard where she had lived for 30 years. When she fled with her husband and two young children, she left behind most of their possessions and the stock of a small business selling Avon products she had used to support her family.

They piled into a school-turned-evacuation center, where up to 15 families crowded into a single elevated classroom, and waited.

At the time, Haiyan was the strongest tropical cyclone at landfall in recorded history, with 195-mile-per-hour winds (a record surpassed by Hurricane Patricia in Mexico in fall of 2015). Across the archipelago, the typhoon took more than 6,300 lives.

In the months that followed, families began the slow work of rebuilding the more than a million damaged or destroyed homes, with assistance from the government and international nongovernmental organizations.

But Alvero, whose house and business were completely destroyed, was not eligible for rebuilding assistance. Her house had been built on government-owned land, close to the coastline. Even though they had lived there for decades, Alvero and her family had no legal rights to the land; they were squatters.

Told that the government would relocate them, they waited. For the next nine months, they would live with 120 other families in the crowded school building evacuation center where dozens of their neighbors had died.

Forty percent of those affected by Haiyan were already living below the poverty line when the storm struck, according to a 2014 study by Oxfam, a British-based development agency.

Many of these were informal settlers living in hazardous coastal zones. They depended on proximity to the water for their livelihoods as fisher folk or fish vendors, or they worked in the nearby urban centers. A 2011 report by the U.S. Agency for International Development estimated that a third of the Filipino population lives in informal settlements.

Following the typhoon, the government moved to enforce "no-dwelling zones," prohibiting homes from being constructed within 40 meters of the coast in an attempt to prevent people from rebuilding in hazardous areas. The government pledged to relocate some 200,000 households, or more than a million people, that had been living in these zones prior to the storm.

To discourage the settlers from rebuilding in the no-dwelling zones, nongovernmental organizations were prohibited from providing them with rebuilding assistance at the sites of their former houses.

But relocating so many people has proven a logistical nightmare. The legal backing and enforcement of the no-dwelling zones is patchy. Suitable land to relocate informal settlers is scarce and what does exist is far away from settlers' livelihoods. A year after the typhoon, only a few hundred households had been relocated. Today, more than two years later, thousands of people are still waiting.

Many simply moved back into the no-dwelling zones and took rebuilding into their own hands. These already poor and vulnerable people now live just as exposed to disaster in weak shacks that will be no match for the next typhoon.

For Alvero and her family, the nightmare came to an end a little over a year ago. Today, they live in another part of Tacloban in a tidy community of 180 strong, wooden elevated houses.

Children run among the rows laughing and playing. Neighbors wearing blue vests, the volunteer security patrol, wander the streets chatting. Small stores sell snacks and supplies. Houses are bright with paint that owners have used to personalize their residences and flower gardens overflow.

Alvero owns the house and the land is a legal lease. The settlement is close to the inner city so her husband has been able to keep his job at a Coca-Cola plant. Best of all, she is safely inland and her house has been built to withstand the winds of a typhoon.

"This is a big difference from the evacuation center. We have privacy; we have single latrines and electricity and water," Alvero said.

It's not just the amenities of her new home that she loves; it's also her community.

"I have so many friends now," she said. She was recently voted into the community's leadership as secretary.

This "transitional relocation site" is one of six that Catholic Relief Services has built in some of the areas hardest-hit by Haiyan. For 356 families (1,737 individuals) affected by the typhoon, the temporary communities provide a short-term housing solution.

It's one of three two-year options CRS offers these households. Families can choose a two-year rental subsidy option to rent an apartment in a safe part of town. Or they can identify a host family to move in with and CRS will pay for the host to repair, extend or update their shelter.

The transitional relocation sites, by contrast, are communities constructed by CRS on land they lease for a maximum of two years. The houses are built to typhoon-resistant standards, but are also constructed to be temporary. The families who own them will be able to disassemble them and take the materials with them when they move.

"It's a way to get people out of the no-dwell zone, where they can get away from reliving the trauma every time there's a typhoon that they'll be washed away," said Vilma Horca, CRS's team leader for social mobilization, who oversees Alvero's settlement.

The beneficiaries of all three options play an active role. Alvero was part of the leadership group who negotiated with landowners for the land she lives on now. They were denied three times before finding a landowner who would agree to lease the land at a fair price.

Part of the reason landowners are convinced to allow informal settlers to move onto their land is that CRS advocates with local government officials to ensure that these settlers are some of the first in line for the relocation sites when they finally open. CRS helps the families in the settlement submit their applications and other paperwork for relocation.

The fact that the temporary housing program only requires a two-year lease has also made it easier to find willing landowners.

Alvero and her family celebrated their one-year anniversary living in the settlement in October. They have been approved for relocation by city government to a site that was supposed to have been completed this year, but there was a water supply issue and they are still waiting. With one year left on the lease, Alvero thinks it will be enough time, but she will be sad to leave.

Meanwhile, CRS is working to take a little bit of the permanent relocation process into its own hands. By collaborating with the Palo archdiocese, the program is working to purchase land large enough for 1,000 households and close enough to settlers' livelihoods.

Owned by the archdiocese, the land will initially be leased to relocated tenants, who will be placed on a track to eventually assume legal ownership of their plot.

Informal settlements are a growing phenomenon around the world. For development agencies like CRS, contending with land ownership is a central concern of post-disaster recovery.

"What CRS and other NGOs have discovered is that when creating these shelter teams [to rebuild after a disaster], it's not enough to just have the technical capacity to build the homes," said Beth Carroll, head of CRS's urban programs in Haiti. It's another country where land tenure issues were an obstacle to disaster recovery following a 2010 earthquake.

"You also have to add into that team capacity for legal understanding of the land tenure situation, capacity to work with the government agencies on these processes, and time and money to work through those systems and make the negotiations for the affected parties," she said.

As the urban population grows, so does the world's population of informal settlers. Usually densely populated, with limited access to social services, perched along coastlines or in urban centers, these communities are particularly vulnerable to disasters. As climate change contributes to a gradual increase in the frequency and ferocity of natural disasters, informal settlers stand to lose the most.

Joshua Kyller, CRS's emergency response coordinator for the Philippines, has observed that for informal settlers, living in these communities is a choice born of necessity, but one that makes many fearful of the future in the wake of a disaster like Haiyan.

"They saw what happened, they want to leave," he said. "But they lack options where to go."

[Joanna Gardner is a 2015 Egan Journalism Fellow with Catholic Relief Services, which sponsored her trip to the Philippines. ]