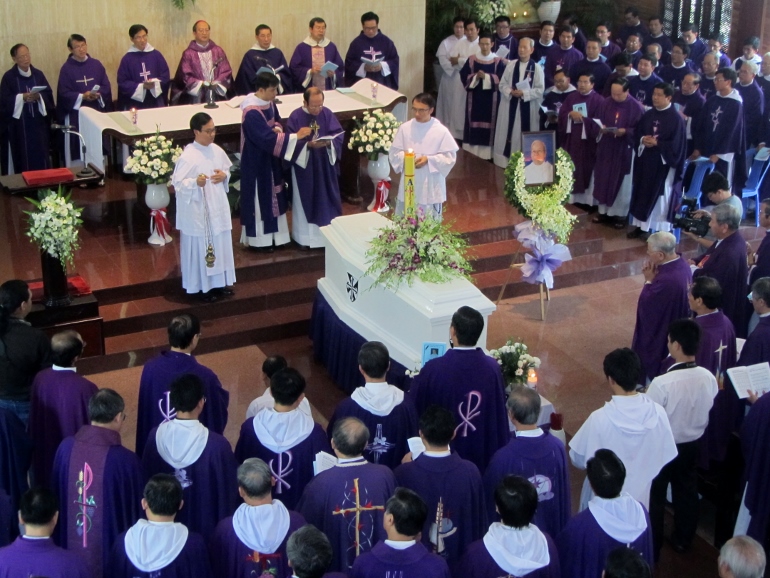 A Dominican priest who spent his whole life reconciling local Catholics and communists and working for a more humane and democratic society in Vietnam was laid to rest Feb. 17.

“He (Fr. Cam) tried to bridge the divide between local Catholics and communists, helping them understand one another and be in harmony to serve the people,” said Vuong Dinh Bich, a Catholic lawyer.

Bich, 70, told NCR at the deceased priest’s funeral that some people were suspicious about Fr. Cam’s close engagement with the government and called him “the red priest.” He cleared up the misunderstanding by pointing out that the priest became socially active after he was inspired by the first pastoral letter issued by Vietnamese bishops in 1980, five years after North Vietnam and South Vietnam were reunified under communist rule.

Bishops from throughout Vietnam met in Hanoi for the first time since the establishment of the local hierarchy in 1960 and published the letter urging Catholics "to live the Gospel in the midst of the nation in order to serve the happiness of our compatriots.” This has become the motto of the local Catholic Church for decades.

Fr. Cam was among the first priests to join the Catholic Committee for Solidarity and the Vietnam Fatherland Front, both government organizations. These organizations aim to unite all people regardless of their backgrounds in supporting the socialist political system, strengthening ties between the people and the communist party, and monitoring the state agencies' activities.

He attended conferences and workshops held by the government to present Catholic teachings and viewpoints to others, and he wrote articles criticizing the government’s restrictions on freedom of worship, speech, press, thought and expression. He also promoted democratic values and called on citizens to build a humane society.

Until his death he was a regular contributor to Cong Giao va Dan Toc (Catholicism and Nation), a government-approved weekly publication based in Ho Chi Minh City.

After 1975, religious activities were restricted or banned, church properties were confiscated and Catholics were prevented from studying at universities and colleges or working at state organizations. Local Catholics were suspected of supporting Western countries and of fighting against the communist government.

Bich said government authorities acknowledge Fr. Cam’s efforts in the process of reconciling the government with Catholics and helping them to gradually understand their activities. The government started to ease their religious policies in the 1990s and has returned some of the seized church properties.

He said there is convincing evidence that government officials visited Fr. Cam while he was in the hospital and also attended his funeral. President Truong Tan Sang even sent a wreath and words of consolation.

Joseph Nguyen Van Xuan, who led a group of Catholics to offer incense in front of Fr. Cam’s picture, said the deceased priest taught catechism to his wife and other people who are non-Catholics. He also gave them and their children Biblical lessons and spiritual guidance to overcome challenges in their own life.

“He set a shining example to us of being a real Catholic in difficult situations,” Xuan, 54, father of two, said. He quoted the priest as saying, “The church should open its doors to all people, even if it may get dusty, rather than being a closed church.”

Fr. Cam wrote many books and articles providing solid foundations for Vietnamese theology, according to a story in the Cong Giao va Dan Toc weekly by Nguyen Ngoc Bich, an attorney and his friend.

Bich said Fr. Cam, whose priestly motto was, “I am encouraged by Christ’s love,” also composed good folk hymns. One of his songs was sung at his funeral: “Goodbye to everyone! I leave for the last time, never to return. See you in heaven.”

Born in the northern Nam Dinh province in 1933, Fr. Cam fled to the south and joined the Dominicans in 1956. He was sent to study in France and was ordained a priest in 1964. He also obtained a doctoral degree in philosophy. After returning home, he taught at local universities until 1975. He also taught at church-run institutes and worked with other people to translate Scriptures into Vietnamese.