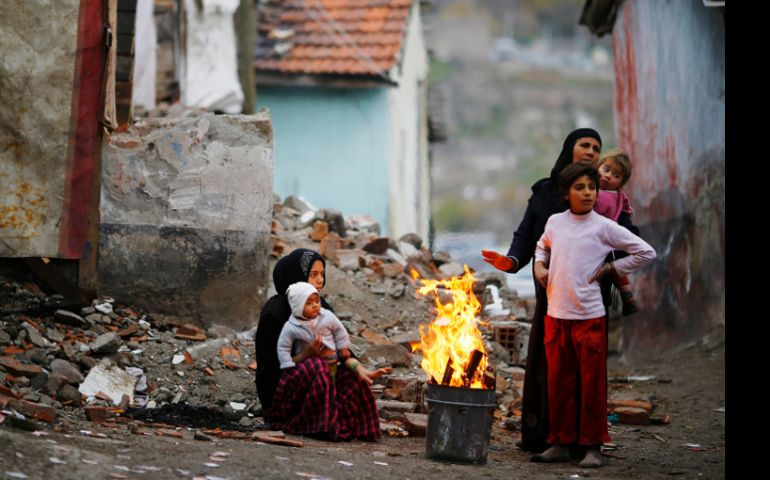 Syrian refugees warm themselves around a fire Dec. 3 in Ankara, Turkey. (CNS/Reuters/Umit Bektas)

Washington — The story of the Middle East in 2014 is one of war and displacement, broken families and tireless aid workers, and the rise of a new group one scholar referred to as "al-Qaida on steroids."

It's a story of populations stretched to the limit, but still welcoming more refugees as neighbors. And it's a tale of religious leaders calling for prayer, meeting for dialogue and urging an end to the violence.

The continuing civil war in Syria created what Antonio Guterres, the U.N. High Commissioner for Refugees, called "the defining humanitarian challenge of our times." His agency estimated in December that more than 3.3 million Syrian refugees lived in the neighboring countries of Lebanon, Turkey, Jordan, Iraq and Egypt.

Amid the migration of Syrians to neighboring countries, a group calling itself the Islamic State began driving Christians, Yezidis and even Muslim minorities from parts of Syria and Iraq. The minorities told stories of the Islamic State group cutting off electricity for weeks ahead of the main troops' arrival. When the militants arrived, minorities were told to convert to Islam, pay a protection tax or be killed.

Mary Habeck, associate professor in strategic studies at Johns Hopkins School of Advanced International Studies in Washington, described the Islamic State, and its parent group, al-Qaida, as "merchants of violence" trying to "use Islam for their own purposes." The groups are "a very tiny group of extremists that have decided that they understand what Islam is, and they are going to force the rest of the Muslim-majority world in their direction."

After capturing Mosul, Iraq, in June, the Islamic State group declared a caliphate, or Islamic empire. Habeck said the group views itself as "the only legitimate government in the entire world."

Faced with the choice of renouncing their faith or being killed, hundreds of thousands of Christians and other minorities in Iraq's Ninevah province fled Mosul to places like Qaraqosh. Later, as Islamic State fighters advanced, the minorities fled again to cities like Irbil, Iraq, where they slept in churches or in tents in parks and on the streets.

The mass migration of Syrians and Iraqis -- combined with Palestinians left homeless after a 50-day Israeli incursion into the Gaza Strip, created a huge challenge for international aid organizations, including those run by the Catholic Church. Most refugees in the Middle East do not live in camps, but in local communities. This placed a strain on the host countries.

Church agencies focused on helping those communities. For instance, between August and early November, Caritas Jordan registered 4,000 Iraqis; the agency helped more who did not register.

Lebanon, a country 70 percent the size of Connecticut, has a population of 4 million and hosted 1.5 million additional refugees.

Jordan, slightly smaller than Indiana, with a population of 6.5 million, recognized 44 different nationalities as refugees. From 1921 to 2011, Jordan had a $10 billion deficit; since the Arab Spring began in 2011, it has picked up an additional $10 billion deficit.

Although the Jordanian government welcomed those fleeing, for the past three years it said that 30 percent of any aid going to help Syrian refugees must help the host community. It set similar quotas when Iraqis began fleeing to Jordan in 2003, at the start of the U.S.-led invasion of Iraq.

Christian aid agencies tried to coordinate their work, focusing on various aspects of aid: One agency might help with mattresses and personal items; another might help with education.

In July, the Catholic aid agencies met three times in as many days, planning for Gazans' psychosocial and material needs.

"We are talking about a massive number of people who will be in need of help, and of at least 200,000 children who will need intervention," Sami El-Yousef, regional director of the Jerusalem office of the Catholic Near East Welfare Association, told Catholic News Service in July.

During a May visit to the Holy Land, Pope Francis made an unscheduled stop to pray for peace before the controversial separation wall built by Israel throughout the West Bank land. He invited Israeli President Shimon Peres and Palestinian President Mahmoud Abbas to the Vatican to pray for peace.

Throughout the year, he made repeated calls for peace in the Middle East. In early October, he met with the region's apostolic nuncios and top Vatican officials; later that month, he included a discussion on the Middle East during the Oct. 20 consistory of cardinals in order to let the region's seven patriarchs, who were taking part in the Synod of Bishops, also attend the proceedings.

At that meeting, Pope Francis said the Middle East was experiencing "terrorism of previously unimaginable proportions" in which the perpetrators seem to have absolutely no regard for the value of human life.

The Mideast Catholic and Orthodox patriarchs as well as bishops from North America, Europe and Oceania visited the Holy Land and northern Iraq to express solidarity with their fellow Christians. And although patriarchs expressed concern about Christians fleeing the violence in northern Iraq, laypeople were not the only ones leaving the advance of Islamic State: Twelve Chaldean religious men and priests living in the United States, Canada, Australia and Sweden were suspended from exercising their priestly ministry for not receiving permission from their superiors before emigrating from Iraq.

Once the Iraqis and Syrians fled, they hoped for resettlement in another country. One refugee described waiting for resettlement as "miserable days doing nothing." Almost all Iraqis interviewed by a variety of news sources said they would not return to their country.

Fr. Rifat Bader described the refugees: "They are teachers. They are normal people, very kind people." Faith "is a part of their identity."

The Iraqis, he said, "are knocking at the doors of the embassies" trying to get resettled. But after their initial appointment, they were being forced to wait six months for a second appointment, he said.

Pope Francis and workers in Genoa