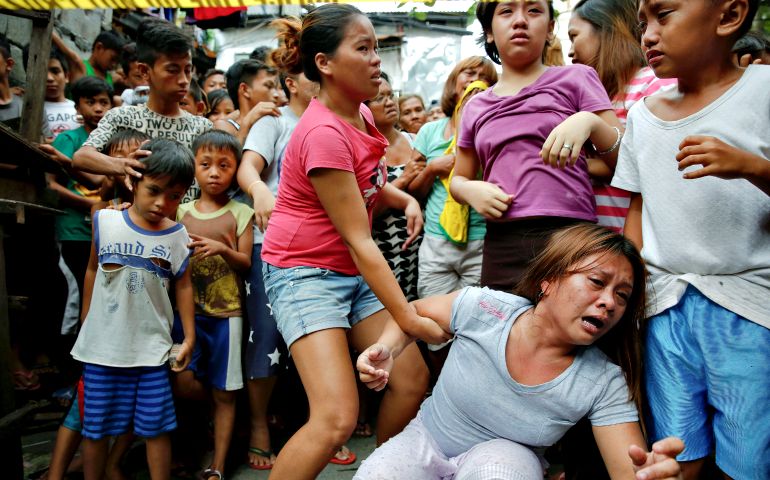 Janeth Mejos reacts as the body of her father is taken out of their home shortly after he was killed in a police operation in Manila, Philippines, Oct. 14. (CNS/Reuters/Damir Sagolj)

Killarney, Ireland — An Irish missionary who has championed the protection of women and children from sex slavery in the Philippines has criticized the Filipino bishops for their failure to speak out against the rising death toll of President Rodrigo Duterte's war on drugs.

Speaking to NCR when he was in Ireland recently to receive the 2016 Hugh O'Flaherty International Humanitarian Award, Columban Fr. Shay Cullen said only six Filipino bishops have "said anything against this war on drugs and the killings."

Since Duterte assumed office in June, as many as 3,500 people have reportedly died as a result of the president's campaign against suspected drug addicts and the illegal drugs trade.

As he was taking office, Duterte warned that his tenure would be "bloody" and, according to Cullen, "there is a general acceptance of this." He expressed disappointment that "people are not thinking about what they are approving" while the church, he said, had "not really" campaigned or taken a stance.

However, Cullen paid tribute to Archbishop Socrates Villegas of Lingayen-Dagupan, who in a pastoral letter last September read out in churches across the Philippines, said, "We can fight criminality without killing the offenders. Who are we to judge that this offender is hopeless?"

Villegas, who is president of the Catholic Bishops Conference of the Philippines, stressed, "Death ends all possibilities to change." He underlined that the goal of justice is not revenge but the restoration of harmony.

"Duterte has threatened the church and called them [the bishops] cowards and hypocrites," said Cullen, who founded the PREDA Foundation (People's Recovery, Empowerment and Development Assistance) in 1974 to assist abused children. "He has said he knows all the bishops that have mistresses and he will call them out in public one day, so I think the institutional church is a bit intimidated."

Acknowledging that it is "a difficult time" for critics of Duterte to be "open and critical," Cullen said that nevertheless "we have to stand by the principles we declare we believe in." The media's challenge to the war on drugs was giving people a "little more courage," but church leaders had to "take the risk" despite the dangers, he said.

Cullen described the current situation in the Philippines as "grave" in his Nov. 5 acceptance speech in Killarney for the Hugh O'Flaherty Humanitarian Award.

"The truth is that state-sanctioned executions of young people suspected of being drug users or dealers has reached a high of about 3,500 murdered since 30 June. The killing goes on," he said.

"We have to take a stand against these violations and stand for the value of life and due process of law and the principle that all are innocent until proven guilty. Otherwise, not only are more suspects vulnerable but we are all vulnerable if death squads are allowed to have their murderous way."

His criticism wasn't restricted to church leadership. He also drew attention to the complacency of wider Filipino society.

"Too many Filipinos believe it is OK for the death squads and police to kill the 'suspects.' Anyone can be branded as a 'suspect' and disappeared. It is the end of a country if the rule of law and due process are ignored and the judicial system, faulty as it is, bypassed. Education on the constitutional right to life and freedom is more vital than ever to save the dignity of people," he warned.

The priest, who was ordained in 1969 and has been based in the Philippines ever since, made similar comments in an Oct. 15 article he wrote for The Manila Times. He sent a strong message in the article to church leaders and civil society about their failure to stand up to "populist upstart politicians who promise an anti-establishment agenda to bring about a disciplined crime-free or immigration-free new society."

He said church leaders are "failing to promote and live out in a relevant way the values of religion that are based on human dignity, compassion, and justice, equality and universal human rights. So we have society striving for a true democracy but they get a pseudo-democracy, which has few of these basic values."

Cullen noted that democratic societies are increasingly feeling the challenge of a rising wave of civil discontent with many traditional politicians.

"These opportunistic politicians around the world are using the genuine anger of those left behind economically and politically as a surfing wave to autocratic rule. They make outlandish promises, bully their way to prominence, and grab media attention with outrageous comments and threats."

"Valid complaints such as the social inequality, the ever-widening gap between the few rich and the many poor, is fertile ground to make them populist."

The PREDA Foundation was set up in 1974 for the children Cullen rescued from sex slavery in Subic Bay, where a large U.S. naval base then operated.

He was instrumental in getting the naval base closed down by lobbying for the children born to poor single mothers exploited by U.S. Navy personnel, who were also the main clients of the thriving local sex industry.

Cullen later brought a lawsuit against the U.S. Navy to force it to support the children fathered by naval personnel and as a result, the U.S. government provided funds for thousands of Filipino-American children who had been abandoned when the naval base closed.

However, sex tourism continues to boom in the Subic Bay area and the threat to women and children today comes from Western tourists as well as tourists from other southeast Asian countries.

According to Cullen, the Filipino government rarely prosecutes and, in some cases, protects the pedophiles who prey on impoverished Filipino children.

Cullen has been nominated three times for the Nobel Peace Prize, and has received several awards in a number of countries for his campaigning work.

The person who nominated him for the Hugh O'Flaherty award, Matt Moran, highlighted that the 73-year-old priest has endured opposition, harassment, intimidation and a failed effort at deportation because he has challenged the status quo of a corrupt elite.

"He has and continues to risk his life in service to the poor and marginalized," said Moran, author of The Legacy of Irish Missionaries Lives On.

The Hugh O'Flaherty International Humanitarian Award is named after Msgr. Hugh O'Flaherty, known as the "Scarlet Pimpernel of the Vatican" during World War II for his ability to outfox Nazi efforts to capture him by using fake IDs, disguises and operating a communications network inside and outside the Vatican.

The Irish priest gave refuge to 6,500 Jewish refugees and Allied POWs, hiding them in houses, convents and monasteries across Rome and even inside the Vatican itself.

Moran said O'Flaherty risked his life to save lives during World War II.

"I saw the clear link between the lives and work of these two men. That was what motivated me to nominate [Cullen] as a good fit for this award," he said.