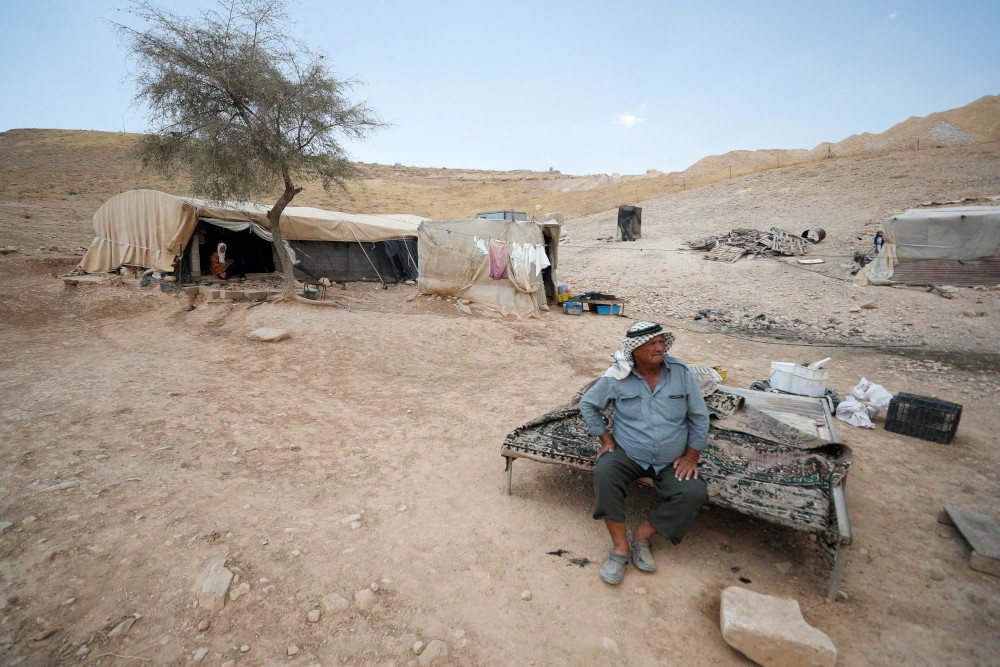 A Palestinian Bedouin sits near his tent near Jericho in the Israeli-occupied West Bank June 27, 2022. New Zealand bishops are calling for an end to Palestinian suffering in the Holy Land. (CNS photo/Mohamad Torokman, Reuters)

Saying they feel anguish that the Holy Land continues to be riled in "turmoil, bloodshed and fear," New Zealand's Catholic bishops called for a renewed effort to achieve lasting peace for "ordinary Palestinian peoples" and others living in the troubled land.

The bishops, in a statement released July 13, expressed their deepest concern for Palestinians who for decades "have been reduced to the status of refugees in their own homeland."

"Attempts to find a lasting peace in the Holy Land that would provide security for Palestinians and the ordinary people of Israel have remained elusive, seemingly utterly so," the bishops said. "While there may have, at times, been goodwill, there has been no lasting way forward."

Noting that the long-standing proposal for a "two-state solution" under which an independent Palestine would exist alongside Israel "remains just ... a concept," the bishops lamented that "illegal settlements on Palestinian land in the West Bank" continue to be established.

They noted that international law has required that the West Bank, which Israel has occupied since the 1967 Arab-Israeli War, must be returned to the Palestinians "as the heartland of their own state."

The bishops also pointed to Pope Francis' oft-stated concern that progress is lacking in rebuilding trust and overcoming hatred and resentment so that peace can be realized between Israel and Palestine, allowing two states to exist side by side.

"The Catholic bishops of Aotearoa New Zealand strongly support Pope Francis in that call. The conflict in the Holy Land cannot be allowed to continue with no serious moves toward finding a just and peaceful solution for the peoples of Israel and Palestine, but particularly for Palestinians, whose long years of turmoil, occupation, blockading (as in Gaza) and impoverishment are a blight on the region and indeed on humanity," the bishops said.

In addition, the bishops said they concur with the pope's call for a more vigorous effort by the international community to "reactivate dialogue in order to achieve a two-state solution" as well as to preserve Jerusalem's identity as a holy place for Christians, Muslims and Jews.

Catholics can "do more" to encourage such dialogue, they said, by expressing support "not just for peace, but for a continued Christian presence in Jerusalem."

The bishops also urged the New Zealand government to call for and build support for world leaders to meet and discuss "ways to bring a lasting just peace to Israel and Palestine."

Recalling their 2002 statement on the Israeli-Palestinian conflict in which they wrote that "no amount of repression, occupation or military force can dim the desire of a people to live with dignity and freedom in their homeland," the bishops expressed sadness that little has changed in two decades.

In that statement, the bishops affirmed the right of the Palestinian people to find "dignity and freedom through the establishment of an independent state, which surely can be denied them no longer."

"Their freedom will also be freedom for Israel -- freedom from fear, and the opportunity to move on from a conflict which has haunted the state of Israel since its birth. Justice will bless both peoples with peace," the 2002 statement said.

The bishops concluded their latest statement saying, "It is a matter of terrible sorrow that little has happened to move on from that conflict in the 20 years since we wrote that, and our words as written then need to be stated again today."