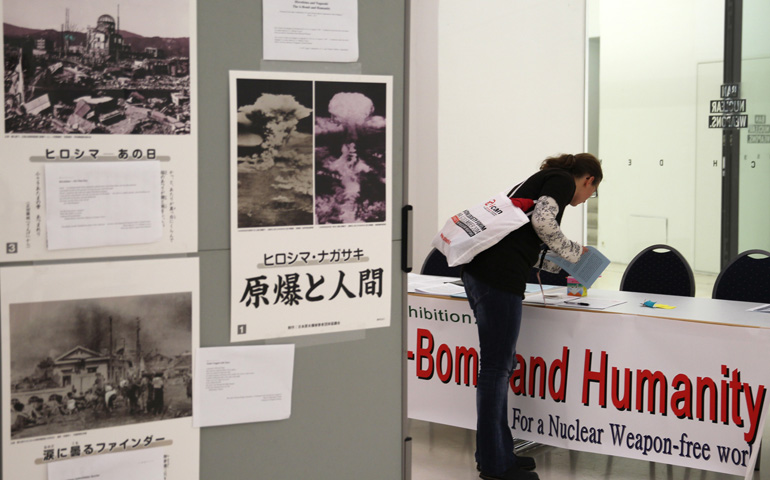 A woman picks up literature at the International Campaign to Abolish Nuclear Weapons' Civil Society Forum in Vienna on Dec. 6. (CNS/Chaz Muth)

Pope Francis did not travel to Vienna for two high-profile nuclear disarmament conferences beginning Dec. 6, but his name was called out frequently during the events.

Many of the speakers and participants of these forums said they were looking for someone with the kind of star power held by the popular pope, someone trusted worldwide, who can assist them in furthering their cause to help rid the world of nuclear weapons.

"[Pope Francis] could be a uniquely influential figure in reducing the risk of a nuclear holocaust," said investigative journalist Eric Schlosser, author of the book Command and Control: Nuclear Weapons, the Damascus Accident, and the Illusion of Safety.

Schlosser was a speaker at the Dec. 6-7 International Campaign to Abolish Nuclear Weapons' Civil Society Forum, considered a no-nukes rally before the start of the Dec. 8-9 Vienna Conference on the Humanitarian Impact of Nuclear Weapons.

"I think Pope Francis would be even better than Taylor Swift," he told Catholic News Service during an interview Sunday in Vienna. "I don't think you could find a stronger voice for the need for morality between states and compassion for ordinary people.

"I think he's been a tremendous pope, and I hope he will speak out on this issue," he said.

That sentiment was echoed throughout the first, and smaller event, which was attended by more than 600 people, mostly men and women in their 20s who traveled from all over the world to push their agenda for a world free of nuclear weapons.

The pope is a symbol of religion, and the role of religions are needed more than ever to deal with the existence of nuclear weapons, said Christopher Weeramantry, a retired judge from Sri Lanka, who sat on an interfaith panel at the ICAN forum discussing how faith communities can draw attention to their cause.

Christians, Buddhists and Muslims were represented on the panel.

"All religions advocate kindness and assistance to our neighbors," Weeramantry told a packed room of potential leaders of the no-nukes movement. "Nuclear weapons offend every principle of all religions."

In his book, Schlosser details numerous documented near-nuclear disasters in the U.S. that occurred from mistakes in storing and handling the national arsenal of weapons.

Should two countries engage in nuclear attacks, the devastation wouldn't be limited to the thousands who would die from the initial blasts or the cities that would be reduced to rubble, said Ira Helfand of International Physicians for the Prevention of Nuclear War.

The environmental impact of such nuclear attacks would create an ecosystem similar to an ice age, halt agricultural production, trigger massive food insecurity for a decade, and potentially cause billions to die of starvation, Helfand told the audience.

"There is a possibility that we would become extinct as a species" under these conditions, he said.

During an open discussion about the moral implications of nuclear weapons, participants said they wanted to see more church communities take up the nuclear disarmament cause, saying that many people in their 20s or younger did not live through the Cold War and do not have an urgent fear of these weapons.

Members of the World Council of Churches, United Religions Initiative, Religions for Peace, and the Global Security Institute led the discussion.

Participants said their church communities needed to help politicians come to the conclusion that nuclear arsenals do not keep countries safe, but create a greater risk of a nuclear holocaust, where the lives of civilians are at risk from the 17,000 nuclear bombs held by several countries, including the U.S., Russia, China, India, Pakistan, North Korea, Israel and Britain.

The young campaigners heard a first-hand account of what weapons like this can do to the people of a city.

Setsuko Thurlow was a 13-year-old girl living in Hiroshima, Japan, Aug. 6, 1945, when the atomic bomb was dropped on her city.

Thurlow described the smell of burning flesh, the sight of people holding the eyeballs that had fallen out of their head, walking over dead bodies, trying to care for the dying, and then experiencing the stigma that comes when you are a survivor of such a horrific event.

Participants were reminded that spirituality and the strength of prayer could help them organize the masses in the nuclear disarmament cause and said they were looking to their religious leaders to be their shepherd in this pursuit.