Number of hungry in the world tops 1 billion 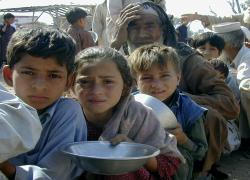 GENEVA and ROME -- Despite record high grain crops, the number of undernourished people in 2009 reached the historic high of 1.02 billion, about 100 million more than in 2008, according to the U.N. Food and Agriculture Organization and a coalition of religious, human rights and development groups.

The increase in hunger, the coalition said, was caused by governments’ and international institutions’ failure to act.

The worldwide recession that started last year “pushed aside” the global food crisis, according to the report “Who Controls the Governance of the World Food System,” which was issued Oct. 12 by a coalition of groups, including the Ecumenical Advocacy Alliance, the Swiss Protestant agency Bread for All, and the FoodFirst Information and Action Network. In May, the Ecumenical Advocacy Alliance, an international network of more than 50 churches and Christian organizations, launched a global campaign on food.

The coalition’s report says that while trillions of dollars were allocated to save banks and insurance companies, only between 10 and 15 percent of the $20 billion pledged last year to support agriculture in developing countries has been allocated.

The director of the U.N. food organization, Jacques Diouf, addressed the Synod of Bishops for Africa Oct. 12. He said the growing number of hungry people in the world is “the result of choices made on the basis of materialistic reasons to the detriment of ethical references.”

“This results in conditions of unjust life and an unequal world where a small number of persons becomes richer and richer, while the vast majority of the population becomes poorer and poorer,” he said.

The bishops were meeting in Rome Oct. 4-25 (see Page 5). Although Diouf was there to speak about hunger and food security, it was also noted that he was the only Muslim invited to participate in the synod. He spoke of the importance of faith in building a better world.

The teachings of the Catholic church and of Islam urge believers to manage resources wisely, providing for the poorest and avoiding all waste and excess, he said.

Today’s world has the financial power, the technology, and the natural and human resources needed “to eliminate hunger in the world once for all,” he said, but first it must overcome the power of greed, corruption and selfishness.

The United Nations is holding a world summit on food security in Rome Nov. 16-18 and the Vatican announced Oct. 13 that Pope Benedict XVI would attend the opening session.

Diouf told the synod that he agrees with a key point in Benedict’s recent encyclical, Caritas in Veritate, namely that every economic decision has a moral consequence.

“The problem of food insecurity in this world is primarily a question of mobilization at the highest political levels so that the necessary financial resources are made available,” he said. “It is a question of priority when facing the most fundamental human needs.”

Particularly praising the work of the Catholic church, its charities and missionaries in Africa, Diouf underlined the role of faith in battling poverty.

“A planet free from hunger is what the miracle of an unshakable faith in the omniscience of God and of the indefectible belief in humanity can lead to,” he told the synod.

World | Number of hungry in the world tops 1 billion