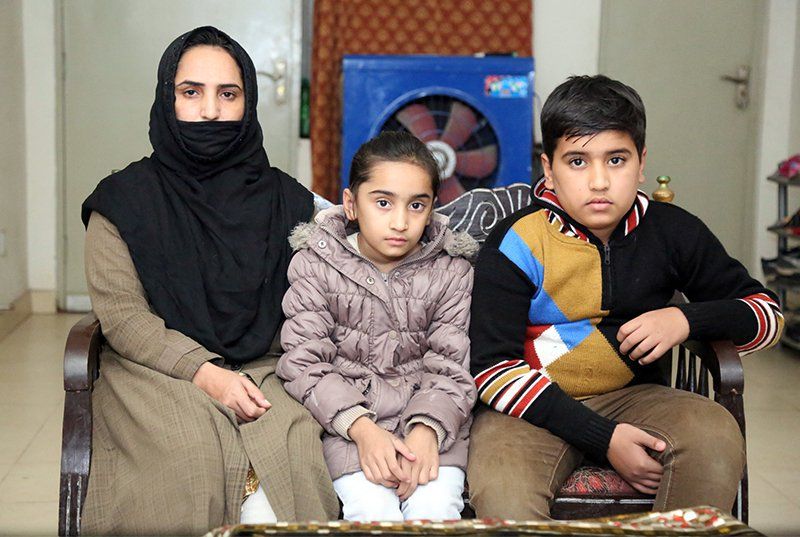 Ruby Tabbasum, left, the wife of an Ahmadi man who was killed in a hate crime in 2016, with her daughter, Huzaifa Ahmad, 9, and son, Amtul Mateen, 12, at their home in Rabwah, Pakistan. (RNS/Naila Inayat)

Lahore, Pakistan — A high court in majority-Muslim Pakistan has ruled that citizens must declare their religious affiliation before joining the civil service, military or judiciary. All birth certificates, identity cards, passports and voting lists must also indicate the person's faith.

The judgment, a victory for hard-line clerics pressuring the state to single out minorities in their midst, adds that all Muslim candidates for national or provincial assemblies must swear that Islam's Prophet Muhammad was the last of God's prophets.

This has spread fear among Christians, Hindus, Sikhs and other religious minorities already under pressure in the South Asian nation. Ahmadis, who believe another Muslim prophet came after Muhammad, feel especially targeted because they could not take the parliamentary oath.

"Already it is difficult for us as minorities to retain our government jobs. With this court judgment, we can forget whatever normalcy we had in our lives," said Ejaz Mall, 34, a Christian civil servant in Lahore.

"Many people will face socioeconomic exclusion if the order is implemented."

In its March 9 ruling, the Islamabad High Court argued that citizens should be easily identifiable by their faith and that applicants for public offices should declare their beliefs before being considered for employment.

Justice Shaukat Aziz Siddiqui, in a remark clearly aimed at Ahmadis, said it was "alarming that one of the minorities was often mistaken for being Muslims" because their names and general attire were like those of Muslims.

The court's ruling outraged human rights activists, who fear it would blackball minorities and lead to more persecution. The independent Human Rights Commission of Pakistan called on the government to counter it immediately.

"It is essential that the government acts in aid of its minority citizens by appealing this ruling," said Commission Chairperson Mehdi Hasan.

"Forums for justice such as the Islamabad court should play their due role in safeguarding the fundamental rights of the most vulnerable sections of society."

The ruling is the latest in a long series of attempts by officials to clearly distinguish between religions in Pakistan. A 1974 constitutional amendment declared the Ahmadis to be non-Muslims and a 1984 ordinance barred them from practicing Islam in public.

Although Ahmadi Muslims, also known as Ahmadiyya, believe in the Quran and Prophet Muhammad, many mainstream Muslims consider them to be heretics because they also believe their 19th-century founder, Mirza Ghulam Ahmad, was a latter-day prophet.

In 1992, lawmakers proposed indicating religion on official identity cards, but they dropped the idea when Christians protested.

Christians, the second-largest religious minority in Pakistan, comprise less than 2 percent of the country's 208 million population, followed by Hindus, then Ahmadis and the others.

Non-Muslims have faced discriminatory laws, violence and prejudice for decades in Pakistan. Earlier this year, the U.S. State Department placed Pakistan on its Special Watch List for severe violations of the religious freedom of minorities.

"Religiously discriminatory constitutional provisions and legislation, such as the country's blasphemy and anti-Ahmadiyya laws, continue to result in prosecutions and imprisonments," the report said.

Nasir Saeed, director of the Centre for Legal Aid, Assistance and Settlement, a Lahore-based group that advocates for religious minorities in Pakistan, said the government should promote harmony rather than further division.

The United States Commission on International Religious Freedom noted in its 2017 annual report that "the Pakistani government continued to perpetrate and tolerate systematic, ongoing and egregious religious freedom violations" in the previous year.

"Minorities, who are living under threat and are already fleeing the country, need to be assured of security, protection and equality," he said.

The campaign against Ahmadis has gained momentum in the run-up to Pakistan's general election slated for July. A new ultraconservative religious party shut down Islamabad for three weeks late last year in protests against a new election law that seemed to ease some restrictions on Ahmadis.

"These people are a threat to this country, its constitution and ideology. I want to bring a resolution to ban the recruitment of Qadianis (Ahmadi Muslims) in the armed forces of Pakistan," Safdar said at the time.

"A person who doesn't believe in the jihad in the path of Allah, that person cannot be a part of our pious army." 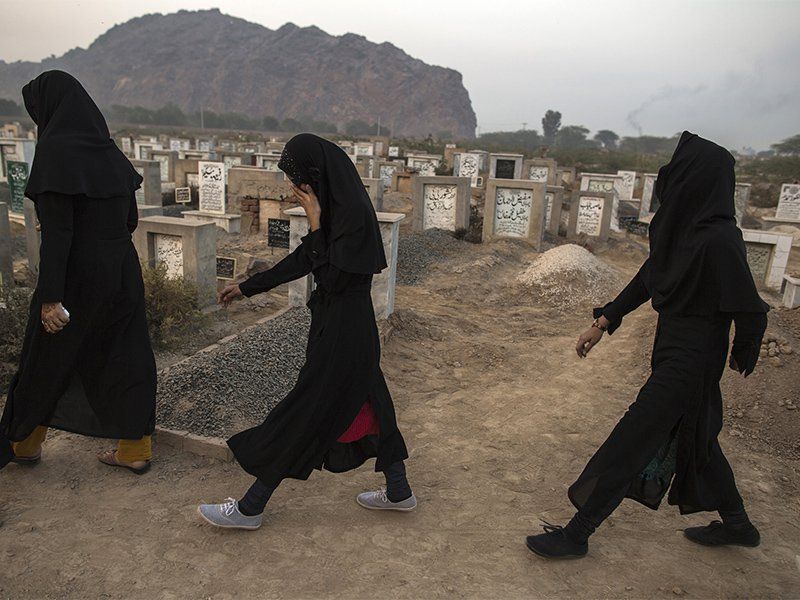 Ahmadi women walk past graves at the Ahmadi graveyard in the town of Rabwah, Pakistan, on Dec. 9, 2013. Three years earlier, 86 Ahmadis were killed in two simultaneous attacks on Friday prayers in Lahore. (Zohra Bensemra/Reuters)

"In 2016, my husband, Qamar ul Zia, was stabbed to death outside our house in broad daylight. His crime — he was an Ahmadi," said Tabbasum, who lives in Rabwah, a majority-Ahmadi city 100 miles west of Lahore that once hosted the community's international headquarters.

Zia was hounded for years by Islamists for supposed offenses like posting his father's name, Muhammad Ali, on his house gate or displaying the Arabic expression "mashallah" ("God has willed it") on the window of his mobile phone shop.

After a few assaults, a group armed with knives killed him as he was bringing his children back from school.

"I fear for my children. They know what happened to their father. They also know that they are not accepted in this society," said Tabbasum. "We left our home after the killing because the children were teased in the school for being Ahmadis."

Other minorities say they now feel as if they have an even larger target on their backs than they did before.

"Why should my religion be a business of the state? If my religion is mentioned on the identity card, that makes me even more vulnerable as a minority," said Asher Daniel, 19, a university student in Lahore and a Christian.

"Now even getting a parking or red-light ticket for me will become dangerous. When I show my identity card, it will have my religion on it."

Religious freedom in crisis around the world