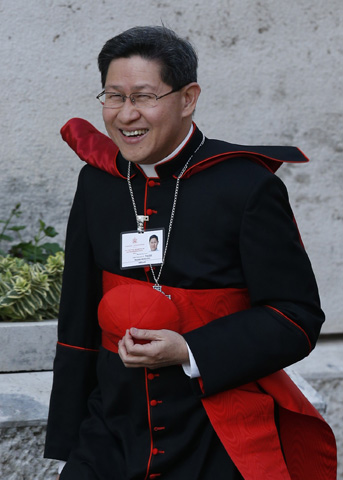 Cardinal Luis Antonio Tagle of Manila, Philippines, arrives Monday for the opening session of the extraordinary Synod of Bishops on the family at the Vatican. (CNS/Paul Haring)

The separation of married couples is a huge issue in the Philippines and other parts of Asia, not because of divorce but because poverty pushes couples to separate in search of jobs abroad, said Filipino Cardinal Luis Antonio Tagle of Manila.

While he hopes the pastoral care of divorced and civilly remarried couples is debated openly and with good will, he said he also hopes members of the extraordinary Synod of Bishops give appropriate consideration to the impact of poverty and migration on families and to a host of other issues that help or hinder family life.

Tagle, who is one of three presidents Pope Francis appointed to guide the synod assembly Oct. 5-19, spoke to Catholic News Service on Saturday.

"Poverty is not just an external context" for family life, but it "affects relationships," he said. "One dramatic effect of poverty is migration. De facto there is separation of couples and separation of parents from their children, but not because they could not stand each, not because there is a breakdown in communication, not because of conflicts. They get separated because they love each other and the best way for some of them to show concern and love and support is to leave and find employment elsewhere."

Working overseas is such a normal part of Filipino life -- and the money overseas workers send home is such a significant part of the Philippine economy -- that the country's president's office has a special Commission for Filipinos Overseas; up to 11 percent of the county's population is living and working abroad. The top five destination countries are: the United States, Saudi Arabia, Canada, the United Arab Emirates and Australia.

The separation of families "definitely creates a wound and leaves a wound," the cardinal said. Obviously the children suffer because of their parent's absence, but the parents suffer from not being present in their children's lives and they are challenged to remain faithful to spouses they may not see for years.

Tagle said he gave a speech at a youth camp in his former diocese of Imus. At the end of his talk, rather than asking questions, several young people asked him to sing. He told them he would, but only after responding to questions about his talk.

A year later, a boy who had been present, had asked the cardinal to sing and then had the cardinal autograph a T-shirt told the cardinal he puts the shirt under his pillow each night. The teen said he had not seen his father, a foreign worker, in many years, but the T-shirt reminded him he still had a father and still had a family -- the church.

"When they ask me to sing, is it just a song? Or are they children wanting to hear [something] like a lullaby?" the cardinal said. "They have not probably heard their mothers or their fathers singing to them. Is this a child's cry?"

The cardinal said that because of migration, the airport "has become a traumatic place for me -- not because of my travels and the dangers -- but to see and hear especially mothers talking to their children in the airport, bidding them goodbye, and you can see how their hearts are broken. And then you wonder what kind of strength they need and you just pray, 'Lord give them strength.' "

"We hope these realities can be brought to the synod," he said. Migration is a concern for many poor countries, but it is also a pastoral challenge for the church in host countries; pastoral programs must provide those Catholics with a welcome, assistance and support, including for keeping their family bonds strong.

Turning to the question of the pastoral care of divorced and civilly remarried Catholics, Tagle said, "debate is healthy." He said he has asked several people their reaction to the very public discussion of some cardinals proposing or opposing finding a way to allow some civilly remarried Catholics to receive Communion even if their original unions have not been annulled -- something not currently foreseen under church law.

"Some are very happy that finally this question is being addressed" and that the discussion is taking place publicly, not just "within the hallowed walls" of the Vatican, he said. But others "are worried" about the tone of the debate and possible conflict within the church.

"But I am a firm believer that the Lord is risen and that his promise that his church will be guided by the Holy Spirit is true," the cardinal said.

What is essential, he said, is that as synod members and others debate the issue, they listen to one another with a conviction that the other loves the church. That, he said, is the only way to bring the "gems" of the other's thoughts and concerns to bear on any eventual decision.

Asked what he sees as the positive contributions of people on both sides, the cardinal said those looking for a more flexible pastoral response are displaying "realism -- life is not perfect" -- and are making suggestions in line with the fact that God's saving action throughout history demonstrates a willingness to meet, reach out to and heal wounded human beings.

On the other hand, he said, he appreciates the position of those who, "knowing the human person," see a danger that many people would interpret pastoral exceptions and "an uncritical openness" as a sign that "anything goes," which is not true in Christianity. "Being a Christian is not a walk in the park. There are some demands."

Tagle said he hopes synod members "don't jump to conclusions" on the issue, but enter the synod process, which Pope Francis had decided will extend through next year with the world Synod of Bishops.

"Let us not rush into simplifying matters into clear formulae or clear directives. That will come," he said. "Let us allow the Holy Spirit to work in us."