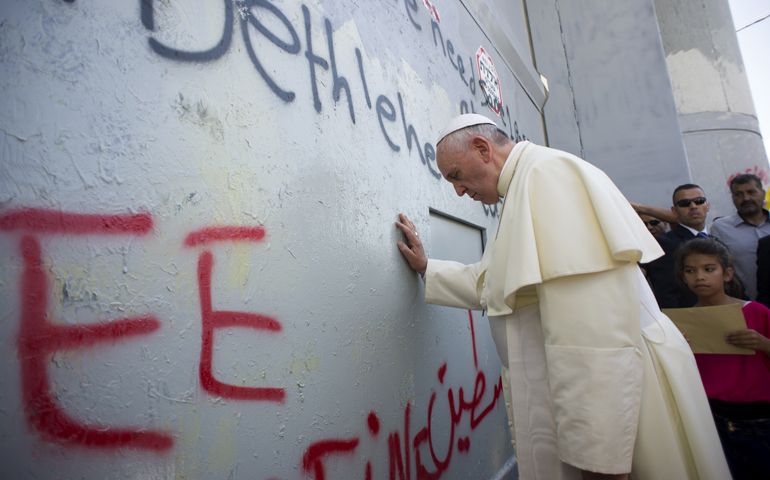 Pope Francis stops in front of the security wall dividing Israel and the Palestinian territories Sunday in Bethlehem, West Bank. (CNS/L'Osservatore Romano, pool)
This article appears in the Francis in the Holy Land feature series. View the full series.

Bethlehem, West Bank — Despite insisting that his three-day trip in the Middle East would be “strictly religious,” Pope Francis dove headfirst into the political situation on Sunday by inviting Israeli and Palestinian leaders to meet June 6 at the Vatican.

“In this, the birthplace of the Prince of Peace, I wish to invite you, President Mahmoud Abbas, together with President Shimon Peres, to join me in heartfelt prayer to God for the gift of peace,” Pope Francis said during his Sunday homily. “I offer my home in the Vatican as a place for this encounter of prayer.

“All of us -- especially those placed at the service of their respective peoples -- have the duty to become instruments and artisans of peace, especially by our prayers,” he continued. “Building peace is difficult, but living without peace is a constant torment.”

Representatives from Israeli president Peres and Palestinian president Abbas were quick to accept the invitation.

“The pope really believes that in meeting together and building up relationships of brotherly dialogue, we might find a way to get out of the hellhole we're in,” said Jesuit Fr. David Neuhaus, the patriarchal vicar of Hebrew-speaking Catholics in Israel who acted as a media representative during the pope's visit.

“What [the pope] is doing is adding is the dimension of prayer,” Neuhaus told NCR. “Most of time, it's political initiatives trying to get interests to coincide. He's saying maybe we should make some space for God to act in this equation. Maybe we can reach a different outcome if we make space for God.”

The pope began his plea for peace almost immediately after landing in Bethlehem, with a stop next to the separation wall. He placed his forehead on the concrete barrier that divides Israel and Palestinian territories and prayed in silence. For Palestinians, the wall is the physical manifestation of occupation that has destroyed the local economy, but Israelis say the wall is essential for their security.

Pope Francis was clear in his demand that Palestine be recognized as a sovereign state but held Palestinians to the same standard to recognize Israel. After he arrived in Bethlehem, Pope Francis met with Abbas and called for "the acknowledgment by all of the right of two states to exist and to live in peace and security within internationally recognized borders."

Continuing his trademark style of accessibility, Pope Francis then drove to Manger Square in an open-sided popemobile rather than a bullet-proof vehicle like his predecessors. Ten thousand people waited through the heat of the day to hear the pontiff celebrate Mass.

“Just seeing people from everywhere in the world, it was a real sign of the church's unity and a desire for the church to be mother to the whole world,” said Eduardo Andino, a theology student at the University of Notre Dame in Indiana who was visiting Israel. He called the experience to see the pope in Bethlehem a “once-in-a-lifetime blessing” and added that he felt the political ramifications of the papal Mass as well. “I respect the aspirations of statehood and freedom as well as spirituality. Both are legitimate concerns,” he said.

Paramedics from the Palestinian Red Crescent Society said because of the heat, at least five people required medical attention due to dehydration, and one was in serious condition.

After Mass, Pope Francis had lunch with five Palestinian families and met with children at the Deheisheh Refugee Camp, where he urged them never to “abandon hope, and always look forward.” “You don’t solve violence with violence,” he told them. “Peace is achieved with hard work and dignity.”

Pope Francis then flew by helicopter to Israel via the Ben Gurion airport near Tel Aviv, where he received an official state welcome, then flew back to Jerusalem. Though Bethlehem and Jerusalem are only a few kilometers apart, the arrival in Tel Aviv was a political statement because the Vatican does not recognize Jerusalem as the capital of Israel.

Upon his arrival in Tel Aviv, Peres praised the pontiff as a “builder of bridges between all religions.”

“Even if peace calls for sacrifices, the sacrifices of peace are preferable to the threat of war,” he said.

Pope Francis, Peres and Prime Minister Benjamin Netanyahu all condemned the terror attack at the Jewish Museum in Brussels on Saturday that killed three people. Peres and Netanyahu noted that the pope's message of interfaith tolerance is the only antidote to this kind of hatred.

“We know that when you go to Yad Vashem and light a candle ... this will show your belief that anti-Semitism is a crime against your belief, and a crime against humanity like the horrific crime that happened yesterday,” Netanyahu said.

But the centerpiece of Pope Francis' visit in the Middle East was Sunday night, as he joined Ecumenical Patriarch of Constantinople Bartholemew I in prayer in front of the tomb of Jesus in the Church of the Holy Sepulchre in Jerusalem. The meeting commemorated 50 years since Pope Paul VI and Patriarch Athenagoras first met in 1964.

Despite keeping to the minute during his busy schedule during the day, the pope was more than an hour late for the discourse after he spent extra time speaking in private with Bartholomew I. Together, one in black and one in white, the two religious leaders knelt before the Stone of Unction, where Jesus' body was laid after he was removed from the cross.

“Religious fanaticism already threatens peace in many regions of the globe where the very gift of life is sacrificed on the altar of religious hate,” Bartholomew I said in his discourse at the Church of the Holy Sepulchre.

Pope Francis also honored the first heroic steps 50 years ago and looked toward the future. “Clearly we cannot deny the divisions which continue to exist among us, the disciples of Jesus. This sacred place makes us even more painfully aware of how tragic they are,” Pope Francis said.

“Fifty years after the embrace of those two venerable Fathers, we realize with gratitude and renewed amazement how it was possible, at the prompting of the Holy Spirit, to take truly significant steps towards unity. We know that much distance still needs to be traveled before we attain that fullness of communion which can also be expressed by sharing the same eucharistic table, something we ardently desire; and yet our disagreements must not frighten us and paralyze our progress,” he said.

Neuhaus of the Hebrew-speaking Catholics said the image of the head of the Orthodox church and the Catholic church praying together in front of Jesus' tomb was the central goal of this journey. “It is an icon for the future attempt to present, once again, brothers who proclaimed the same faith in front of the same tomb,” he told NCR.

“These divisions are scandalous. We need to meet, to talk, to share, to walk together, to recognize how much we have in common, to recognize the respect we have in this are where Christians will either be united or will not survive.”

The day was a whirlwind of meetings and speeches, helicopter flights, red carpets, military salutes, and religious icons. But perhaps the most unique moment came as Pope Francis closed the Mass in Bethlehem just as the muzzein call began from the mosque located near Manger Square. Strains of the chorus singing hallelujah mixed with ebullient cries of “Viva la Papa! Viva Palestine libre!” and the muzzein calling “Allahu Akhbar” as church bells tolled across the city.

After the solemnity of the papal Mass, the crowd exploded into joyful song, clapping and ululating, waving Palestinian and Vatican flags, as the cacophony of religion rang out across the Holy Land.