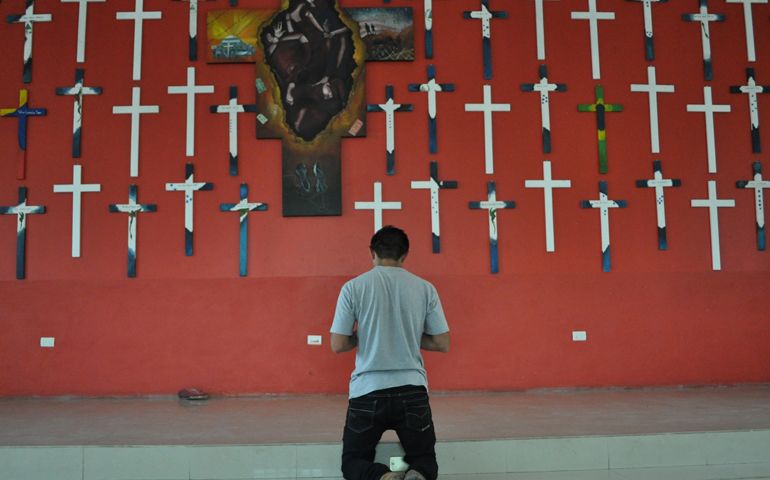 A migrant at La 72 prays in the chapel where crosses on the wall commemorate 72 migrants killed in Tamaulipas in 2010 (J. Malcolm Garcia)

Tenosique, Tabasco, Mexico — A young man, 16 years old, maybe 20, stood with a pistol in the front door of a house in San Pedro Sula, Honduras. The house belonged to Stiveen Sanchez, a single father with two sons and not that much older than the young man confronting him.

The young man belonged to Mara Salvatrucha (MS), an international criminal gang that began in the inner city of Los Angeles in the 1980s and has since spread to Central America. He wanted Sanchez to pay MS $300 a week "protection" to keep his carpenter shop open. Otherwise, he would kill him.

"I said no," Sanchez recalled from La 72, a shelter for migrants. Situated off the main road in the small town of Tenosique in the Mexican state of Tabasco, La 72 — named after the killing of 72 migrants in August 24, 2010, in San Fernando Tamaulipas, Mexico — sees nearly 400 to 1,000 migrants a month, depending on the season, most of whom are fleeing violence in Central America. The shelter is a project of the Franciscan Province San Felipe de Jesús. The order believes in the support of migrants during their passage through Mexico with humanitarian aid, protection and promotion of human rights.

"I didn't earn that kind of money," Sanchez continued. "I decided to leave. I felt good at first when I left. Then I thought about my parents, my house, my job, and I was sad. I am still sad."

Sanchez and his two sons, ages 4 and 9, have been at La 72 since October. Most of the migrants sheltering alongside him also came from Honduras to escape gang violence and seek economic opportunity. For years, Honduras has had the ignominious title of murder capital of the world. Drug running, extortion and political corruption have all contributed to Honduras' lethal reputation.

"I paid gangs for three years," said Freddy Cruz Bolina, 40, from Tegucigalpa, the capital of Honduras. He sat in a chair at La 72 surrounded by toys and diapers for his 12-month-old Dylan. His wife, Marina Elizabeth Hernandez Gonzalez, 36, sat beside him. "Then this guy told me, 'You don't pay more, kill you.' I was paying $400 a week for my restaurant. He wanted $600 a week. We left. My mother is sad. We came here."

When La 72 first opened, the shelter offered a few beds behind a church. Today, it has expanded into a sprawling complex of mural-covered cinder-block buildings. The murals depict Che Guevara, Scripture and the Virgin of Guadalupe with a Zapatista bandanna around her face, among other depictions. In the chapel, 72 white crosses hang from the wall. Each one represents a body found after the 2010 massacre of the 72 migrants. Most of the crosses bear names, a haunting litany of the dead.

Today, La 72 offers shelter to single mothers and families. But young men make up most of the clientele and their flirtatious behavior with some of the single women shows that even under the most difficult situations, testosterone rules. However, these same impulses can create restlessness, frustration and unacceptable behavior such as sexual harassment. To help ward off problems, the shelter clears away tables and chairs on Saturday nights, turning the dining area into a dance floor for anyone who feels the compulsion to writhe to booming electronic music and release pent up energy.

The tensions, and at times lust, liberated through the dancing and laughter alleviate the challenges the migrants live with day to day. Sometimes, there are not enough beds. Pregnant women squabble with women who are not pregnant for priority. Outside the gated compound, law enforcement officers sit in their cars. Although La 72 is recognized as a safe zone for migrants, the presence of the officers reminds them of the dangers the outside world poses. They are just one step away from being arrested. One step away from a trafficker shaking them down. One step away from someone else who might take their life.

Most migrants stay at La 72 for a few days or weeks. Others remain longer, waiting for a verdict on their asylum and work applications, a decision that can take weeks to months. Staff at La 72 submitted 108 applications for humanitarian visas to Mexican authorities last year, said administrator Emilei Viklund. Only 14 were granted.

"You get the feeling that they will take your report but that's where it will end," Viklund said. "They are always very polite. The policy is to keep you happy by going through the process."

If migrants do not receive a visa or work permit and lose their appeals, they have 20 days to leave Mexico, Viklund said. But, she added, the law does not say which border a migrant must leave through. Consequently, many travel north with the hope of entering the U.S. and applying for asylum there.

"I'm running," said Josselyn Portillo, 20, from San Pedro Sula. "I want to live in America. MS killed my cousin. He was a member and wanted to quit the gang. They want to kill the whole family."

Portillo's friend, Paola Regalado, 16, came with her to La 72. MS, she said, had killed both her parents. One of its members attacked her with a machete.

"I still think of my family," Regalado said. "I dream of my parents. They are in the sky and looking down at me."

A map of Mexico painted on a wall near the front gate of La 72 shows routes to the United States and indicates cartel strongholds. It also shows places where migrants can find shelter and food. Other sections indicate less hospitable terrain: a painted pistol indicates spots where migrants have been assaulted. Depictions of money in other locations mean migrants run the risk of cartels demanding fees to let them continue their trek.

Many of the migrants attempt to catch the "el tren da la muerte," the death train that passes through Tenosique not far from La 72. The ominous name refers to Mexican freight trains that travel across the country and are used by migrants to reach the U.S. The train is also called "La Bestia," the beast, and "el tren de los desconocidos," the train of the unknowns. Thousands of migrants use the train despite its dangers. People are injured, or worse, running to leap onto the moving train. Others fall off the rocking freight cars to be maimed or killed under the speeding wheels.

Physical risk aside, the train poses other hazards. It carries not just migrants but predators who would exploit the migrants through robbery, extortion and coercion.

But the dangers posed by the train dissuade only a few. On an afternoon in February, a migrant at La 72 shouted, "El tren! El tren!" and scores of men and women ran down the dirt road from the shelter toward a cluster of buildings that stood before a set of weed-covered, rusty train tracks. After a few moments, the engine's headlight shined down the tracks. With a low moan, the train rolled forward and the migrants shoved and pushed one another for position to jump aboard. They ran alongside the train, scrambling on top of cars, between couplings, grabbing hold of whatever they could. They sat on top of freight cars and tried not to get knocked off by another migrant.

"It's very dangerous," conceded Elias Enamorado, 32, from atop a freight car, "but I'm going to try it."

Enamorado came to La 72 in January to separate himself from the gang violence in San Pedro Sula.

For others, like Stiveen Sanchez, their choice is to wait at La 72 and hope they will be approved for a Mexican humanitarian visa or work permit.

"I came here for help," Sanchez said. "Maybe I'll get it. Maybe no. I have to wait. But waiting is better than living in Honduras."

[J. Malcolm Garcia is a freelance writer and author of The Khaarijee: A Chronicle of Friendship and War in Kabul and What Wars Leave Behind: The Faceless and the Forgotten.]