South African bishops call for inquiry into mine violence 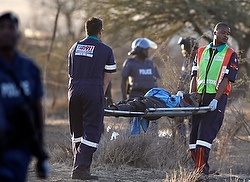 Paramedics carry an injured man after protesting miners were shot outside a South African mine Thursday in Marikana. (CNS/Reuters/Siphiwe Sibeko)

CAPE TOWN, South Africa -- South Africa's bishops condemned the killings at a platinum mine in Marikana and called for a judicial inquiry into the circumstances that led to the violence.

Thirty-four people died and 78 were injured Thursday when police opened fire on striking miners who, armed with machetes and homemade spears, were gathered on a rocky outcrop at the mine, 60 miles northwest of Johannesburg.

Another 10 people, including two policemen, had already been killed in violence at the mine since the start of an illegal strike Aug. 10.

"The senseless loss of life, especially through wanton violence, is always a tragedy and needs to be condemned in the strongest terms," the Southern African Catholic Bishops' Conference said Friday in a statement.

"There are a lot of questions and not many answers," Bishop Kevin Dowling of Rustenburg said Friday in a telephone interview. The mine is located in his diocese.

He and other church leaders were aware of the standoff between two trade unions over recognition agreements at the mine and "hoped that it would be resolved in the negotiations during the week," Dowling said. The miners were also demanding higher wages.

The actions of the trade unions, the London-based Lonmin mining company and the police "need to be investigated" by an inquiry that also looks at "the living and working conditions at this mining operation," the bishops said.

"We offer to assist in the trauma counseling and community healing that will be necessary for this community and the broader South African community," the bishops said.

"We cannot allow this violence to escalate and become a normal part of our society," they said.

"There are effective mechanisms available for facilitating and brokering amicable settlements to disputes of whatever nature, and we encourage all the parties concerned in this tragic situation to commit to acquiring these skills to ensure that similar unfortunate incidences do not occur again," they said.

"Terrible poverty and high levels of unemployment" in his diocese "are the cause of much tension," he said.

The secretary-general of the South African Council of Churches, the Rev. Mautji Pataki, said he and the organization's president, Anglican Bishop Johannes Seoka of Pretoria, found workers and management at the mine "willing to engage one another, provided the level of hostility is reduced to allow peaceful interaction and resolution."

A delegation from the council, of which the Southern African Catholic Bishops' Conference is a member, visited the mine Friday and said in a statement afterward that the council would "seek to help to create an atmosphere conducive to negotiation."

The council called on the police "to exercise restraint in the use of force as they seek to maintain law and order."

It said it is "only through meaningful and peaceful dialogue that all parties affected by this conflict can find a solution."

South African President Jacob Zuma cut short a visit to a regional summit in neighboring Mozambique to visit the mine.

In a front-page editorial Friday, the Sowetan newspaper said in South Africa, 18 years after the end of apartheid, "the value of human life, especially that of the African, continues to be meaningless."

Africans "are pitted against each other over who is the rightful representative of workers. They are also fighting for a bigger slice of the mineral wealth of their own country. In the end the war claims the very poor African -- again," the newspaper said.

South Africa is home to 80 percent of the world's known reserves of platinum. Rising power and labor costs and a steep decline this year platinum prices have left many mines struggling to stay afloat, according to Reuters, the British news agency.

World | South African bishops call for inquiry into mine violence

As Ukraine bleeds, Pope Francis and Russian Patriarch Kirill could be negotiators