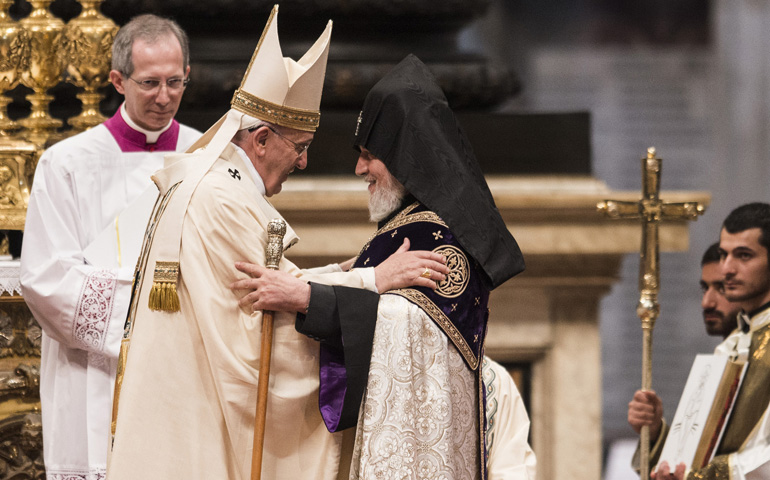 Pope Francis embraces Catholicos Karekin II of Etchmiadzin, patriarch of the Armenian Apostolic Church, during Mass on Sunday in St. Peter's Basilica at the Vatican to mark the 100th anniversary of the Armenian genocide. (CNS/Cristian Gennari)

Commemorating the 100th anniversary of the Armenian genocide, Pope Francis said atrocities from the past have to be recognized -- not hidden or denied -- for true reconciliation and healing to come to the world.

However, Turkey's top government officials criticized the pope's use of the term "genocide" -- citing a 2001 joint statement by St. John Paul II and the head of the Armenian Apostolic Church -- in reference to the deaths of an estimated 1.5 million Armenians during their forced evacuation by Ottoman Turks in 1915-18.

Turkey rejects the accusation of genocide, and the government called its ambassador to the Holy See back to Turkey "for consultations" on Sunday, the same day Pope Francis made his statement. The government also summoned Archbishop Antonio Lucibello, nuncio to Turkey, to lodge a complaint.

Before concelebrating the Mass in St. Peter's Basilica on Divine Mercy Sunday, Pope Francis greeted the many Armenian faithful who were present, including Armenian President Serzh Sargsyan.

The pope lamented the continued forced expulsions and atrocious killings of Christians in the world saying, "Today, too, we are experiencing a kind of genocide created by general and collective indifference" and "complicit silence."

Humanity has lived through "three massive and unprecedented tragedies the past century: the first, which is generally considered 'the first genocide of the 20th century,'" struck the Armenian people, he said, quoting a joint declaration signed in 2001 by St. John Paul and Catholicos Karekin II of Etchmiadzin, patriarch of the Armenian Apostolic Church.

The other two 20th-century tragedies were those "perpetrated by Nazism and Stalinism," while more recently "other mass exterminations" have been seen in Cambodia, Rwanda, Burundi and Bosnia, Francis said.

"It seems that the human family refuses to learn from its mistakes caused by the law of terror, so that there are still today those who try to eliminate their own kind with the help of some and with the complicit silence of others who act as bystanders," he said.

Addressing Armenian Christians, the pope said that recalling "that tragic event, that immense and senseless slaughter, which your forebears cruelly endured," was necessary and "indeed a duty" to honor their memory "because wherever memory does not exist, it means that evil still keeps the wound open."

"Concealing or denying evil is like letting a wound keep bleeding without treating it," he said.

Turkish Prime Minister Ahmet Davutoglu said the pope used "inappropriate" and "one-sided" language by describing the deaths of Armenians during World War I as genocide.

He said, "Only highlighting one side's suffering during wartime and discriminating the others' pain is not appropriate for the pope," adding that it would fuel racism and anti-Turkey sentiments in Europe.

Turkey's Ministry of Foreign Affairs said in a written statement that Pope Francis' references to events from 1915 as genocide "contradict historical and legal facts" and it claimed the Mass was "instrumentalized for political aims."

Turkey says the deaths were due largely to disease and famine during the "relocation process" and that both sides suffered many casualties during the war.

Meanwhile, Armenian Catholic Patriarch Nerses Bedros XIX Tarmouni, who concelebrated the Mass with Pope Francis, said the pope's remarks were not a provocation against Turkey or Muslims, nor was the pope taking sides.

"His vision embraces the world; he expresses the sense of humanity that we all have to share" as caring for one another, he told the Vatican's Fides news agency.

The pope is concerned "about all the oppressed, the poor, the sick of every nation and religion. He has never separated the sufferings of Christians from the sufferings of others, as all of his pronouncements about the conflict bathing the Middle East in blood have shown," the patriarch said.

"Remembering and condemning the horrors of the past can serve as an impediment to those things happening again," he added.

At the end of the Mass, Pope Francis also handed a signed written message to the Armenian Catholic and Orthodox leaders and to Sargsyan asking that "the path of reconciliation between the Armenian and Turkish people" be taken up again. It also prayed that peace would come to the Nagorno-Karabakh enclave in Azerbaijan where tensions have been high since ethnic Armenian residents proclaimed their independence from Azerbaijan after a conflict in the early 1990s.

"Despite conflicts and tensions," Pope Francis wrote, the people of Armenia, Turkey and Nagorno-Karabakh "have lived long periods of peaceful coexistence and, even in the whirlwind of violence, they have experienced instances of solidarity and mutual help."

Living in this spirit of harmony is the only way sacrifice will "become the seeds of justice and peace" and younger generations will have a better future, the pope wrote.

"May this sorrowful anniversary become for everyone an occasion for humble and sincere reflection, and for every heart to be open to forgiveness, which is the source of peace and renewed hope," the pope's message said.

A version of this story appeared in the April 24-May 7, 2015 print issue under the headline: Term 'genocide' angers Turkey, while pope says memory leads to healing.