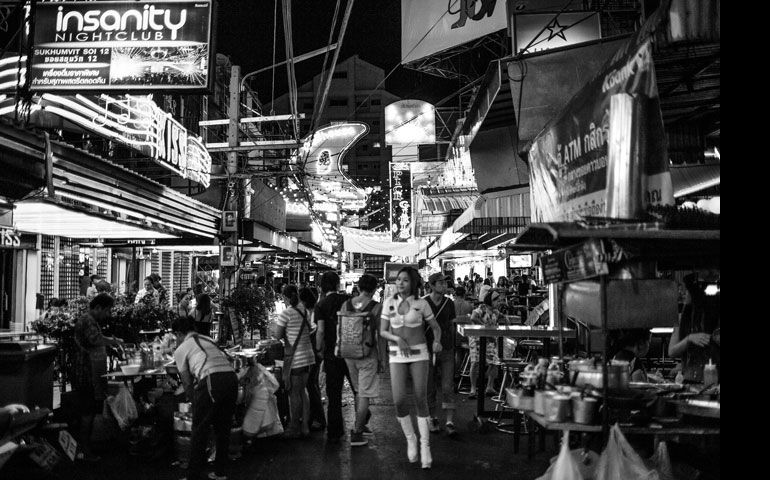 Bangkok — A small, delicate silver cross hangs around Mint's neck, a charm she reaches for nervously from time to time as she speaks.

Mint is her nickname, an Anglicized version of the long Thai name she was given and would rather not make public. As a former prostitute, the 24-year-old is concerned about bringing shame to her family, though she says everyone in her village in the northeastern province of Issan -- a poor agricultural region along the border with Cambodia and Laos -- would assume, or simply know, she had to be doing sex work to send money back home.

Everyone in Bangkok knows how it works. Many of the countless massage parlors, go-go bars and karaoke joints peppered throughout the city are frequently thinly veiled fronts for prostitution. Heavily made-up girls hang around in the periphery of joints catering to Western tourists. Most of the Asian customers, including Thai men, head to brothels and bars elsewhere, away from the sex tourism districts.

Sex work is such big business in Thailand that the International Labor Organization estimates, conservatively, that it generates 7 percent of the country's gross domestic product. An ILO report from the late 1990s says sex workers sent home $300 million a year to rural areas, "more than any government development project."

Not all sex work is done willingly, and some would argue that prostitution is by its very nature exploitative, as well as a driving factor for human trafficking -- the sale, transport and profit from human beings who are forced to work for others, often referred to as the modern equivalent of slavery.

Thailand is struggling to curb trafficking amid international pressure, and dozens of American groups, many of them evangelical, have entered the country in recent years to fight the issue, with the blessing of U.S. foreign policy.

Yet Mint resists the conflation of sex work with trafficking. She now has a steady job with NightLight International, the anti-trafficking organization that got her off the streets.

"I wasn't tricked into this -- not into prostitution, nor into a Christian life," Mint says. "I entered sex work by choice, but that doesn't mean it was an easy choice."

The motto for NightLight International is on its website: "The people walking in darkness have seen a great light; on those living in the land of the shadow of death a light has dawned" (Isaiah 9:2).

And the oppressed, as far as Nightlight founder Annie Dieselberg is concerned, are women exploited by the sex industry, along with children, or at high risk for such exploitation, she says.

Dieselberg founded NightLight in 2005 after almost a decade of missionary work in Thailand with her husband, a pastor who had been assigned to an evangelical church in Bangkok. What Dieselberg enjoys doing most, she says, is rescuing women. She roams the streets at night, searching for those who may need a way out of prostitution -- the "survivors," as she calls them.

Mint came by way of a friend of Dieselberg's. A fellow evangelical found her working a corner many nights and referred her to NightLight. Some women arrive there after one-on-one conversations on the streets; other organizations, including the police, fight sex trafficking by storming brothels in search of underage sex workers.

NightLight employs 50 women, paying them around $250 a month to make crafts and jewelry. The salaries are above Thailand's minimum wage, and the organization provides medical insurance and a savings plan, as well as a small child care center.

Most of the women at NightLight's four-story building, just blocks from Bangkok's infamous Nana Plaza sex district, are younger than 30, and come from Thailand, Burma and Laos.

Mint comes here to work on a part-time basis assembling jewelry. She has found a community here, a sense of belonging she didn't have before.

"Now I can do good work that will not hurt my body," she says. "I don't have to fight all the time."

This goal of individual human dignity is what drives so many U.S. evangelicals to fight sex trafficking, says Brie Loskota, managing director of the Center for Religion and Civic Culture at the University of Southern California in Los Angeles.

"It is a moving idea, for just about anyone, but particularly in the evangelical world," she explained. "The fact that they come together in a way that is non-shaming for the victims, is a remarkable testament for how evangelicals are being smart in this movement."

More than a decade ago, the U.S. Victims of Trafficking and Violence Protection Act established a set of legal tools to combat trafficking nationwide and around the world.

To help Thailand, the U.S. government awarded almost $12 million in funding to nongovernmental organizations in East Asia that run anti-trafficking programs in 2010; about one-sixth of that went to faith-based organizations.

"We work closely with many of them, and they give us tips on who the trafficking victims are and where they might be," said Saowanee Khomepatr, director of Thailand's Bureau of Anti-trafficking in Women and Children, part of the Ministry of Social Development.

But this summer, the latest U.S. State Department's "Trafficking in Persons Report" found the Thai government was not fully complying with the minimum standards for the elimination of trafficking.

But not everyone agrees that sex trafficking is the highest priority. Some critics argue that in an effort to fight trafficking, the U.S. is clamping down on prostitution worldwide while overlooking other kinds of human trafficking.

"There are other places to focus on, like children, or people who are exploited in the factories who cannot leave, or the fishing boats," said criminologist Sam Derbali, a Belgian researcher at Mahidol University in Bangkok. "There are thousands of fishing boats in Thailand, and nobody knows what happens there."

According to the International Labor Organization, an estimated 75 percent of people trafficked around the world at any point in time do not end up as sex workers, but in fishing, farming, domestic work or construction industries.

Rescuing sex workers, it turns out, is difficult and often unsuccessful. One alternative can be found in the northern city of Chiang Mai.

The Can Do bar, located on Chiang Mai's sex district strip, looks like an old punk rock joint: It isn't very clean, and the walls are covered with graffiti.

But workers here are paid at or above the Thai minimum wage, and receive training on a range of skills, from how to practice safe sex, to tips on how to manage difficult or violent situations that may arise.

Mai, a 28-year-old woman from Burma, is a sex worker affiliated with Can Do. Without makeup, and dressed in a simple black T-shirt and jeans, she looks nothing like the young women roaming Bangkok's sex tourism districts. Before landing here, she had worked as a maid, dishwasher, baker, farmer and street food vendor. And, she claims, she is in sex work for the long haul.

"Each job has its good points and its bad points, but when I came to do sex work, I realized this is a job that gives me enough income to really look after my family," says Mai.

She insists no one forced her to do this: "My friends were the ones that told me about the money to be made in sex work."

One of those friends, Mai says, was picked up in a police raid at a Chiang Mai brothel a couple of years ago. She has since gone right back into prostitution.

But while the Can Do bar tries to treat sex workers fairly and gives them part ownership of the business, NightLight's Dieselberg is convinced most women would rather quit prostitution if they are offered a decent-paying alternative.

"We usually have a waiting list of women wanting to come work at NightLight," Dieselberg says. And that tells her women aren't so eager to sell their bodies on the streets.

According to NightLight, 160 Thai women and 45 women from other countries have come through the organization since its founding in 2005. There's no way to know if any of these women have gone back to prostitution.

"We could do much more but the financial and human resources needed are so high and we are limited in how much we can help," Dieselberg said.

Mint, for one, is grateful for NightLight's help and has no desire to go back on the streets.

"There may be some women out there who say they feel fulfilled when they find a foreign boyfriend or a man who gives them money for sex," says Mint. "But we don't really know their full story, like what they had to endure, what they've been through."

For two years, she has been making jewelry and crafts at NightLight and during that time, she says, she has developed new skills that will keep her from having to earn a living as a prostitute.

Someday, when she has enough savings and business know-how, she plans on starting her own crafts store in Bangkok.

World | In Thailand, US evangelicals work to end prostitution