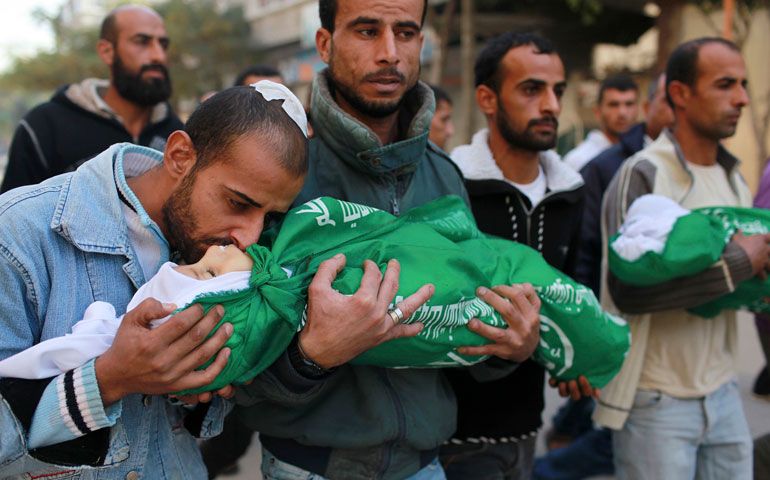 A Palestinian man kisses the body of one of his children during a funeral in the northern Gaza Strip Nov. 18. An Israeli missile ripped through a two-story home in a residential area of Gaza City, killing at least 11 civilians. (CNS/Reuters/Mohammed Salem)

The Obama administration's reaction to last month's Israeli onslaught on the Gaza Strip is emblematic of the contradictions in its foreign policy seen throughout its first term.

On the one hand, pushed by both Republicans and Democrats in Congress, the administration was virtually alone in the international community defending the bombing and shelling of the crowded civilian enclave, and single-handedly blocking a modest and balanced initiative in the U.N. Security Council calling for a cease-fire.

On the other hand, the administration was largely responsible for stopping the Israeli assault after little more than a week prior to a planned ground invasion and over the objections of most of Israeli Prime Minister Benjamin Netanyahu's hard-line cabinet.

At the United Nations, U.S. Ambassador Susan Rice correctly noted that there was "no justification for the violence that Hamas and other terrorist organizations are employing against the people of Israel." However, she had absolutely no criticism of Israel's far more devastating attacks against the people of the Gaza Strip, simply saying, "Israel, like any nation, has the right to defend itself against such vicious attacks."

The real issue, however, was never Israel's right to self-defense, but its attacks on crowded residential neighborhoods, which killed more than 100 civilians, nearly a third of them children (as compared with five Israeli civilians killed by Hamas rockets). The Obama administration's position is ironic given that, while both sides share the blame for the tragedy, it appears that it was Israel that was primarily responsible for breaking the fragile cease-fires, leading to the latest round of heavy fighting, through acts such as its assassination of a leading Hamas official and cross-border attacks that killed a number of boys playing soccer.

On Nov. 20, Rice blocked an otherwise unanimous U.N. Security Council statement calling for a cease-fire, condemning all acts of terrorism and violence directed toward civilians, and reiterating support for all states to live in peace and security within their internationally recognized boundaries. It reiterated that the Israeli-Palestinian conflict could only be resolved through peaceful means and called for an immediate resumption of a substantive bilateral negotiating process between Israel and the Palestinian Authority.

This evenhandedness was too much for the Obama administration, however, which promised to prevent the passage of any statement or resolution that didn't explicitly put the blame for the violence solely on Hamas.

It is hard to imagine anything the administration could have done that would have more greatly alienated public opinion in the Arab world than block international efforts to end the killings, particularly at a time when public opinion matters more than ever in that part of the world and as once-close U.S. allies in the region like Egypt, Turkey and Tunisia are taking increasingly independent foreign policy positions.

In the face of growing calls from throughout the world for both sides to de-escalate the violence, the White House said on the third day of fighting that it would leave it to Israel to decide whether it was appropriate to launch a ground invasion. Similarly, in response to the outcry at the growing number of civilian casualties from the Israeli, President Barack Obama's deputy national security adviser, Ben Rhodes, insisted, "The Israelis are going to make decisions about their own military tactics and operations."

While, much to the chagrin of Israeli peace activists and others, the administration was largely repeating Israeli talking points, Obama was acting very differently behind the scenes. Netanyahu is facing a tough re-election fight, leading many Israeli peace activists to charge that this latest round of fighting was politically motivated. As a result, there may have been concern that public criticism of Netanyahu or supporting U.N. efforts for a cease-fire would have played into his hands, provoking a nationalist reaction. Instead, Obama dispatched Secretary of State Hillary Clinton to Israel to pressure the right-wing government not to launch a ground invasion of the Gaza Strip with the largest call-up of Israeli reserves in three decades. Despite having been one of most strident defenders of Israel's right-wing government when she was senator, Clinton successfully pressed Netanyahu to accept the Egyptian cease-fire proposal, which he had initially rejected.

While many Israelis and Palestinians are understandably relieved and grateful for Washington's intervention, it raises some disturbing questions. Though the Obama administration deserves credit for preventing greater carnage, why did it apparently give the Israelis the green light during the first bloody week of fighting? Is the insistence on sidelining the United Nations in favor of a Washington-led initiative yet another sign of the administration's preference for U.S. unilateralism over working through the U.N. system, and for Pax Americana over real peace? Why has the Obama administration increased military aid to Israel to record levels despite Israel's propensity to use U.S. weapons against heavily populated civilian neighborhoods and despite repeated calls by Amnesty International and other human rights groups for an arms moratorium on both sides?

The United States has stridently opposed nonviolent initiatives by moderate Palestinians and their supporters -- such as U.N. recognition of Palestinian statehood; boycott, divestment and sanctions campaigns against the occupation; humanitarian aid flotillas; and allowing the International Court of Justice and the U.N. Human Rights Council to address ongoing Israeli violations of international humanitarian law. Given that, is it any surprise that Hamas and other extremists in the Gaza Strip would resort to violence?

[Stephen Zunes is a professor of politics and chair of Middle Eastern studies at the University of San Francisco.]

Perspective | US policy on Gaza crisis rife with contradiction