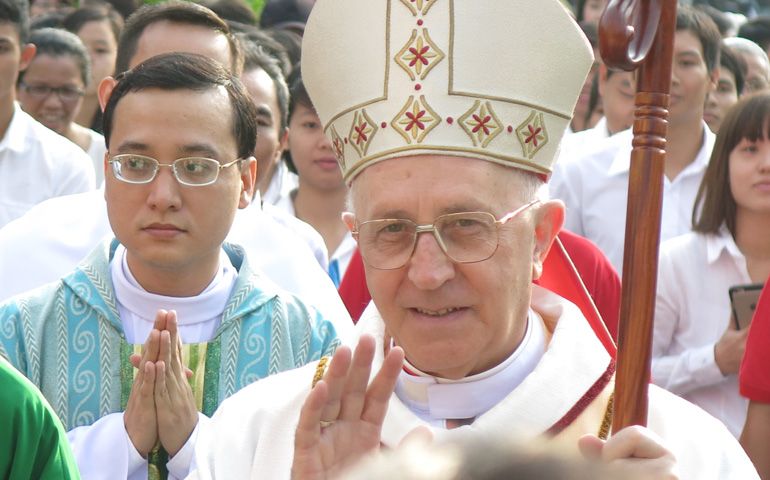 Ho Chi Minh City, Vietnam — In his first pastoral visit to Vietnam, Italian Cardinal Fernando Filoni, prefect of the Congregation for the Evangelization of Peoples, encouraged Catholics to spread the faith in a period when Vatican-Vietnam relations are growing warmer.

Filoni, who coordinates the church's missionary work, visited Vietnam Jan. 20-26 after accompanying Pope Francis to Sri Lanka and the Philippines earlier in the month. His weeklong visit included stops in Hanoi, Hue, and Ho Chi Minh City as well as one at the celebrated La Vang Marian Shrine, where the Virgin Mary is said to have appeared in 1798.

Filoni reminded some 500 priests from dioceses in northern Vietnam that only 7 percent of Vietnam's population know the Christian God.

"There are many people who have not known him," Filoni said. "So how will we evangelize? If we are satisfied with the current number of Catholics, we do only administration? So please go out and do not go to other churches, but find remote areas where people have yet to know God."

The Hanoi government continues to place restrictions on religion in Vietnam. Catechetical work is mostly limited to church properties. Catholic schools and hospitals are outlawed.

However, Filoni's visit comes at a time of improved relations between the Holy See and Vietnam. As an indicator of these warming relations, Francis will make a cardinal of Hanoi Archbishop Pierre Nguyen Van Nhon on Feb. 14. Nguyen's appointment is the second-most-important move Francis has made: In September 2013, he appointed Bishop Paul Bui Van Doc as coadjutor archbishop of Ho Chi Minh City.

Diplomatic relations between Vietnam and the Vatican were fully dissolved in 1975, when the communist north overran the south.

Fr. Joseph Nguyen Trung Thoai, pastor of the church built last year in northern Vietnam, said the government has allowed him to provide some pastoral services to local Catholics since 2002. He serves 3,500 Catholics and annually baptizes an estimated 500 people.

Government authorities have not yet allowed any religious activities in three northern provinces of Dien Bien, Lai Chau, and Son La. Lacking churches, local Catholics gather in their houses to pray.

Filoni also mingled with thousands of Catholics at the La Vang Marian Shrine in central Vietnam. "I come here as the person in charge of evangelization. I put the world's evangelization in Mother Mary's hands," he said.

During his trip, Filoni baptized and confirmed 220 adults. He visited tombs of foreign missionaries in Hoi An, in central Vietnam, where the first foreign Jesuit missionaries arrived in 1615.

"I am happy that the evangelization work has been carried out in Vietnam for 400 years and is developing well," Filoni said.

Filoni is the third prefect of the Congregation for Evangelization of Peoples to visit Vietnam. His predecessors Cardinals Crescenzio Sepe and Ivan Dias paid pastoral visits in 2005 and 2010.

Doc, president of the Vietnamese bishops' conference, said he invited Filoni to visit Vietnam to encourage Catholics to bear witness to Jesus and bring the good news to other people. The church has approximately 5,000 priests and nearly 20,000 religious serving 6.6 million Catholics among the population of 91 million.

Filoni also met Vietnam Prime Minister Nguyen Tan Dung and other government officials on Jan. 20 in Hanoi. The national Vietnam Television Station aired their meeting and quoted Dung as saying that the relations between Vietnam and Vatican remain strong "despite ups and downs," with good prospects ahead.

Dung, who met Francis in Rome in October, cited improved relations as the Vatican and Vietnam have continued regular meetings. Dung suggested both sides should continue "frank dialogue on the basis of sincerity, mutual understanding, trust and respect for differences."

The prime minister said Van Nhon's appointment as cardinal is a sign the Vatican appreciates and respects Vietnam.

The path to holiness isn't for the lazy, pope tells altar servers