In Venezuela, shortages include bread for Communion, sacramental wine 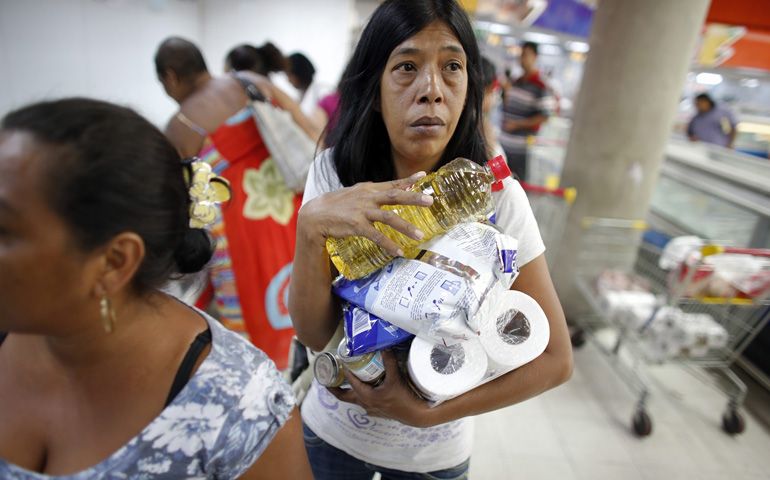 A woman carries products at a state-run supermarket Tuesday in Caracas, Venezuela. Sporadic shortages of basic goods in the country can turn a roll of toilet paper into a rare commodity. (CNS/Reuters/Jorge Silva)

Santo Domingo, Dominican Republic — In his small parish outside of Venezuela's capital, Caracas, Fr. Maximo Mateos is filling his chalice with less than half the amount of wine he formerly used.

The priests at Our Lady of the Rosary Parish in Caracas are precariously close to running out of sacramental wine.

And for the Sisters of the Adoration, finding good wheat flour to make Communion wafers is becoming harder and more expensive.

In Venezuela, sporadic shortages of basic goods can turn a roll of toilet paper into a rare commodity; add bread and wine to the list of scarce products.

Catholic leaders in the South American country have advised priests to conserve what supplies they have as they search for an alternative supply to ease the shortage.

In the publication La Iglesia Ahora, three bishops said there is an "extreme need" for supplies of wine. The supplier, Bodegas Pomar, "can't guarantee consistent production and regular distribution due to the lack of some goods needed to bottle the product."

Phone messages left for Bodegas Pomar were not returned, but church officials said less than three months of wine remained in storage.

"We've had to do what we can to conserve while hoping that it's just a temporary shortage," Mateos told Catholic News Service. "We do live in a country where shortages of all things are common. So this is not uncommon."

Supplies of everything from toilet paper to milk, sugar and oil sporadically disappear from store shelves.

In late May, authorities seized 2,500 rolls of toilet paper, 7,000 liters of juice and 400 diapers from a clandestine warehouse in Caracas -- proof, the government said, of hoarding that is to blame for the shortages.

The Venezuelan government announced in early June that it would start testing a program designed to prevent hoarding. The program will digitally track shoppers in the state of Zulia, which includes the country's second-largest city, Maracaibo, and will limit the amount of basic goods they can buy in one day. The pilot program will be put in place in 65 supermarkets, officials said.

The government of oil-rich Venezuela has kept in place price and currency controls introduced under the government of President Hugo Chavez, who died in March after a prolonged battle with cancer. Those restrictions have limited the availability of products to consumers.

"They have kept the prices down with controls, and that has kept inflation relatively low, but it can't last," said economist Robert Bottome, who runs a consultancy in Caracas. "Things are going to get worse."

Chavez's successor, Nicolas Maduro, has tried to ease some of the pressures by making the dollar more available to some businesses, thereby allowing them to import more goods, but shortages have persisted.

In Caracas, a member of the Sisters of the Adoration, who produce wafers for Communion, said they have started buying flour in local bakeries and pastry shops because finding pure wheat flour has become more difficult.

That has raised prices, limiting the number of wafers they turn out. The congregation has cut production by two-thirds in recent years.

Fr. Honegger Molina of La Boyera parish told local reporters that he used to receive 10,000 wafers at a time from the congregation, but now "they tell me to take 2,000 and come back in 15 days for 2,000 more."

The situation is more difficult when it comes to sacramental wine, which has to be pure and without additives, making finding alternatives difficult.

Jose Antonio Conceicao, who works in the liturgy department at the Venezuelan bishops' conference, said the number of Masses will not be reduced due to the shortage. Catholic leaders, he said, believe the shortage will only be temporary as they are working to find another supply.

Catholic leaders said they are talking with suppliers in neighboring Colombia, but that no supply has yet been located.

Meanwhile, parishes are saving what they can.

"We're asking other parishes for help, but it's something we're all going through," said a representative for Our Lady of the Rosary Parish. "We just hope what little we have will last until they find a solution."

Fr. Pablo Urquiaga, a priest at Resurrection of the Lord Parish in Caracas, said the temporary shortage can serve as a reminder of what's important.

World | In Venezuela, shortages include bread for Communion, sacramental wine

US bishops, Vatican lead the charge for nuclear disarmament

The right thing: The moral response to refugees is clear