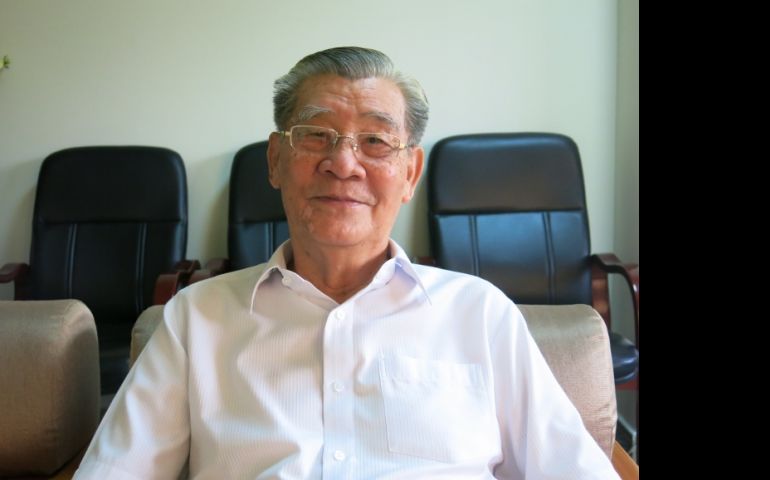 Cardinal John Baptist Pham Minh Man presided at a special ceremony Saturday to inaugurate a new building in the St. Joseph Major Seminary compound. Present were Singapore-based Italian Archbishop Leopoldo Girelli, the Vatican non-resident representative to Vietnam, 23 archbishops and bishops from throughout the nation, some 200 priests and hundreds of Catholics who helped cover the cost of the construction.

During the ceremony, local Catholics also marked the 80th anniversary of Cardinal Man’s birthday by giving him gifts and praising his efforts over the past 16 years to build the local church.

Cardinal Man’s “main motivation for serving the church is to obey God’s will and follow Jesus’ example,” Coadjutor Archbishop Paul Bui Van Doc, Man’s successor, said. The cardinal also deals with all things in harmony with the love of God and human beings, he added.

Archbishop Doc, president of the Catholic Bishops’ Conference of Vietnam, said Vietnam’s only living cardinal is endlessly kind, sympathetic and grateful to all people, and that he treats people with a friendly manner.

Auxiliary Bishop Peter Nguyen Van Kham said the cardinal, who used to catch fish and sell food on streets for a living when he was a child, “makes efforts to promote reconciliation among local Catholics.”

Before this event, Cardinal Man told NCR a week ago that when he started to serve the archdiocese in 1998, he was deeply concerned about divisions between priests who had joined the National Assembly or other state organizations and the rest who were in favor of church teachings.

The cardinal, who only recently uses a stick to walk, said his predecessor Archbishop Paul Nguyen Van Binh (1910-1995) had allowed some priests to join the National Assembly. Archbishop Binh, the archdiocese’s first prelate who led the archdiocese during and after the Vietnam War, asked local Catholics to live in harmony with the communists and to work with others to rebuild the city. He also held dialogue sessions with the communists to help both sides understand one another better.

Cardinal Man said Archbishop Binh asked a priest who was a National Assembly member and had fathered a child to remain his priesthood after the priest had petitioned to give it up.

“I could not exclude those priests who joined the National Assembly from the priest college, as I highly respect what he (Archbishop Binh) did for the local church,” Cardinal Man said.

“I also do not stand for any side. I follow God, who teaches me to love all people,” he said.

He said he respects local priests’ freedom and tries to promote brotherly solidarity among them and to bring them closer together. His policies differ from his predecessor’s in some ways, however.

Cardinal Man said many bishops approved of his way of dealing with the case.

No priests have joined the National Assembly.

The prelate said during his term in office he sent many priests to study various subjects abroad and they now were serving the local church. Many of them also serve as secretaries general in 16 out of the 17 national Episcopal Commissions.

Regarding former church properties confiscated by the government after 1975, he said he does not ask the government to return them but asks it to work with the local church for the common good.

“If we ask authorities to return church properties, they would feel they are not respected and so would not return them,” he explained.

It is said that the Ho Chi Minh Archdiocese has been given back more former church properties than other dioceses in the nation.

In addition, Cardinal Man is responsible for successful conversations and negotiations with both the city central governments. He has won the respect of the local authorities by being honest and transparent with them. One example is the way he talked with them about Catholic services. Also, the many "quiet" clinics and centers for HIV/AIDS patients that the church sponsors are open to all Vietnamese, not only Catholics. The local government now accepts that and is grateful for this service.

In short, the church has done good things for the city and the city has responded in kind.

Also on March 22, the Holy See announced that Pope Francis accepted the resignation of Cardinal Man due to his age. He was succeeded by Coadjutor Archbishop Paul Bui Van Doc, 70, who was former bishop of the neighboring My Tho Diocese.

Born on March 5, 1934, in the southernmost Ca Mau province, Cardinal Man entered St. Joseph Major Seminary in Saigon, now Ho Chi Minh City. He was ordained a priest in 1965 and studied at Loyola University in Los Angeles from 1968 to 1971. He taught at seminaries in southern Can Tho City until he was ordained coadjutor bishop of My Tho diocese in 1993. He was appointed as archbishop of Ho Chi Minh City archdiocese in 1998 and made a cardinal five years later. Cardinal Man attended two conclaves – on in 2005 to elect Emeritus Pope Benedict XVI and in 2013 to elect Pope Francis.

[Joachim Pham is an NCR correspondent for Southeast Asia based in Vietnam.]