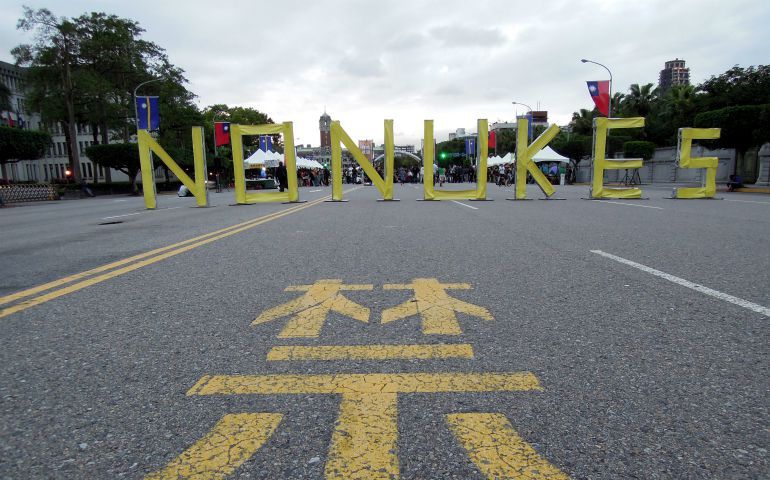 A sign with the words "no nukes" is seen in front of the Presidential Office Building during an anti-nuclear protest March 3 in Taipei, Taiwan. (CNS photo/Henry Lin, EPA)

For the first time in history, a treaty to ban nuclear weapons is on the negotiating table at the United Nations. A solid majority of governments is set to close a gaping hole in international law. The new treaty may well be ready by July 7, but the United States and four other governments that bear the greatest responsibility for international peace and security are absent.

Instead of meeting their United Nations Charter obligations, instead of negotiating nuclear disarmament in good faith as required by the Nuclear Non-Proliferation Treaty, instead of outlawing the ultimate instrument of indiscriminate violence in an era of indiscriminate violence, the five permanent members of the U.N. Security Council are boycotting the deliberations and even belittling their purpose. The U.S. has constrained its allies to stay away as well, including nations like Germany and Japan.

That all countries have a stake in eliminating nuclear weapons is obvious. These weapons threaten all life and all that is most precious in life. Thankfully, the simple truth about nuclear weapons is back in play around the world due to a five-year humanitarian initiative that mobilized governments, regions, international organizations, a civil society campaign and world religions. The onus now is on what nuclear weapons do to us and to our planet, and what we must do about them.

The historic shift powering the current negotiations is that states without nuclear weapons are taking leadership to achieve a global public good on the basis of international humanitarian, human rights and environmental law. This same majoritarian gene may well save the Paris climate accord as citizens, cities and corporations step in to fulfill obligations others have abandoned.

How can we understand the nuclear powers' dereliction of their duty? One clue is behavioral. The evidence indicates that having nuclear weapons makes a government allergic to giving them up. States with nuclear weapons are even allergic to the prospect of other states uniting to make nuclear arms illegal.

The symptoms of this allergy are clear. As some 130 states put the finishing touches on a treaty on the prohibition of nuclear weapons, the United States and the other nuclear powers appear incapable of engaging on the merits of the case that nuclear weapons are inherently unacceptable. Yet the merits are precisely what is motivating the non-nuclear majority to take responsibility where the nuclear minority has failed.

The permanent members of the Security Council still cling — in 2017 — to Cold War plans that require an unshakeable commitment to "mutually assured" nuclear destruction and to a nuclear "balance of terror."

A look into the past offers further evidence, including decades of lofty disarmament promises perennially unmet. A look to the future shows more of the same, including elaborate plans for extensive modernization programs at astronomical cost that will allow for the indefinite retention of all nuclear arsenals.

Nuclear powers would like others to acquiesce in their assertion that the capacity to wreak indiscriminate mass destruction is an inescapable necessity for them, but is somehow not acceptable for other states. In fact, there are no "right" hands for the "wrong" weapon, as they have often been told. Even extreme might does not make nuclear weapons in any way "right."

Meanwhile, nuclear insiders who have come out against the weapons shed light on what's really at stake. Retired general Lee Butler, former head of the U.S. Strategic Command, suggests that we cannot take much credit for our own survival. Nuclear apocalypse has only been avoided, he says, by a combination of skill, luck and divine intervention.

It is reasonably clear in human affairs that the prohibition of something bad is an essential step towards its elimination. Some of the same governments unwilling to ban nuclear weapons validate that very logic when they call for compliance with the conventions against chemical and biological weapons of mass destruction. Most have also reduced their use of landmines and cluster munitions — respecting these prohibitions and their steady progress towards elimination.

Our 21st century needs cooperation and partnership on a global scale in order to tackle climate change, sustainable development, poverty and mass migration. Yet trillions of dollars are being wasted on nuclear arsenals which breed fear, bad blood and deadlock instead.

The nuclear-armed states must find the courage to relinquish nuclear weapons of mass destruction and strengthen the international rule of law commensurate with their primary responsibilities in the U.N.

The world community is taking an essential step towards a future free of nuclear weapons. Those governments that chose to be absent are casting votes for the dangerous and irresponsible past.

What would Jesus wear to celebrate Mass at the end of the world?

Nuclear nations meet at UN amid growing support for disarmament