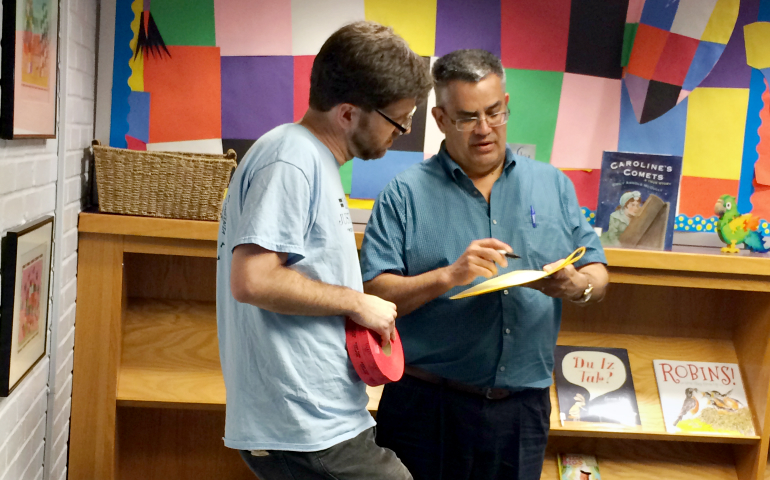 As the new presidential administration enforces tougher immigration laws, nonprofit groups are responding by educating those affected about their rights and helping them pursue a legal path — if one exists — to stay in the country. On April 29, several dozen immigrants gathered at a Spanish immersion elementary school in South Arlington to receive free advice from immigration attorneys about their options.

Catholic Charities of the Diocese of Arlington, the Virginia-based Legal Aid Justice Center, and Ayuda, which provides legal, social and language-access services to immigrants in the Washington, D.C., region, sponsored the immigration consultation clinic. Friends of Don Beyer — supporters of the re-election campaign of U.S. Rep. Don Beyer (D-Virginia) — responded to a plea from the congressman and donated about $2,500 to help defray the costs of the event, held in his district, parts of which are heavily Hispanic.

The Washington Post reported that deportation arrests for January through mid-March had gone up 32 percent over the same period last year, and that half of those arrested in Immigration and Customs Enforcement raids had either no criminal record or traffic convictions. The Post noted that the Obama administration had also deported thousands of immigrants living in the U.S. illegally, only prioritizing the arrests of criminals in 2014.

The clinic was held in the elementary school's library. About a half dozen lawyers from the sponsoring nonprofits, as well as a few immigration attorneys who volunteered their time, met privately with families at round tables among the stacks of books. Most of the lawyers were fluent in Spanish, although volunteer translators were also present.

Stacy Jones, a supervising attorney with Catholic Charities' Hogar Immigrant Services program, said the weekend clinics are proving popular with people who, because of work or child care problems, can't get to an agency office during the week. She noted that Hogar Immigrant Services saw more than 2,500 individuals last year, screening them for immigration relief, taking some on, and referring some to other agencies or private attorneys.

"The best-case scenario is you're eligible for some kind of relief," said Jones of the clients they were expecting that afternoon. "The worst case, you're not eligible, but you know that now and you know your rights." Due to client confidentiality, none of the attorneys present were at liberty to discuss any of the cases.

Those who came that day were asked to bring their immigration documents, passports, police reports for those who had been victims of crime or accused of committing a crime, and any criminal court documents. Victims of certain crimes who assist the police might be eligible for U visas, although The New York Times reported on April 30 that reports of crime, particularly domestic abuse, have gone down among those here illegally for fear of being detained and deported.

Simon Sandoval-Moshenberg, director of the Immigration Advocacy Program at Legal Aid Justice Center, passed out numbers from a roll of red carnival tickets to the families waiting in the hallway.

He's been at the Legal Aid Justice Center for six years, but the program only recently started doing these clinics.

"This is specifically a response to the new administration and new enforcement priorities, or rather lack of priorities," said Sandoval-Moshenberg. "A lot of people who have been undocumented all along had a general understanding that if they kept their heads down and stayed out of trouble, they'd be OK."

That's no longer the case, he said, as ICE under President Donald Trump has reinstituted "collateral arrests," a practice that was in effect under President George W. Bush but not under President Barack Obama. Agents who knock on a door looking for one person might now sweep up everybody there — even if the person they were originally looking for isn't present, said Sandoval-Moshenberg.

"The situation is objectively much worse now for those who've been here many years and have not committed a crime," he said, noting that ICE arrests have gone up about 66 percent.

This leaves immigration lawyers like Sandoval-Moshenberg threading the needle of explaining the relief that might be available to one in 10 of the people they talk to, he estimated, and making sure the rest understand they are not eligible so that they aren't later victims of scam artists offering to help.

The clinic was the third level of what he called an "inverted pyramid" response on the part of the agencies. The first level is the "know your rights" trainings that the groups have been sponsoring. Those public forums offer people an opportunity to ask general questions about current law but don't allow for one-on-one consultations with attorneys.

The second level is power-of-attorney workshops, at which volunteers help immigrants fill out legal documents concerning the care of their children should parents be taken in custody. The final level of assistance is direct representation in the courts.

"What we've found following the election is that even people here who are citizens or have green cards or with DACA status are all afraid, they're all terrified that they'll be swept up" in immigration enforcement, said Beyer. His district is one of the wealthiest and best-educated in the country, he said, and one in which 37 percent of families speak a language other than English at home.

He commended the organizations for "doing the Lord's work with these families, who are terrified. What can we do? The answer is more funds to do these clinics."

A 2012 promotional video for the Hogar Immigrant Services program of Catholic Charities of the Diocese of Arlington, Virginia

The government of the District of Columbia recently set aside $500,000 to assist nonprofits that do immigration work, said Sandoval-Moshenberg, while Arlington County budgeted $100,000 for fiscal year 2018 for the same, but how that money will be distributed is not clear.

"This is the process," said Terry Bravo, motioning toward the lawyers and clients huddled around the library tables. A Puerto Rico native who lives in Fairfax, Virginia, Bravo has volunteered as a translator at Catholic Charities events before, helping people fill out green card applications. "It's basically my way of doing something concrete for Jesus, for others who need help. I really see the face of Christ in these people."

Frank Nieves, an immigration lawyer who previously practiced criminal defense law — "this is much more rewarding," he said — was also volunteering. The resident of Alexandria, Virginia, previously assisted at a power-of-attorney workshop.

Noting that his Spanish-language fluency made giving his time to this effort a natural for him, the Puerto Rico native added, "We're Americans by birth. We're lucky," before heading back to his next client.

As some from the first group of families began to finish up their sessions, one young woman approached Sandoval-Moshenberg and asked if she could volunteer as a translator for the rest of the afternoon to pay for the services she'd received.

That's not the first time someone has tried to pay it forward, he said. Others have offered to give him what little cash they might have on them; he does not accept. Instead, he thanks them, gives them his business card so they can follow up on volunteering another time, and sends them on their way.

[Julie Bourbon is a freelance writer and editor in Washington, D.C.]