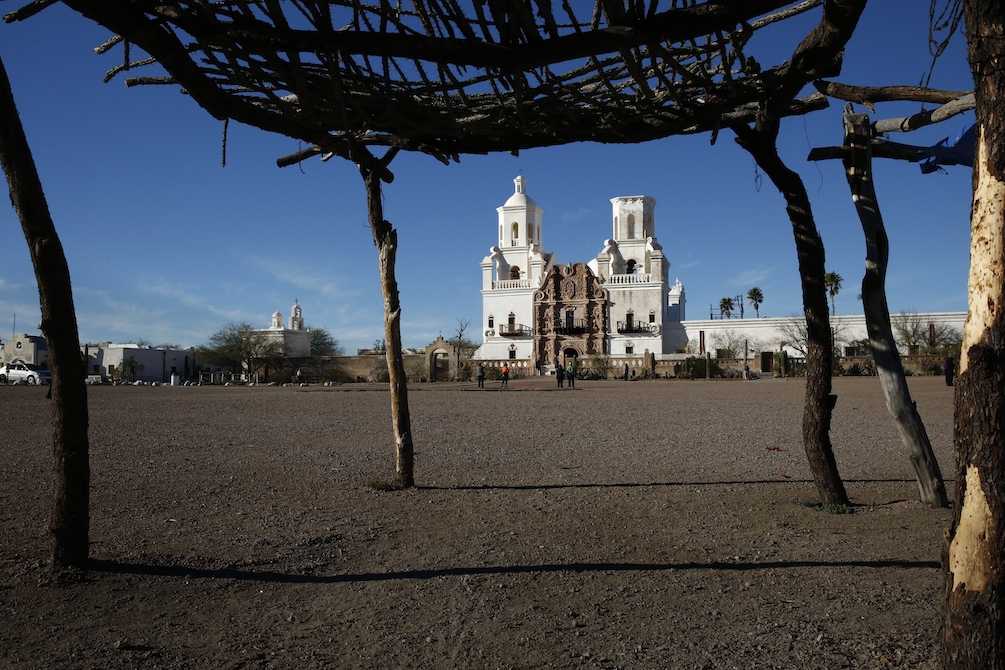 Leslie Woodcook Tentler's American Catholics: A History sails between the Scylla of over-generalization and the Charybdis of perpetually getting lost amidst minor themes. Tentler admirably assigns the people and events she chronicles their appropriate significance, which is a lot harder to do than a non-historian might suppose.

Tentler also indicates in the title that she intends to focus not only on the institution of Catholicism, but on the people who populate that institution, peppering her thematic chapters with short biographical profiles of Catholics who epitomize the themes. The book starts with a sketch of Jesuit Fr. Eusebio Kino, the great Jesuit missionary of the Southwest. A reader might pass over a dry recitation of the religio-cultural atmosphere on the frontier of the Counter-Reformation Church, but in Kino we see the heightened concern for discipline and education of the clergy bearing fruit in vigorous, selfless missionary work.

Tentler then details the broad outlines of Spanish and French Catholic settlements in what would become the United States before turning to the arrival of Catholics in the British colonies. Of the three experiences, the British were the most hostile to the indigenous populations and the French the least. Tentler writes, "in their ability to live among the Indians, speaking their language and to many tribal ways, French Jesuits came closer than other colonials to a genuine transcultural encounter, which gave rise not just to respect for the other but to a richer sense of Christian universalism." It is interesting to imagine how the development of Catholicism would have been different if the 1759 Battle on the Plains of Abraham in Quebec had resulted in a British defeat instead of a British victory.

The Spanish and French legacy would live on in scattered place names and some exquisite mission churches in the Southwest and up the California coast. But it was the culture of the English colonies that would dominate the future U.S. culture, and religion was no exception. "Colonial Protestants, like their coreligionists in England, saw Catholics as opposed to personal liberty and loyal to a hostile foreign power, by which they meant the pope," she writes. Tentler adds that in Calvinist New England, "anti-Catholicism functioned with particular power as a source of identity and social cohesion."

I regret that she did not cite the work of historian Patricia Bonomi on the role of anti-Catholicism in the fashioning of the revolutionary ideology in the late 18th century, providing a new branch from the tree of anti-Catholic prejudice in the young republic. Perhaps when you study anti-Catholicism, you are no longer studying Catholics. Still, when the Puritan intellectual edifice came crashing down in the 19th century, anti-Catholicism did not die with it, in large part because writers like John Wilkes in Britain and John Jay and John Adams in America had translated religious bigotry into a political prejudice.

Where Tentler is excellent is in seeing how abnormal the Maryland experience was from the dominant story that followed. Maryland's Catholic gentry was rural and wealthy, while the dominant narrative of Catholics in the United States would be written by desperately poor immigrants who lived mostly in urban enclaves. Maryland was served almost exclusively by Jesuits and ex-Jesuits. She notes that of 54 priests drawn from the Maryland gentry between 1759 and 1773, 49 became Jesuits. Unlike the nations of Latin America, where religious clergy would be at parity or dominant vis-a-vis diocesan clergy, in the U.S., diocesan clergy would predominate. In part, this was because of the introduction of Sulpician spirituality, with its emphasis on parish priestly life, through that society's priests being employed at the young nation's first seminary, St. Mary's in Baltimore.

Tentler puts a foot wrong when she writes of the first bishop in the United States, John Carroll, that:

Carroll's brand of Enlightenment Catholicism was doomed by more than what soon emerged as a trend toward the centralization of ecclesial control in Rome. Heavy immigration to the United States in the 1840s and after brought masses of impoverished Catholics whose lives had hardly prepared them to share Carroll's assumptions and worldview.

The canard about "Enlightenment Catholicism," shared by other historians before Tentler, was decisively debunked by Jesuit Fr. Charles Edward O'Neil in an essay he published in the book American Preaching and Piety in the Age of John Carroll. The difference between the Maryland tradition of Carroll and what followed was stark, but it had little to do with the Enlightenment. The piety of the poor who came later beat firmly in the heart of the man who dedicated his cathedral to Mary under the title of the Assumption. 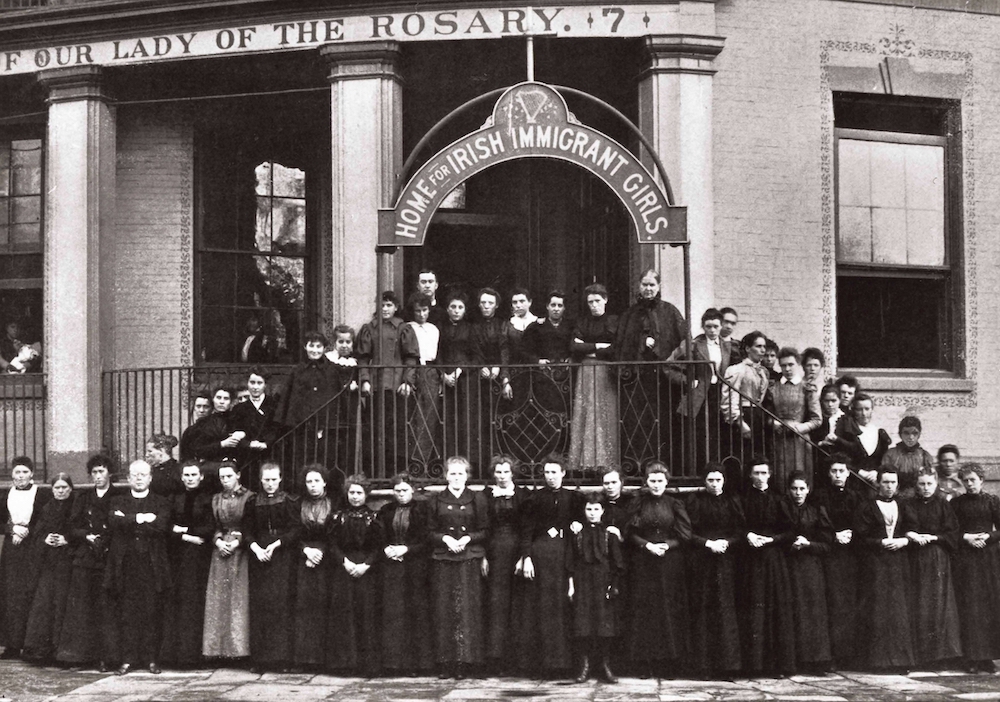 Residents and staff of the Home for Irish Immigrant Girls in New York pose for a photo around 1908. The home served as a mission for young women who emigrated from Ireland to the United States from 1883 to 1954. (CNS/Courtesy of the Irish Mission at Watson House)

These introductory chapters are typical of the rest of the volume: Tentler is comprehensive, judicious and tells a good story. Histories such as these are never page turners, but her prose is never dull. One might quibble with some minor details but, on the whole, this is an excellent book. The section on frontier Catholicism was especially enlightening for those of us who grew up along the Eastern seaboard: The roots of some later dynamism in the Catholicism of the Midwest had its roots in the frontier experience with its lack of clergy, proximity to non-Catholics and a shared sense of social obligation.

On both the frontier and in the urban strongholds that emerged, the rigorism of Jansenist leanings is evident, a curse that came first with the French clergy and later with the Irish. It would be comical to read Tentler's account of the strict moral regimen demanded by Fr. Stephen Badin, the first priest ordained in the United States, as he warned the young people of Ohio, Kentucky and Indiana against dancing and kissing — if that rigorist foolishness had gone to the grave with him. Sadly, the Jansenist itch is still a problem in the U.S. church.

The other thing that came with the Irish — and most immigrants — was abject poverty. Ethnic Catholics know the success stories among their ancestors but, of course, hundreds of thousands of immigrants died from the diseases that accompany urban poverty, or from drink, or from abusive relationships. Their stories cannot be forgotten, and Tentler does a fine job explaining how caring for the immigrant flocks consumed all the attention of the church's leaders, both clerical and women religious. The Catholic ghetto they built achieved its own excellences as schools, hospitals and charitable organizations arose. Catholic bishops could be conservative or they could be more open to new ideas, but they all needed to be builders.

Tentler carries her story into the 20th century and ably examines the assimilation of Catholics that had been the dominant motif of Catholic religious experience in the last century. Only with the arrival of affluence did the bonds of faith begin to grow brittle and then break. In the postwar suburbs, it no longer mattered what church you attended. It was the kind of car you drove that caught your neighbor's attention.

Regrettably, Tentler carries the story too far, into the post-conciliar era. (She uses the neologism "postcouncil" which I find clunky and unfortunate.) There is still so much we do not know, even about Vatican II. Having conclusively demonstrated how thorough the Romanization of the U.S. hierarchy had become, how do you assess the bishops of the late 1950s and later, when the archives for the papacy of John XXIII and all later popes are not yet open to scholars? 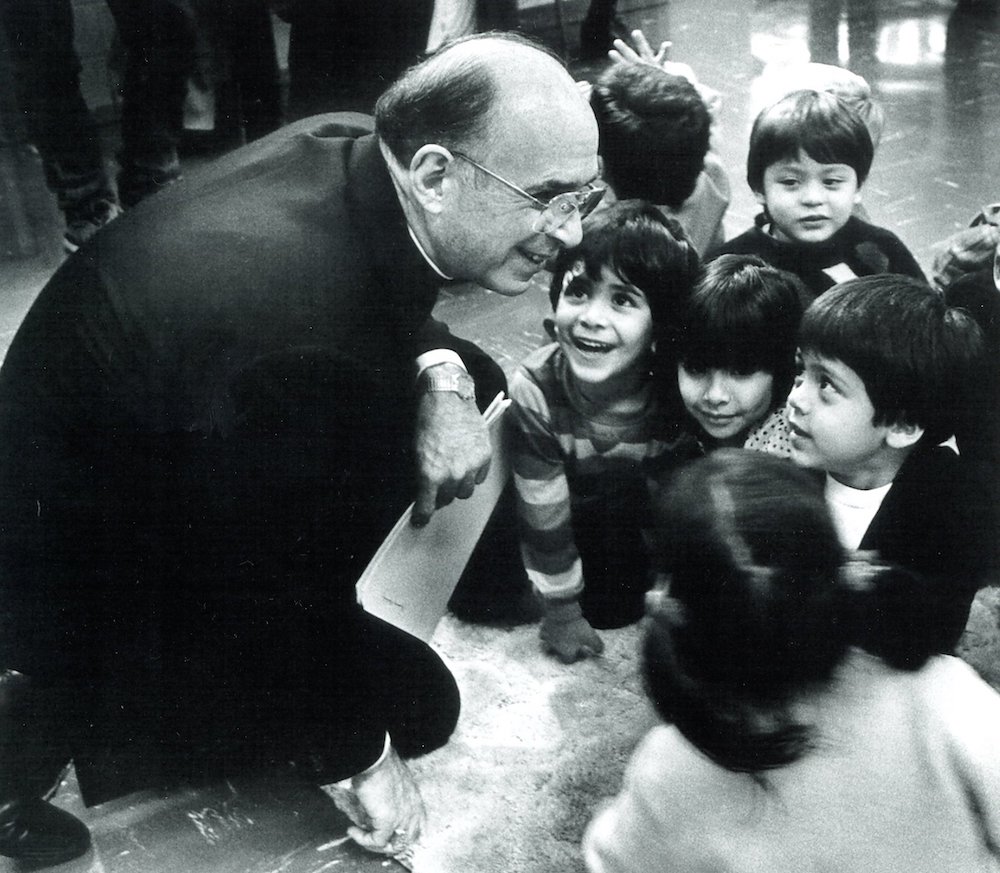 The late Chicago Cardinal Joseph Bernardin is pictured with children in an undated photo. Over a two-year period, in 1991 and 1992, the cardinal developed a comprehensive plan to address clergy sexual abuse and shared the plan with his fellow bishops, Cardinal Blase Cupich, Chicago's current cardinal-archbishop, said in an April 9, 2021, address for an international symposium on clergy sex abuse. (CNS/Courtesy of John H. White)

We all caught a glimpse of the complexity of the Vatican curia and the importance of personal relations in reading the McCarrick report, but we do not know what the archives in Rome contain about, say, the reaction to Humanae Vitae in 1968? Cardinal Joseph Bernardin is the subject of one fine biography, Steven Millies' Joseph Bernardin: Seeking Common Ground, but complex leaders require several biographers before a general history of their time can be attempted. Barry Hudock's fine book on Jesuit theologian John Courtney Murray, published only six years ago, goes a long way toward understanding this complex figure, but we need better histories of his opponents before we can adequately assess the great debate about religious liberty. Cardinal Bernard Law has yet to be the subject of a biography: How do you consider the clergy sex abuse crisis without consulting such a volume?

In short, journalists get to write the first draft of history, then people who specialize in issues and persons. Historians writing a generalized history are ill-advised to come so close to their own time. It was hard not to notice the increasing incidence of adverbs like "almost" and "likely" in the closing section of the book.

All that said, Tentler's book is a major accomplishment. Every 10 or so years, we need a general history of the Catholic Church in this country, as new questions emerge from our own experiences, causing us to look at our forebears differently. With a comprehensive understanding of her subject, a talent for separating the significant from the trivial, and an elegant writing style, this book sets a high standard for future historians.