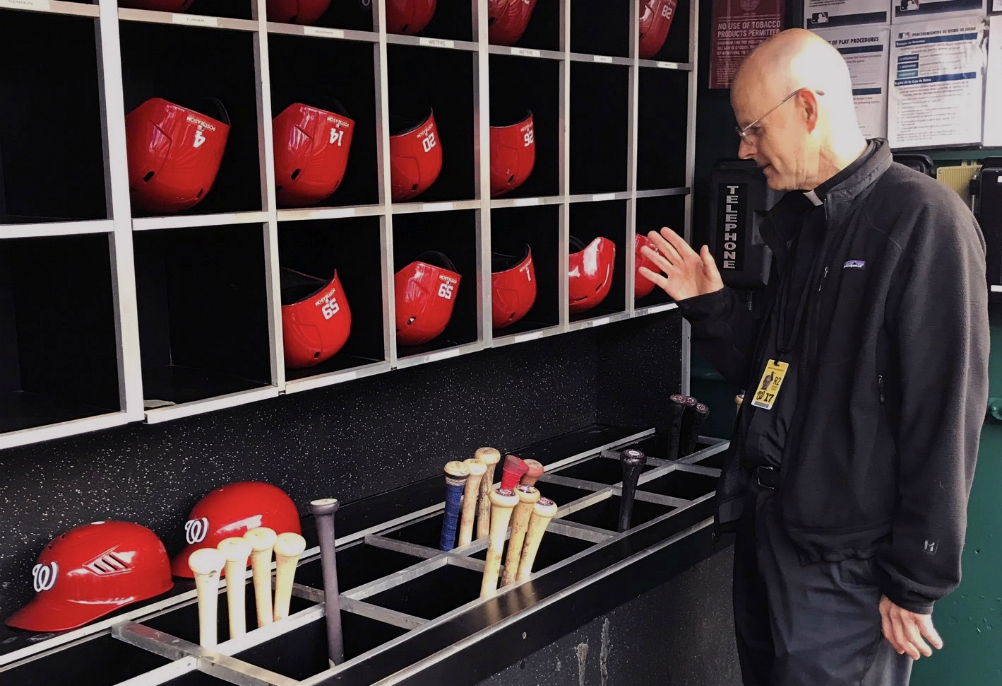 Msgr. Stephen Rossetti, a professor at the Catholic University of America and the chaplain for the Washington Nationals, blesses bats before a game during the 2019 season. (CNS/Courtesy of Msgr. Stephen J. Rossetti)

It would be funny, if the stakes were not so high, to see Republicans who just yesterday were praising constitutional originalism and invoking the intent of the founders to justify various political goals in our own time. Somehow, the debate at the Constitutional Convention over what constitutes an impeachable offense does not interest them. This 2017 article in Smithsonian by Erick Trickey highlights the relevant part of the discussion and it is very obvious that the things President Donald Trump has admitted are exactly the kinds of things the founders had in mind as impeachable.

In The New York Times, Emily Bazelon asks, "Who is Bill Barr?" The answer is disturbing not least because it implicates a variety of Catholic faith that might be sincere but is a far cry from the mainstream theological tradition. I thought Opus Dei was becoming mainstream? Maybe not so fast.

Also in The New York Times, Nicholas Kristof looks at the Pew numbers that indicate an increasing number of Americans are turning away from religion, and the younger they are the more likely they are to be unchurched. Who can realistically deny that the bigotry of some of our most prominent religious leaders is largely to blame? Conservatives continue to blame "secularism," but I agree with Kristof that there are more proximate and organized actors responsible for turning these young people off.

Relatedly, at PBS, progressive Christians in Iowa discuss how they can change the perception of Christians in public life so that it is not so reactionary. That said, I am rereading H. Richard Niebuhr's Christ and Culture, and progressives, like more conservative, exclusivist Christians, should remember these words: "Doubtless the individualistic ideal of soul-regeneration is not an adequate key to the attitude of radical Christians; but neither is the hope of social reform."

I have just been made aware of Syndicate, an online journal that sponsors symposia to discuss important books. Currently, they are discussing Cathleen Kaveny's Ethics at the Edges of Law, and the first paper comes from Elisabeth Kincaid, with a response from Kaveny. Hats off to Nicholas Hayes-Mota for launching this enterprise and framing the issues under discussion.

From Where Peter Is, turns out the U.S. is not the only place where conservative Catholic nationalists prefer their political leadership to the spiritual leadership of Pope Francis. In Brazil, a leading conservative has been attacking the synod on the Amazon and made his way into an interview with LifeSiteNews.

Speaking of far-right Catholic groups, Church Militant reported on a "Call to Holiness" conference in Detroit at which Cardinal Raymond Burke delivered another one of his none-too-subtle attacks on Francis. I note that the event was emceed, and Burke was introduced, by Trappist Fr. Aidan Logan, who is the vocations director for the Archdiocese for the Military Services. That said, it is nice to see Burke staying on after his speech and taking selfies with the attendees, kind of like Sen. Elizabeth Warren.

From Catholic News Service, a look at Msgr. Steve Rossetti, Catholic University of America professor and chaplain to the Washington Nationals' baseball team. Of course, I am a Nutmegger now, so I have been cheering for George Springer as well.