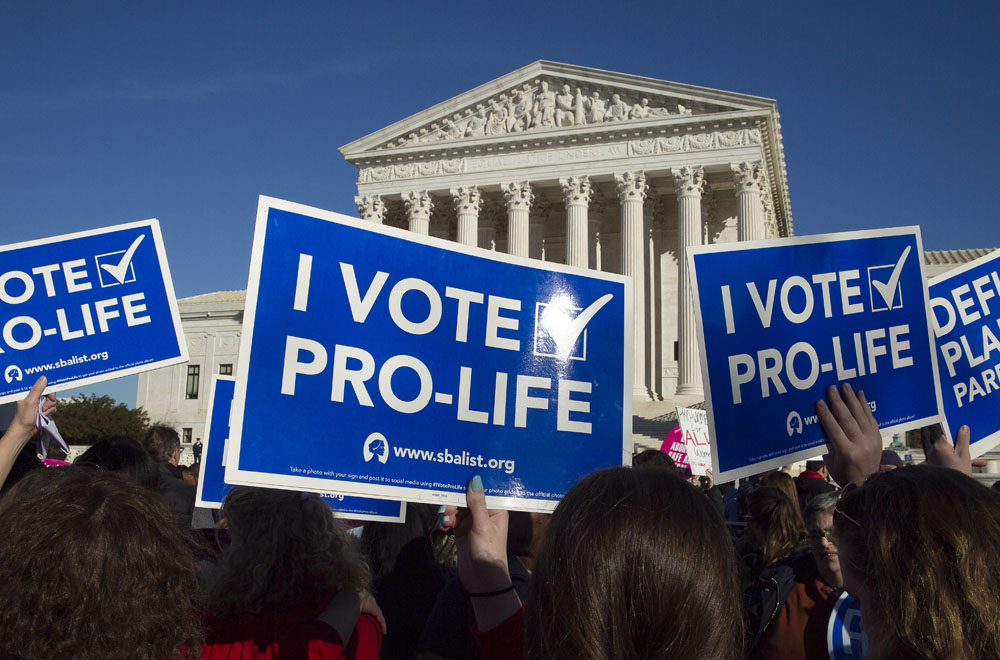 Pro-life advocates gather near the U.S. Supreme Court during the annual March for Life in Washington Jan. 19, 2018. (CNS/Tyler Orsburn)

At Salt & Light TV, our own Phyllis Zagano discusses women deacons on the show "Subject Matters." Zagano draws important distinctions as she makes her case, carefully building her argument one block at a time, and avoids the kind of sweeping manifesto-like performances that too often characterize activists' forays into the public square.

At The American Prospect Joe McCartin, who heads the Kalmanovitz Initiative at Georgetown, urges federal workers to get the flu. That is, call a "sickout" as a way of demonstrating the degree to which the whole country is being held hostage by President Trump and his idiotic desire to get Democrats to pay for his wall after his fellow Republicans declined to do so for two long years.

At The Washington Post, Kathleen Parker hits a home run by posing and answering the question "What did they do with Lindsey Graham?" The money quote:

It isn't unusual for politicians to tweak their language or style, to soften or toughen rhetoric as one's audience pleases. Still, there's something almost comical about Graham's toughening stances and head-snapping reversals. It's as though his body has been occupied by someone else, his inner Terminator liberated at last — in part, perhaps, because he's no longer John McCain's wingman. He's Maverick now.

Also at the WaPo, Marc Thiessen proves that there is no level of credulity to which he will not stoop in order to make excuses for President Trump. He defends the president's confiscation of interpreters' notes of meetings with Russian President Vladimir Putin because of all the leakers in his administration. Huh? The leaks are not coming from career State Department interpreters. They are coming from people close to Trump who are trying to position themselves near the exits. Thiessen's arguments, not for the first time, are an embarrassment to journalism.

Tomorrow, at the March for Life, we can expect some of the same, tired language that has not really convinced the American people to reconsider the issue of abortion, to shake up the debate in healthy ways, ways that will promote greater honesty about the issue and a deeper commitment to humane values. Conversely, at America, Jesuit Fr. Jim Martin makes a start at the kind of new narrative we in the pro-life movement need. Bravo.

At Politico, longtime Russia scholar and sometime policymaker Strobe Talbott debunks the idea that Trump's relationship with Putin is really no different from Bill Clinton's relationship with Boris Yeltsin. Yeltsin, remember, wanted to reform Russia in ways that advanced American interests. Talbott says the evidence of collusion is already overwhelming, but I think we should wait to hear from Bob Mueller about that.

From NowThis News, an interview with New York Knicks star Enes Kanter about the situation in his home country Turkey. Regular readers know that I think it is always foolish to look to sports stars or Hollywood actors for political insight, but this personal testimony is the exception that proves the rule, the comparison of Erdogan to Hitler notwithstanding.