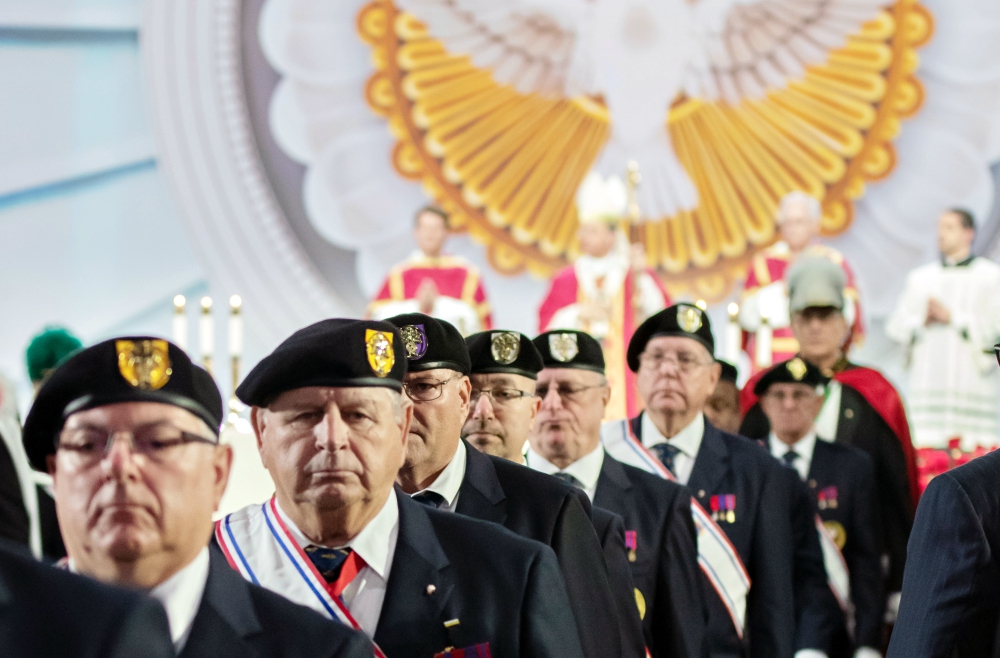 Members of the Knights of Columbus are seen during the closing procession of the 136th Supreme Convention's opening Mass Aug. 7, 2018, at the Baltimore Convention Center. (CNS/Catholic Review/Kevin J. Parks)

The best article pertaining to Martin Luther King Jr. Day? At The Washington Post, Jonathan Capehart interviews Minnijean Brown-Trickey, one of the Little Rock Nine. When asked what drew her and some of her friends to King, she says, "We thought he was cute, okay?" She also talks about how she and her teenage friends acquired the courage to stand up against the laws and mores of their time. Just splendid.

At Working-Class Perspectives, Tim Strangleman asked his students to find and share a video that had to do with precarious labor conditions, and he shares some of those videos with us. I wonder if any of these are shown at the Busch School of Business at the Catholic University of America? Or at Acton U?

At Modern Healthcare, turns out there has been a major shake-up at Ascension. Among other things, Patricia Maryland, whom I interviewed for my column on executive compensation, and who refused to answer any questions about how such excessive compensation comports with Catholic social doctrine, is leaving the company. The company's CEO and president, Anthony Tersigni, is now only the CEO. Something tells me this story is not over by a long shot.

In El Nuevo Dia, a report on Sen. Elizabeth Warren's visit to Puerto Rico on Tuesday, where she addressed the fiscal and infrastructure crises facing the island. Iowa and New Hampshire may be more important in the early stages of the campaign, but Connecticut, Florida, Illinois, New York and Pennsylvania all have significant Puerto Rican populations and those states will all matter in a Democratic primary. And Florida and Pennsylvania will matter in the general election, too. Smart move by Team Warren to head to La Isla de Encanto.

In The New York Times, Frank Bruni on the tempest in a Twitter teapot that is the Covington Catholic video story. I will stipulate that wearing a MAGA hat does not mean one is a racist, but it could mean that you are willing to overlook racism. Unless, of course, you are a teenager, in which case the racism may be your parents' and not yours. In any event, Bruni correctly diagnoses the real problem:

We react to news by trying to fit it into the argument that we routinely make, the grievance that we usually raise, the fury or angst or sorrow that we typically peddle. We have our narrative, and we're on the lookout for comments and developments that back it up. The response to the initial footage of the teenagers from Covington Catholic High School — and, in particular, to the one who wore a red MAGA cap as he stood before and stared at the drumming veteran — adhered to this dynamic.

Speaking of the fury we typically peddle, I am not averse to asking all sorts of questions of prospective judges. But it is stupid of Sens. Kamala Harris and Mazie Hirono to take a shot at the Knights of Columbus as an "extremist" organization because it opposes abortion and helped fund California's Proposition 8 campaign to ban same-sex marriage, a referendum that was held at a time when, among many others, President Barack Obama still officially opposed same-sex marriage. As I have noted before, the leadership of the Knights has become overly entangled in politics, but the vast majority of the Knights really are the backbone of a lot of charitable activities in a lot of parishes. And Knights are the kind of working-class voters Democrats need to stop alienating. That said, this breathless tribute at the National Review from Kathryn Jean Lopez makes me suspect she just wants to keep riding the K of C gravy train of conservative pundits.

Pope Francis, in a letter marking the 25th anniversary of the Pontifical Academy for Life, again made clear that a consistent ethic of life does not mean we neglect the issue of abortion, only that we not let it crowd out all other issues. And he linked the life issues to corporate culture in a way that really should galvanize liberal Catholics.

Relatedly, at The Washington Post, Michael Gerson on the "Trumpification" of the pro-life movement. The money quote: