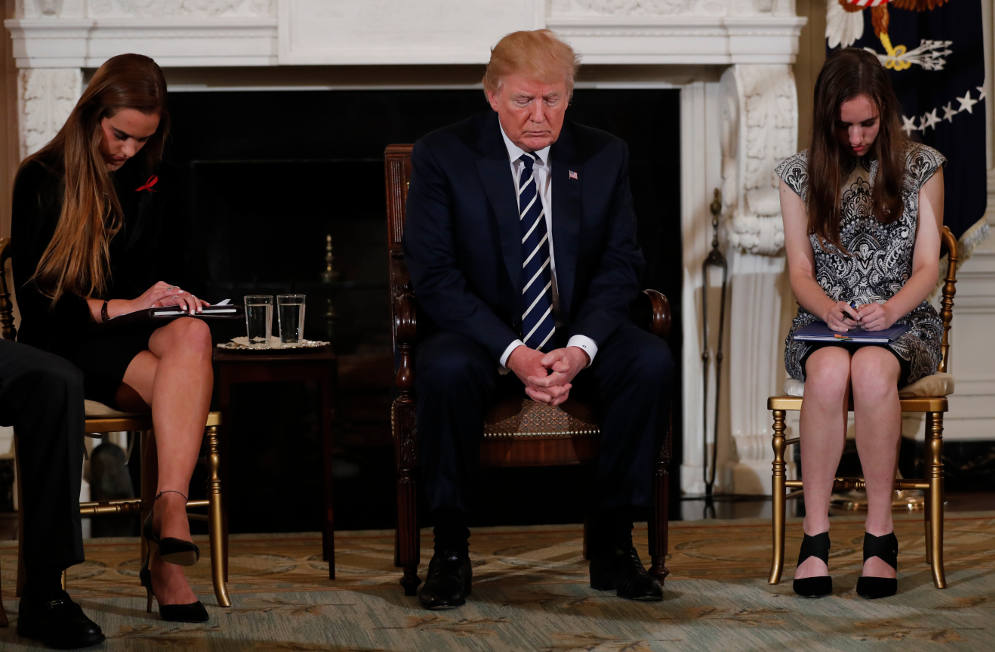 President Donald Trump bows his head during a prayer as he sits between Marjory Stoneman Douglas High School shooting survivors and students Julia Cordover and Carson Abt Feb. 21 at the White House. (CNS/Jonathan Ernst, Reuters)

"Three shots were fired ..." Those were the first words in a United Press International bulletin issued at 12:34 Central Standard Time Nov. 22, 1963. More bulletins followed, carrying the dreadful news that President John Fitzgerald Kennedy had been struck down by an assassin in Dallas.

President Donald Trump will be in Dallas today. He is scheduled to speak at the annual convention of the National Rifle Association. The organization has sought to democratize gun violence. Now school children are in danger. Moviegoers are in danger. Dancers at gay discos are in danger. Anywhere that a large number of people congregate is a target for a certain kind of mentally disturbed or hate-filled man with a gun. And it is always a man, isn’t it? Starting with the killings in Columbine, Colorado, through the most recent mass killing in Parkland, Florida, schools seem to have become the new killing fields in American life.

To be sure, data suggests that overall gun violence has declined since it peaked in 1980. There are a variety of reasons for that decline, from lowering access to lead in our air and water, which appears to dispose people to violence, to increasing the number of beat cops in all major cities. Computers have also increased the productivity of police efforts to track violent criminals.

The reason that gun violence seems to have become worse even while it is actually becoming less prevalent can be boiled down to two words: assault weapons. Overall violence may be down, but incidents in which many people are killed at one time are up. That is because it is appallingly easy to buy an automatic weapon suitable for military use. And that is a direct result of the NRA's successful effort to ensure the assault weapons ban was not renewed when it expired in 2004, and of their continual effort to make it impossible to enact any kind of reasonable restrictions on gun ownership.

For the NRA, every battle is a zero-sum game. They fight on every hill. There is no room for compromise. This is crazy, but it has been successful politically because the NRA has become a powerful lobby. The power they wield is not so much the amount of campaign cash they distribute as it is their ability to speak on behalf of a small but very noisy and very active slice of the Republican Party electorate. Candidates in a Republican Party primary challenge the NRA at their peril, especially in the rural counties that make up the geographic base of the party.

The NRA is brilliant when it comes to propaganda. They have taken a provision of the U.S. Constitution and twisted it beyond recognition. The Second Amendment, like all the 10 amendments that constitute the Bill of Rights, was adopted as a check against federal encroachment on the states. The “militia clauses” of Article One gave Congress defined powers over the militias, which were the creatures of the sovereign states up until that time. The Second Amendment was meant to guarantee that Congress never suppress the militia. Now, thanks to the NRA propaganda, and conservative justices willing to do their dirty work, the right of each and every individual to own a weapon has been turned into an expectation of citizenship.

NRA officials claim that the assault weapons ban, which was enacted in 1994, did not work. The truth is it wasn't given time to work. The law did not confiscate existing weapons, it only banned the sale of new ones, and it takes time for the weapons to wash out of the system. Ten years wasn't long enough.

Similarly, NRA officials point to the high rates of gun violence in cities, like Chicago, which also have strict gun control laws. This, they claim, proves such laws do not work. Bosh. It proves that it is very easy to buy a gun or a trunk full of guns in Indiana and cross the unsecured border between Gary and Chicago. Maybe the president should build a wall on that border!

I do not begrudge a weapon to anyone who likes to hunt. I think it is stupid, but if someone feels safer with a gun in their home, let them have one. But, why on earth does anyone need an AR-15 unless they are serving in a war zone? This strains credulity.

There is one upside to the president's trip to Dallas today. Living in his own bubble, the president is increasingly obsessed with Special Counsel Robert Mueller's investigation into possible collusion between Russia and the Trump campaign. It turns out, according to news reports, the NRA might have played a role in the Trump campaign's alleged collusion with the Kremlin.

That may prove true, it may not. But, it need not be true to prove that the NRA is itself, in the course of its daily activities, a threat to the people of the United States. They inhibit our political system in ways no other lobby has been so successful. They have robbed an entire party of the courage to stand up and protect the nation's school children. They inflict the threat of mass killing on the country in order to defend their distorted political ideology.

It would be easy to say the president and the NRA deserve each other. But, as much as the rest of us may hate the fact, Trump won an election with the help of the NRA. It has been a couple of weeks since we have seen the Parkland kids on TV. Could the NRA's evil magic continue to afflict our political system? You bet it could.