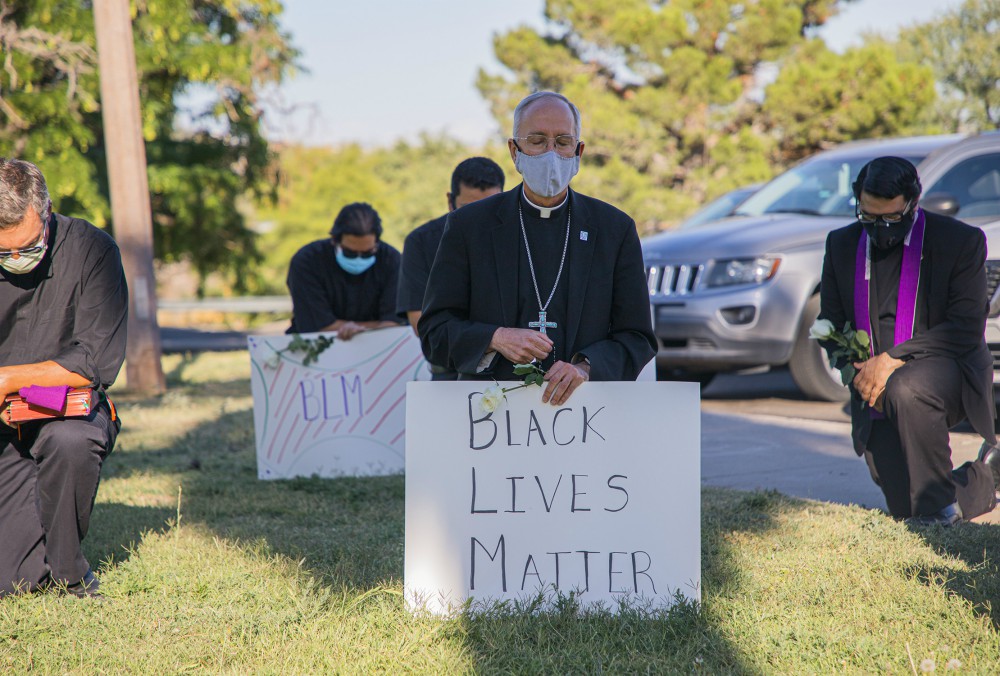 I think that sometimes we can fall into the trap of thinking that Christianity is a dead letter religion. That it's about things that happened a long time ago or about words on a page.

But every day at Mass, when I kneel before Jesus in the Eucharist, I'm reminded that he is alive and present. That Christianity is an event happening right now. The drama of salvation is something playing out every day. And we all have a role to play.

I taught liturgy in seminary. In good liturgy, our faith is brought to life. I think what we've seen play out over the last couple days is maybe a little bit like liturgy.

The other day I saw a video of a young white woman at a protest near the White House who put her body in front of a young kneeling black teenager as police officers in riot gear approached. As Jesus said, "No one has greater love than this, to lay down one's life for one's friends."

It's a scene of solidarity and self-giving that has played out across the country so many times in the last week. In El Paso, Texas, there were two young police officers who knelt down with protesters during a demonstration here and it helped defuse some tension.

There is something profoundly eucharistic about these moments and I'm so inspired by our young people. They are teaching us something.

When religion becomes stagnant, we can forget that the Word always comes to us crucified and powerless. As James Cone put it, in America, the Word comes tortured, black and lynched. Today, we meet Jesus in those tear-gassed, tased, strangled and snuffed out. That's the reason why the church teaches a preferential option for the poor. And why the church stands up for life wherever and whenever it is devalued and threatened.

To say, as all who eat from the table of the Eucharist should be able to say, that black lives matter is just another way of repeating something we in the United States seem to so often forget, that God has a special love for the forgotten and oppressed.

Many are understandably upset by the destruction and looting. It's true, none of us should crave the thrill of violence or revenge. That's wrong. We also need to recognize that we are seeing the effects of centuries of sin and violence and rights denied playing themselves out. And frankly, civil rights are not enough. That's the minimum and clearly, we're not there yet. We also need to be building a society with housing, and education and health care and just wages for all as well as the right to migrate. And then we can begin to heal.

I think leaders in the church today, and leaders everywhere really, should perhaps say a little less right now. Instead, we should stand with and give the microphone and listen to those who have been unheard for too long. To those who have suffered our shameful history of discrimination and racial profiling and police brutality. To those who are putting their bodies on the line in protest and in defense of others.

Let's look at the grace in all of this. Look at the witness of those who are bravely taking up their parts in the drama of salvation unfolding in front of us. If we look past the static, they're pointing the way to redemptive transformation. They are showing us what the reign of God looks like and what our country can look like when we all have a place at the table. Let's encourage them. And pray with them. And thank them.

With grace, they are joining the living ranks of a long faith tradition of laborers for greater justice, like Moses, Jesus of Nazareth, Joan of Arc, Harriet Beecher Stowe, James Earl Chaney, Oscar Romero, Thea Bowman and so many others. Thank God. Thank God.

[Mark J. Seitz is the bishop of El Paso, a diocese in West Texas on the U.S.-Mexico border.]

A version of this story appeared in the June 26-July 9, 2020 print issue under the headline: El Paso's Bishop Mark Seitz: Black lives matter.