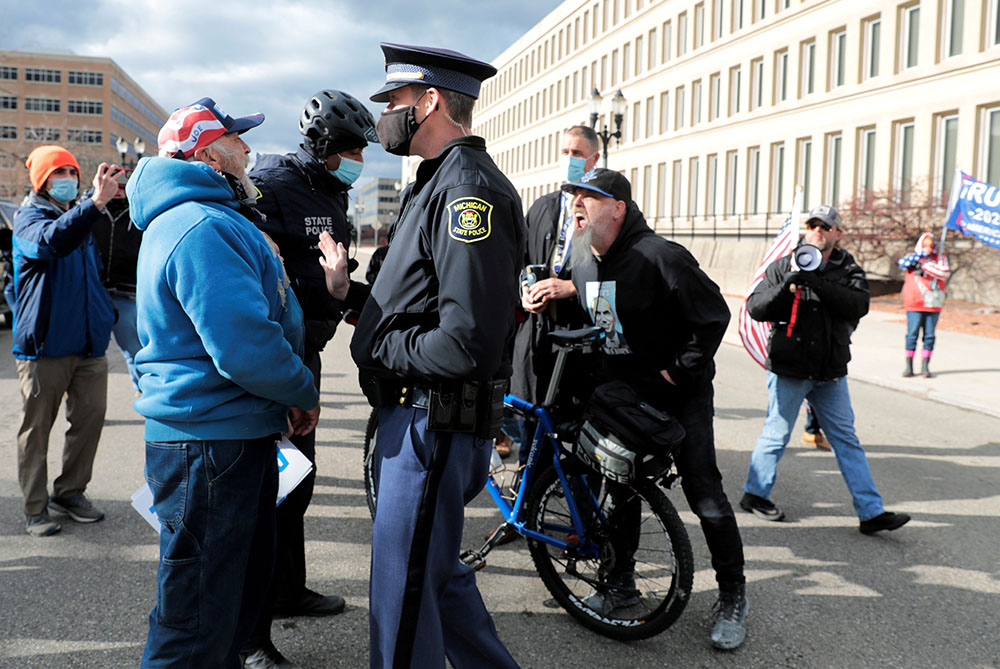 Michigan State Police in Lansing separate supporters of President Donald Trump and a supporter of President-elect Joe Biden Nov. 23 as the Board of State Canvassers met to certify the results of the election. (CNS/Reuters/Rebecca Cook)

In his first speech as president-elect, Joe Biden called for the country to seek unity, work together and heal. It was a powerful message in the wake of a contentious campaign and the chaotic, divisive previous four years.

But how can we do this?

Polarization did not end with the election of Joe Biden. The structural factors driving it remain in place. And this polarization is helping to fuel the enmity that has fractured any sense of unity among the people of the United States. It will not be easy to reduce the tension, distrust and aggression in American politics.

We are not helpless, however. And Catholics and others who share our commitment to solidarity and the common good can take concrete steps to help us move forward together. Here are a few:

Be careful consumers of media.

There has been a relentless attack on truth in recent years. Those spreading lies and conspiracy theories, meanwhile, have attacked legitimate, trustworthy news sources as purveyors of "fake news." Our society has become more relativistic (indifferent to factual reality) and nihilistic (caring more about power than the truth). Those who wish to be responsible need to take the extra time to find reliable sources of information.

An effort should also be made to find smart commentators who are thoughtful, careful, precise, nuanced and fair, rather than a balance of loudmouths on the left and right. First, find people who share your worldview. But don't stop there. Listen to smart people with other worldviews whose work shares these qualities. Find and listen to real experts. And when seeking Catholic news, pass on publications that let writers twist and distort Catholic social teaching.

Have faith in persuasion.

It is easy to give up. But for democracy to function, we have to engage in real dialogue and even respectful debate with people who have different views on important subjects. This requires listening and trying to understand what the other person thinks and why. Too often, we think about what we want to say instead of genuinely listening to the other person.

When we respond, we should appeal to shared values. That can be harder in a polarized society, but shared values are often still present. Instead of using bumper sticker slogans and feeling self-righteous, try to actually convince others to change their views. And be open to receiving new information and reevaluating your own views. There is no such thing as unilateral dialogue — both people must commit to make it real.

Learn to live with people who have bad ideas.

Persuasion will not always work. To flourish in a pluralistic society, we must live well with others, even if we do not share all their values or we find some of their views harmful or foolish. This is one aspect of putting people above ideology, a frequent request that Pope Francis makes of us. Do not depersonalize people, reducing them to a collection of political opinions. Remember that they have emotions and souls.

Challenge your own party. Catholics and others who believe in consistently protecting human dignity are called to be countercultural in our society. Joining a political party is a good thing. It increases a citizen's influence in the political process. But joining a party does not mean taking an oath to defend the party's platform. Principles should come first. If we want to act with integrity, authenticity and credibility, we must hold our own parties accountable when they come up short.

In the United States, this requires taking on a throwaway culture that is driven by an extreme individualism and libertarianism that is present in both parties. For Catholic Republicans, now is the time to reject the disease of the "alt-Catholicism" running through the veins of the American church — the bigotry, xenophobia, sexism, authoritarianism, nationalism and isolationism, and the rest of that pernicious ideology.

The response, however, should not be to support a pre-Trump Republicanism of promoting plutocracy and pro-corporate, activist right-wing judges, but to press the party to support policies that advance economic justice for all Americans, including poor and working-class Americans, and actually pass bipartisan legislation so that more Americans will get the support they need.

For Democrats, it means pressing Biden to step back from the extreme position he took on abortion during the campaign, one that reversed his long-standing support of the Hyde Amendment, and perhaps to even seek common ground in providing greater assistance to women in crisis pregnancies, challenging the pro-life movement to reverse its descent into bitter partisanship and help more women to feel like they can choose life.

Beyond abortion, Democrats should evaluate each of his decisions and efforts to change policy through the prism of the preferential option for the poor and vulnerable — and to speak up if these proposals and policies fall short. Supporting and rebuilding the middle class is vital, but it can never be an excuse to ignore those struggling at the margins of our society.

Democratic norms have collapsed in recent years. Polarization is pushing our democratic institutions to the breaking point. We have a right to participate in our government, but we will only have a republic, as Benjamin Franklin cautioned, if we do what is necessary to keep it. We are called to stand up for voting rights and to seek political reform that would make our system more participatory and democratic. We should encourage the Biden administration to treat this as a top priority.

True democracy is the form of government most compatible with human dignity. We must protect it and strengthen it.

[Robert Christian is the editor of Millennial, an online periodical on religion, politics and culture by millennial Catholics.]