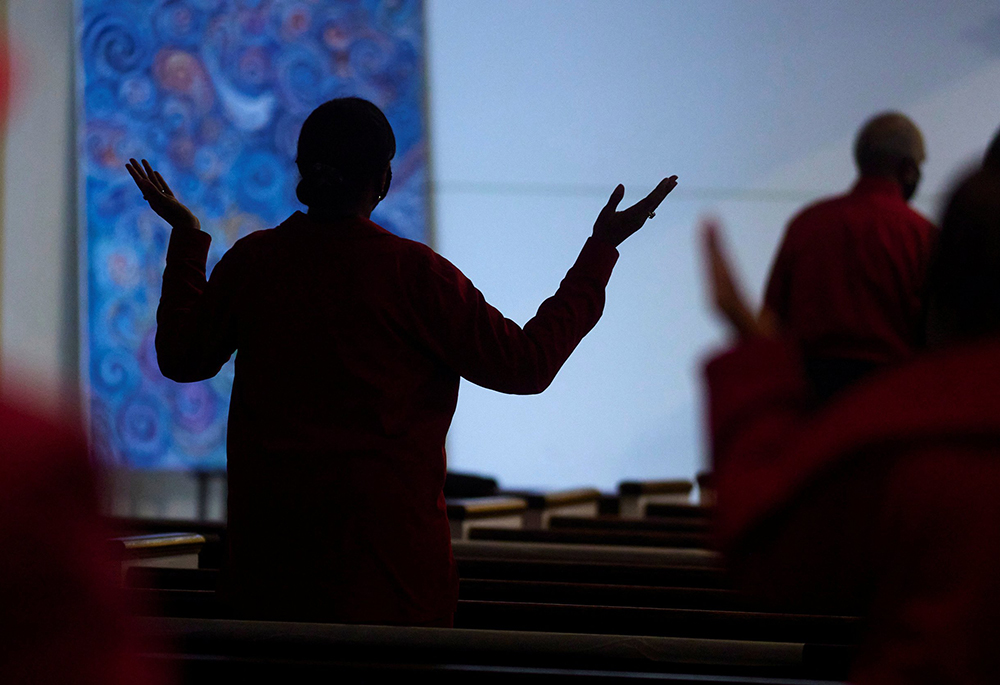 Since our nation's origin, color and race have crippled the quest for equality. The racial gap that many believed was narrowing has abruptly widened.

The murders of Breonna Taylor, George Floyd and Ahmaud Arbery, and the Emanuel African Methodist Episcopal Church massacre are tragic proofs of this divide. Random violence is overshadowed only by ever-present and life-inhibiting structural racism.

Unfortunately, the Catholic Church in the United States has both perpetuated racial injustice and lagged behind the secular world in promoting equality. This is evident when you consider more than half of white American Catholics voted for a presidential candidate (Donald Trump) who exhibited the most overt racist behavior than any U.S. president in decades. In addition, many Catholic bishops, with notable exceptions, have lagged behind in demands for racial justice.

A particularly low moment was when Los Angeles Archbishop José Gomez, then-president of the bishops' conference, named social justice movements as "psuedo-religions," which were "profoundly atheistic" and which "deny … the spiritual, transcendent dimension of human nature." While millions of young people led protests for basic human dignity, the leader of the U.S. bishops demeaned their commitment. 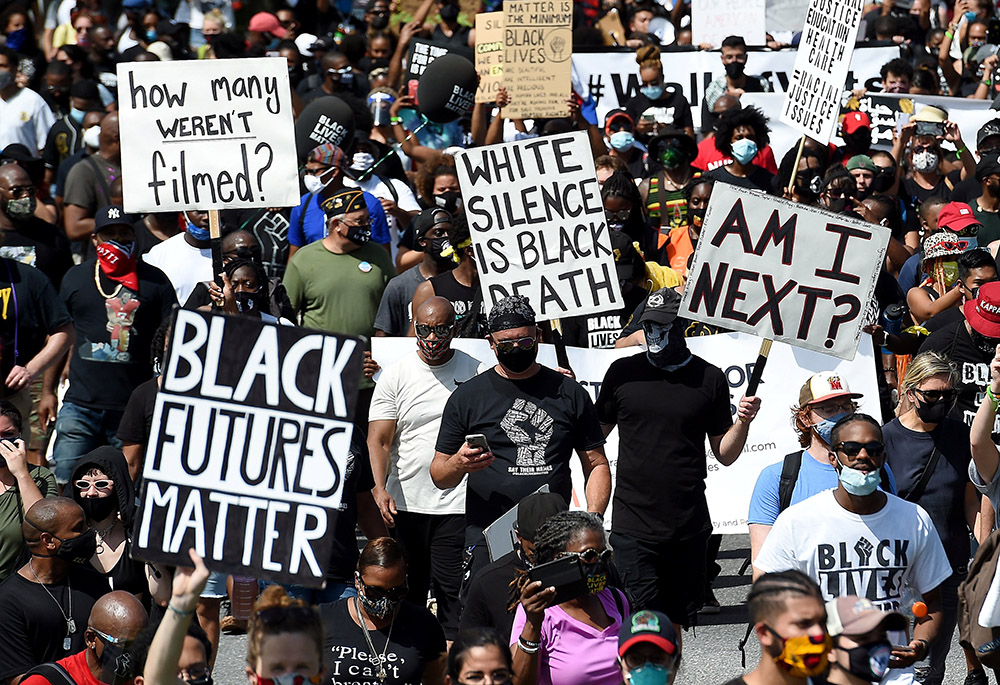 People hold placards in Washington Aug. 28, 2020, during the "Get Your Knee Off Our Necks" Commitment March on Washington 2020 in support of racial justice. (CNS/Olivier Douliery/pool via Reuters)

I recently completed a class on "The Distinctive Gifts of Black Catholic Spirituality" at Loyola Marymount University. I was struck by two realities. First, the participants' collective experience with racism and racial indifference in their parishes and dioceses, and second, their continued commitment to remain Catholic. Some consider it a miracle that any Black person is faithful to a church with historical and continued racial indifference, ignorance, and, at times, hostility. The writer of the letter to James told us two millennia ago, "these things ought not to be so" (James 3:10).

Martin Luther King Jr. once asked, "Where do we go from here?" Community or chaos? Pope Francis' request that we become a "synodal church" could answer that question. We are in the midst of a multi-year listening and discernment session for the global Catholic Church. While the initial listening sessions are complete, there remain two more years of listening, summation and discernment. Beyond the sessions and reports, the pope asks we embrace synodality not as a one-time process but rather as a fundamental way of "being church." A serious embrace of synodality as an ongoing practice could significantly transform race relations in the Catholic Church.

Francis and the 700,000 people who participated in the diocesan synod sessions in the U.S. remind us that synodality is not an event but a call we continually listen to each other, and, to the Holy Spirit. Vatican II proclaimed the church as the pilgrim "People of God," and the synodal process provides a road map for our path. Francis reminds us the word "synod" combines the Greek words syn, (together), and hodos, (way). Synodality confirms our collective vocation as journeying, together, along the "way" to God's presence, reign, and ultimate goal that all humanity and creation be gathered together with God (Ephesians 1:10). 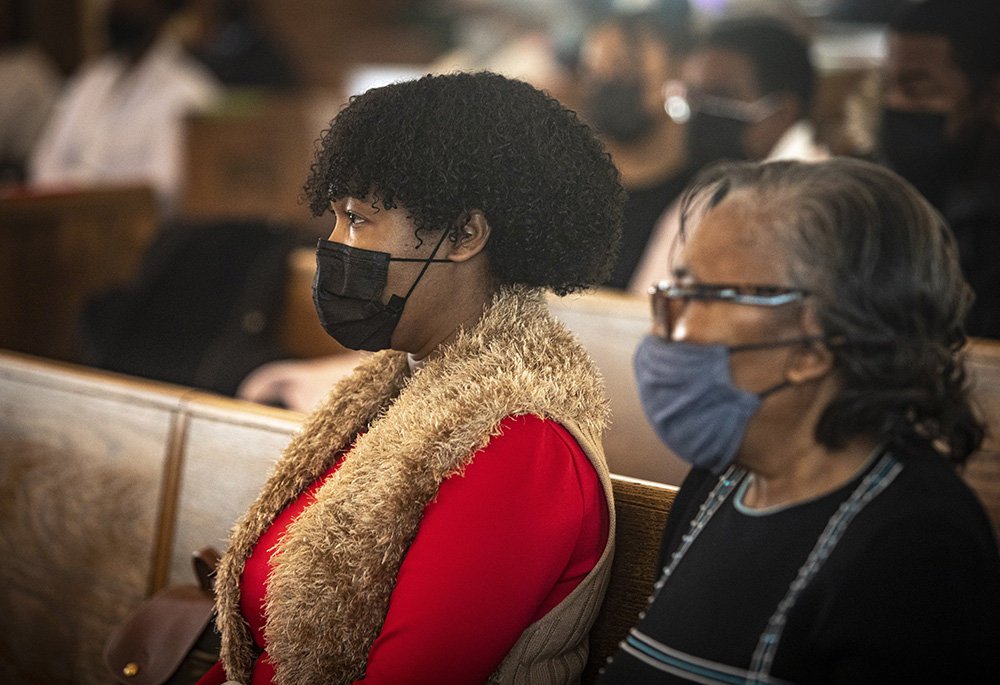 So more than a formal listening session, synodality is how we are to be as church. This is emphasized in Rafael Luciani's book, Synodality: A New Way of Proceeding in the Church. He maintains that synodality is a constitutive dimension of the church, in other words, essential and fundamental to who we are. Luciani also reminds us that Pope Paul VI said the message of Vatican II is that the church live in "perennis reformatio," perpetual reformation. What better issue to practice perpetual reformation than our doggedly stubborn issue of racial division?

Imagine the witness communicated to the world if the Catholic Church engaged in ongoing, difficult, intense and transformative dialogue and discernment regarding racial injustice? The International Theological Commission report on "Synodality in the Life and Mission of the Church" concludes that in listening to each other, we in fact are listening to the Holy Spirit, and together, discerning what God asks us to do.

Many conversations about race, if they occur at all, are flurries of defensiveness, rationalizations, excuses, blaming, shouting and accusing. Imagine the benefits of Black and white Catholics honestly and courageously praying together, listening together and discerning together?

We could begin by reading Subversive Habits: Black Catholic Nuns in the Long African American Freedom Struggle by Shannen Dee Williams. The book illuminates how white supremacy afflicted religious orders, the hierarchy, and the church in general. Next we would do well to view and discuss Ansel Augustine's video "Black Faith Matters." We could follow that with prayerful listening sessions among Black and white Catholics in parishes, ministries, diocesan offices, religious orders and other forums. These would not be one-time events, but a serious commitment joining prayer, humility, honesty and courage.

I am convinced that white Catholics, and eventually Catholics of every race, can learn much from Black Catholics. Every person and group possess unique gifts. This is true for African American Catholics. 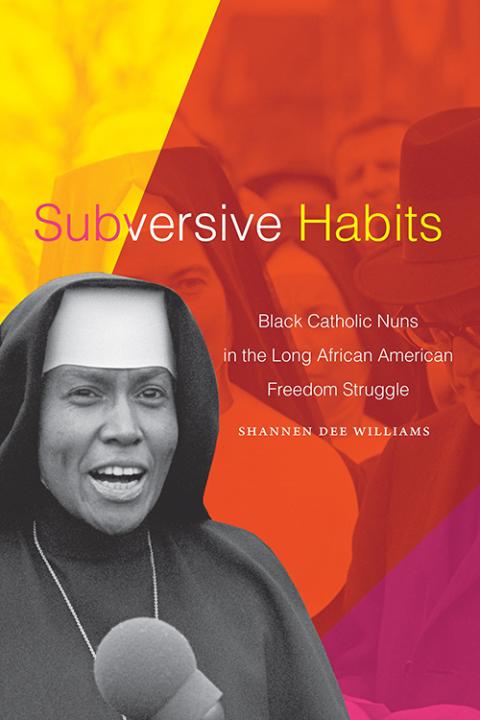 First, 75% of black Catholics, in contrast to most racial groups, worship in Catholic spaces where other races are in the majority. This differs from white and Hispanic Catholics and Black Protestants, the vast majority of whom worship primarily with their own race. A fair conclusion is that for most Black Catholics, their connection with God through the Mass, the liturgy and Eucharist is more important than being comfortable among those of their own race.

Second, since African Americans have been systematically excluded from equality and justice in our country, Blacks have a unique perspective regarding America's promises, the Catholic Church and the reign of God. Finally, many surveys of religion in America indicate African Americans are the single most "religious" group in the nation as measured by belief in God and importance of prayer.

I believe the Black-white dialogue is but the beginning step in an ever-widening mission of healing and transformation. Just as the Black civil rights movement expanded rights for women, LGBTQ persons and the disabled, so could a Black and white Catholic restoration lay the groundwork for more dialogue and change.

Those who are Hispanic, Asian, Pacific Islander, LGBTQ, divorced, people with disabilities, and others could become participants and beneficiaries of this journey together.

Imagine if we all learned from Catholics with roots in Vietnam, Mexico, El Salvador, the Philippines and elsewhere, and Catholics with lifestyles different from the "overstated norm" of heterosexual families.

In a recent article in America magazine, new Cardinal Robert McElroy wrote that Francis is giving us a model to follow in the ongoing synod process. McElroy suggests our journey together has three parts: first, that we read our times clearly; second, that we judge our times in the light of the Gospel, and third, that we act on behalf of justice.

All three of these flow from collective listening and discerning. If we listened with the "ears of our heart," as St. Benedict suggests, we could "together," show the "way," and continue the process of perpetual reformation.