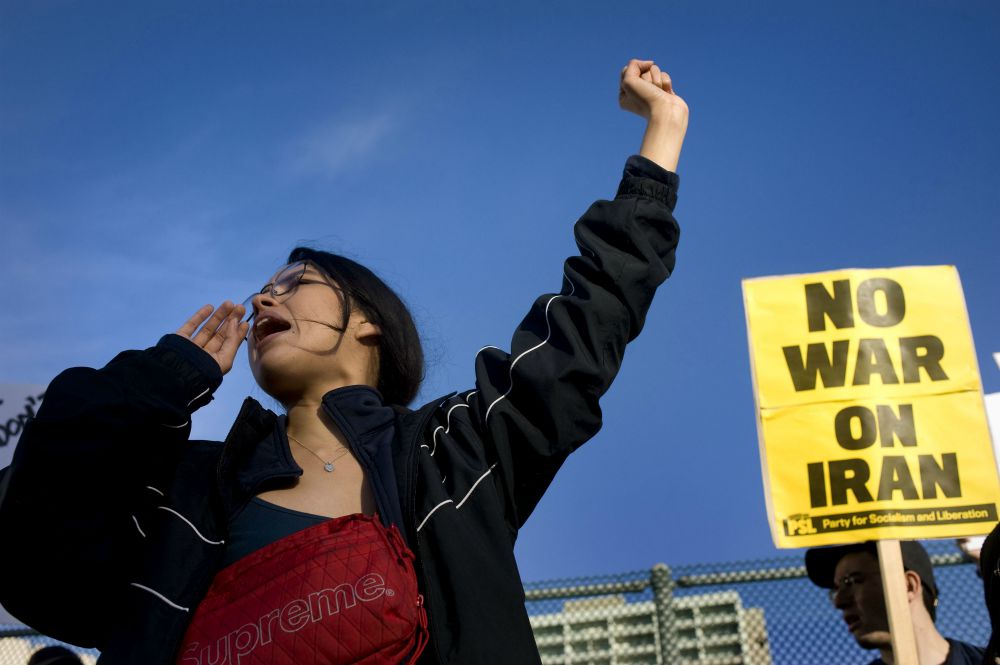 A woman chants during a rally Jan. 4, 2020, in San Diego to protest after Iranian Maj. Gen. Qassem Soleimani was killed in a U.S. drone airstrike at Baghdad International Airport the previous day. (CNS/David Maung)

The assassination of Qassem Soleimani has lodged the United States ever more deeply in a centuries-old religious struggle. This struggle within Islam had its beginnings at the time of the death of the Prophet Muhammad in a dispute over succession to the leadership of the Islamic community. It reached a decisive point when Hussein bin Ali, Mohammed's grandson, was killed on the fields of Karbala, near Baghdad, Iraq, and was eventually buried in Najaf. His death gave rise to a schism between Shiites, the followers of Ali and Ali's descendants, and the Sunni, who recognized a succession that began with Abu Bakr, Mohammed's close companion. This struggle has continued to the present.

The Shiites have always been a minority within Islam. Today they live scattered throughout the Islamic world among a much larger Sunni population They are found in substantial numbers in Syria, Lebanon and Turkey, in the southern areas of Iraq, in Kuwait, Yemen, the United Arab Emirates, Oman, Afghanistan, Pakistan and India and even in Saudi Arabia. Only in Azerbaijan and Iran are Shiites nationally dominant. But even as a minority, the Shiites are estimated to number well over 320 million.

Almost everywhere the Shiites see themselves as historically an oppressed and disadvantaged population. Their struggle for religious freedom and social standing is a deeply engrained aspect of their lives and is celebrated on the 10th day of the month of Muharram in religious processions that dramatize the martyrdom of Hussein.

In 1979, when Sayyid Ruhollah Khomeini overthrew the shah and took control of Iran, he proclaimed an Islamic revival that happened to coincide with the beginning of the new century according to the Islamic calendar. For downtrodden Shiites throughout the Middle East, Ayatollah Khomeini's charismatic declarations offered great expectations.

The first stirrings of the Shiites came in Iraq when Khomeini called on the Shiites of southern Iraq to overthrow Saddam Hussein's government. This provoked a bloody and costly eight-year war (1980-1988) between Iraq and Iran.

During this war and despite a debilitating war effort, Iran still managed to come to the support of fellow Shiites in Lebanon after Israel's invasion and occupation of southern Lebanon. Hezbollah was formed by religious followers of the ayatollah and was given aid by Iran via Syria. Connections at this time with the Shiites of Lebanon and Syria were established that were never abandoned.

The defeat of Saddam Hussein's forces in Kuwait and then the U.S. invasion of Iraq and Afghanistan brought momentous opportunities for the Shiite revival. From Herat in the west of Afghanistan, through Iran and southern Iraq to the Shiites in Syria and Lebanon — even before the middle of the century whose Shiite renewal the ayatollah had proclaimed — there came into existence the possibility of an axis across the Middle East linking the scattered communities of Shiites.

In the turmoils of the Middle East, one figure came to represent the hopes of Shiites: Qassem Soleimani. He rose through the ranks in the Iraq-Iran war and then took charge of Iran's mission to the embattled Shiites — first, in Lebanon, then Syria and, with the emergence of the Islamic State group with its militant Sunni ideas of supremacy, in Iraq as well. He was a military commander, a strategist and tactician, but above all, for those who followed him, he was a defender of the Shiites. He mingled with those who fought for him and was commonly referred to, not as commander or general, but as "Haj Qassem," a term of religious endearment and respect.

Soleimani's death has more than just military significance. For the Shiites, it was martyrdom and comparable to the death of Hussein bin Ali. All of the most powerful symbols of the Shiites have been invoked in his burial.

His coffin was carried by huge crowds in deep mourning from Baghdad to Karbala, where Hussain died in battle, and then on to Najaf where Hussein's tomb is a prime shrine of pilgrimage for all Shiites. From there, his body was taken to Mashhad in Iran, the site of the massive mausoleum of another martyred saint of the Shiites, Ali al-Ridha known as Iman Reza.

Almost certainly when Soleimani is buried in his village in Kerman, Iran, a shrine will be built to honour his martyrdom, and he will take his place among the revered religious figures of the Shiites.

A short-term tactical response will have created long lasting memories in a continuing religious struggle. Such struggles are fiercely partisan and cause sharp divisions. Yet even within the Sunni world, Soleimani was accorded a degree of respect and, perhaps grudgingly, a certain admiration as an Islamic commander.

Geopolitics introduces a different perspective and a different vocabulary. For the West, Soleimani was represented as a terrorist — thus ironically grouping him with those he steadfastly opposed, such as Sunni figures like Osama bin Laden, the founder of al-Qaeda and Abu Bakr al-Baghdadi, the caliph of the Islamic State group.

Geopolitics changes rapidly; in Islam, it is the long-term that counts.

[James Fox is an emeritus professor at the Australian National University who has been doing research on Islam, particularly in Indonesia, for over 40 years.]