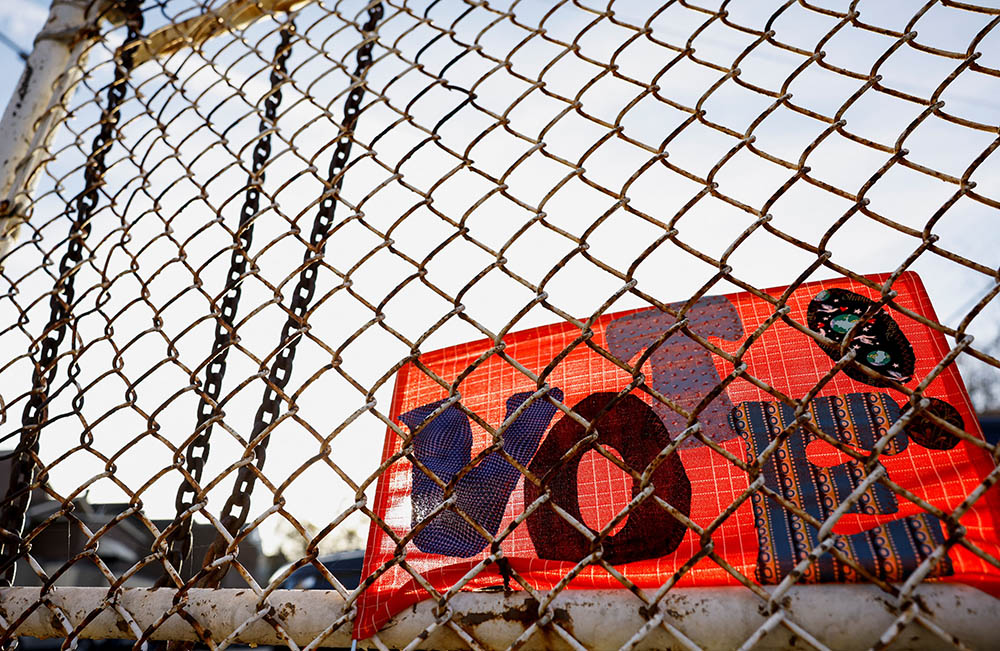 A view of a sign outside a polling location for the U.S. midterm elections in Pittsburgh Nov. 8, 2022 (CNS/Reuters/Quinn Gablicki)

Three news stories dominated the political landscape this past year, as well as the estuary where politics and religion intersect: the attempt to return to normalcy after COVID-19 and Donald Trump, the continued polarization of politics along cultural lines, and the war in Ukraine.

In some ways, 2022 witnessed some steps toward a return to political normalcy, or what passes for normalcy in America in the 21st century. Just last week, Congress passed an omnibus spending bill on a bipartisan basis, and it included provisions that should strengthen the normal counting of Electoral College votes. Of course, these must-pass, last-minute omnibus bills do not inspire confidence in the legislative process, but at least provisions of the Pregnant Workers Support Act, more aid to Ukraine, and increased Medicaid payments for U.S. territories like Puerto Rico made it into the final bill.

In August, the passage of the Inflation Reduction Act also represented a return to normalcy, as the party that controlled both chambers of Congress and the White House finally came together to pass legislation that included a minimum corporate tax, allowed the government to negotiate drug prices for Medicare and Medicaid, and invested billions of dollars in the effort to combat climate change.

On the other hand, the shadow of COVID-19 and Trump remained present, sometimes appearing to recede only to bounce back to people's consciousness.

While theories abound about what causes inflation — and, even more, what to do about it — supply-chain disruptions are generally recognized as playing a significant factor. Uncertainty feeds fear and fear fuels inflation. And some inflation, caused by higher wages especially for low-skilled service employees, is worth the higher price. Having shown themselves to be the "essential workers" they truly are, it is good to see them making more money.

In many ways, Trump had a terrible year. His legal troubles are many, the House Select Committee hearings showed his complicity with the Jan. 6, 2021, assault on the U.S. Capitol, many of the candidates he endorsed bombed at the polls, and his approval rating continues to tank. Quinnipiac's latest poll has his approval rating at only 31% among registered voters. That said, 70% of Republicans still have a favorable view of him.

While a recent Suffolk poll has 56% of self-described conservative and very conservative Republican and unaffiliated voters saying they would prefer Florida Gov. Ron DeSantis to Trump in the 2024 primaries, Team DeSantis shouldn't uncork the champagne. Suffolk did not ask those same voters if they had managed to stay awake through a DeSantis speech. The guy is dull as dirt, and Trump will run over him as he did a previous Florida governor, Jeb Bush, in the 2016 primaries. The Trump brand is damaged. The Trump threat is not done. 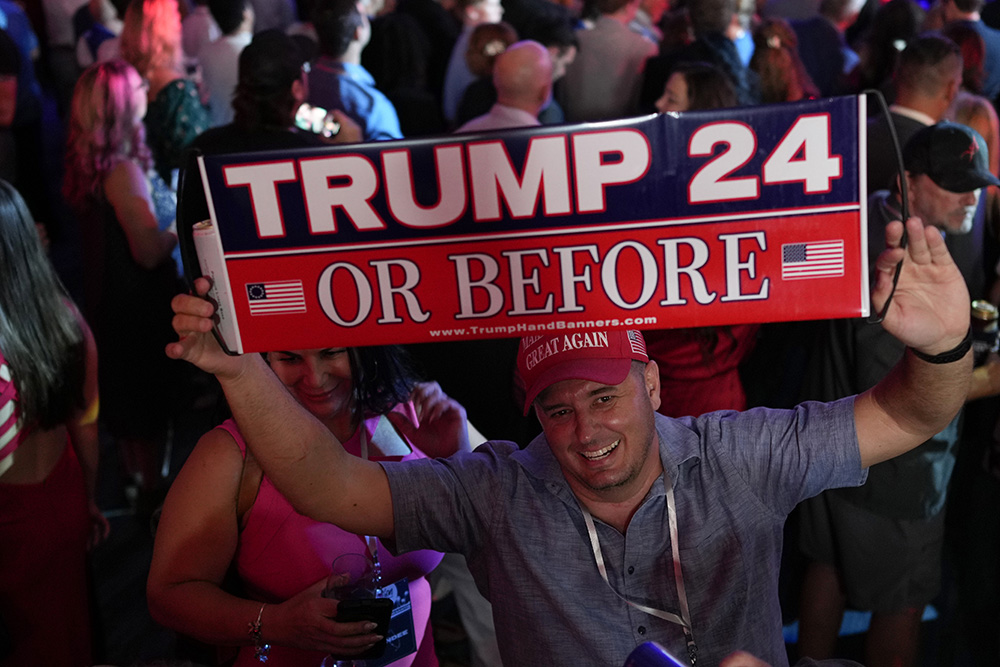 The nation's politics remains divided along cultural lines, divides that are often defined by religion, and the divisions impede progress on important liberal objectives.

For all of Joe Biden's legislative achievements, his failure to get comprehensive immigration reform through Congress is largely attributable to the fact that the issue is no longer seen as a policy problem by Republicans, but as a wedge issue. Fox News leads its primetime shows with news about crime and immigration virtually every night. Catholic social teaching — indeed, any reading of the Christian Scriptures — demands welcoming the stranger, but the Republican brand of conservative Christianity ignores that teaching.

The U.S. Supreme Court's decision in Dobbs v. Jackson, overturning Roe v. Wade, also highlighted the degree to which culture warriors define the terms of debate. Too many conservative Christians seemed incapable of grasping the need to systematically support women facing crisis pregnancies. Too many liberal Catholics refused to even acknowledge the potential humanity of the unborn child, adopting libertarian arguments and erecting false idols like "nearly 50 years of settled law." (Plessy v. Ferguson, which permitted racial segregation, was settled law for 58 years until Brown v. Board of Education overturned it.)

Few and far between were those who continued to invoke Cardinal Joseph Bernardin's "consistent ethic of life" approach, once the hallmark of liberal Catholic witness in the public square.

The decision did not, so far, reverberate with most voters the way it did with the editorial classes. In the six states where a referendum was on the ballot, the pro-choice position won every time. But Republican governors who had signed laws restricting abortion cruised to victory in Florida, Ohio and Texas. Wisconsin Democratic candidate Mandela Barnes bet the farm on the abortion issue, but he lost to incumbent Republican Ron Johnson. 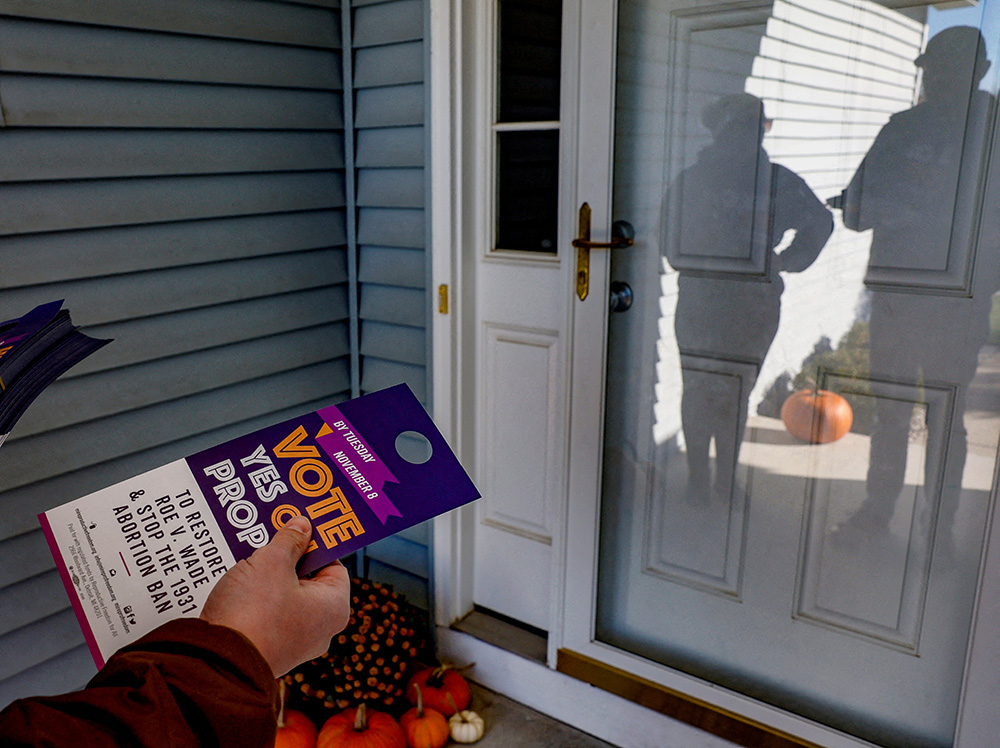 People in Dewitt, Michigan, canvass a neighborhood Nov. 7, 2022, in support of Proposal 3, a ballot measure to codify a right to an abortion. The measure was approved by 56% of voters in the Nov. 8 midterms. (CNS/Reuters/Evelyn Hockstein)

As the reality of abortion restrictions becomes apparent, there may yet be more of an electoral reckoning, but so far, the results are a mixed bag.

The Respect for Marriage Act, which passed Congress with bipartisan support, might help convince the culture warriors to recognize that, unlike abortion, the fight over gay marriage is done. Churches should not be forced to do anything that violates their teaching, but married gay couples can rest easy that their marital rights are secure.

However, the push to stigmatize traditional notions of gender, so far mostly confined to academic and activist circles, risks antagonizing a whole new generation of otherwise tolerant people. The debate over transgender swimmer Lia Thomas crossed some typical left-vs.-right divides but mainstream media prefers easy narratives. Left-leaning outlets publish uncomplicated tales of self-actualization and right-leaning media publish horror stories, but most actual members of the LGBT community are more complicated — and interesting — than those narratives permit.

The Catholic Church is in a bit of a bind regarding public policy and abortion. Our doctrine requires an almost total ban with virtually no exceptions, and no law in any state is likely to approximate such a stringent policy. The most important thing for the church to do now is support women and children so that our pro-life witness is divorced from conservative culture war politics. It would have been wonderful if the U.S. bishops' conference had supported the Respect for Marriage Act, and abandoned that culture war battle. There was no, repeat no, doctrinal reason not to do so. Their reasons are political at worst and cloudy at best. 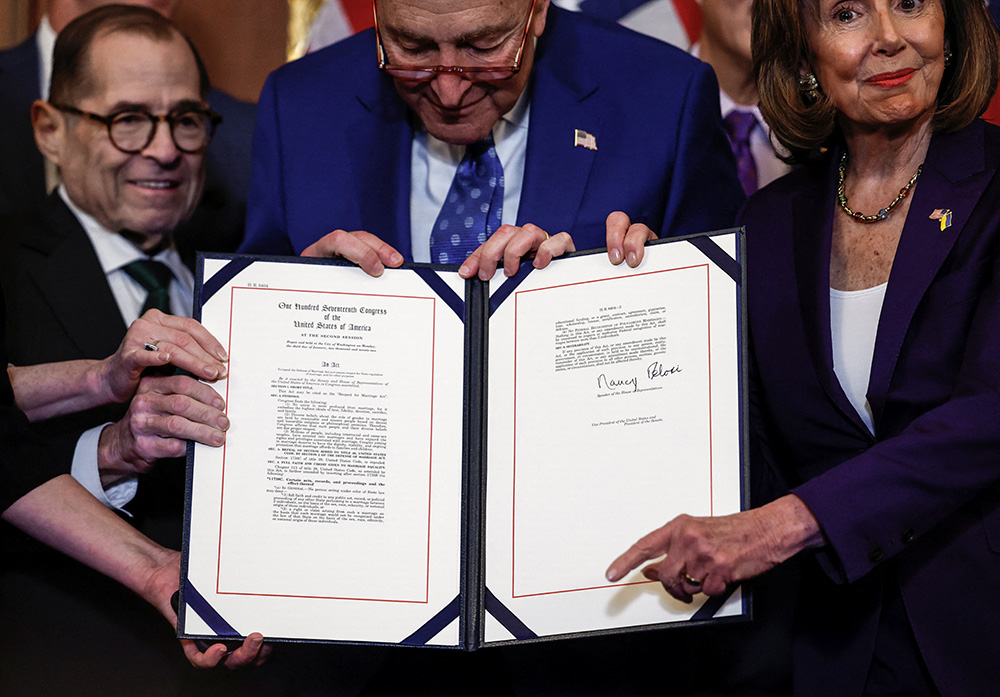 What is clear is that Democrats have trouble winning in large swaths of the country. The Democratic Party is simply not a player in those trans-Mississippi states like the Dakotas, Iowa, Missouri and Arkansas. Democrats used to win in some of these states and progressive Midwestern Catholics were a large part of the reason. Tom Daschle represented South Dakota in the Senate from 1987 to 2005. Tom Harkin won his Senate race in Iowa in 2008 with 62.7% of the vote. Claire McCaskill represented Missouri until 2018. Bill Clinton was from Arkansas.

Now, progressive Catholics are fewer, and the Democrats rely on the more socially liberal coasts. A party that represents Wall Street and Silicon Valley, but very little in between, is not likely to embrace the economic populism at the heart of Catholic social teaching, and will also show little tolerance for the more conservative social values at the heart of Catholic moral teaching.

That may not bother most Democrats, but try breaking a filibuster when your party has no senators from the middle of the country outside Illinois and Minnesota.

One other thing should haunt the Democrats. Yes, they beat the historical odds in holding onto the U.S. Senate and limiting their losses in the U.S. House to a minimum. But many of those contests were against Republican opponents who can charitably be labeled bonkers. Democrats can be grateful that Sen. Rafael Warnock defeated former football great Herschel Walker, but Walker was such a lousy candidate, the fact the contest went to a runoff should be a wake-up call for Democrats. Dreadful GOP candidates also helped Dems win in other states like Pennsylvania and Arizona.

The only issue that united most Americans was support for the people of Ukraine in their brave and remarkable defense of their homeland. Even as the prospect of indefinite support lost ground in one December poll, large majorities supported continued military aid (65%), economic aid (66%) and sanctions on Russia (75%). Most surprisingly, 73% support accepting more Ukrainian refugees.

Polling is not a science, to be sure, but President Volodymyr Zelenskyy's emotionally powerful visit to Washington just before Christmas will likely see all those numbers move up. 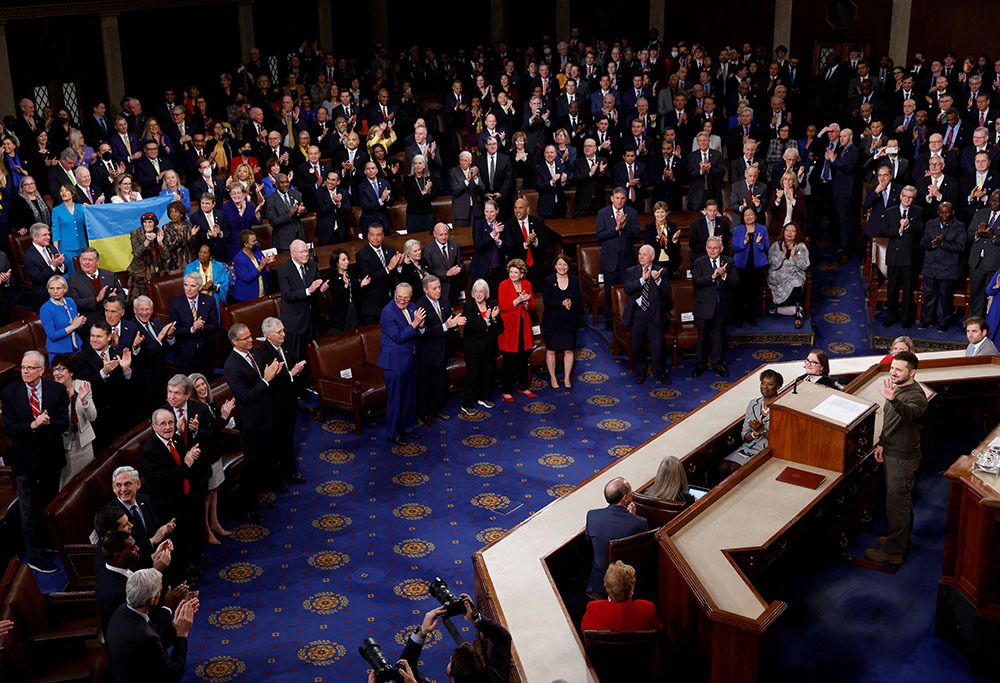 Ukraine's President Volodymyr Zelenskyy receives one of many standing ovations as he addresses a joint meeting of Congress in the House Chamber of the U.S. Capitol in Washington Dec. 21, 2022. (CNS/Reuters/Jonathan Ernst)

As discussed in my column on Monday, the Catholic Church's traditional just war theory, so much abused in recent decades, has been shown by the war in Ukraine why it remains the principal moral approach to war in this tormented vale of tears. As I reported earlier this month, however, we Catholics have much to learn from our Orthodox fellow Christians about how their theological approach to sin might provide assistance to us as we develop just war doctrine to include postbellum consideration.

Regrettably, not all religious involvement in politics is so thoughtful and morally cogent. People on both sides of the political divide continue to invoke their religion to justify political ends in the crassest of ways.

Conservatives are better at it to be sure, and more inclined to weaponize their faith, literally and figuratively, as we see in their embrace of the Second Amendment as a kind of God-given ordinance. Catholics for Choice vulgarly splashed its libertarian creed on the façade of the National Shrine of the Immaculate Conception. Mr. Frank Pavone was interviewed on Fox News, in collar, self-identifying as "Father" and blaming his laicization on his pro-life stance, even though every single person who was involved in his laicization, including his bishop and the bishop of Rome, are ardently pro-life.

2022, then, was a year of modest successes at best, apart from the stunning resistance in Ukraine. It was fitting that the year ended with Zelenskyy speaking to Congress. His moral stature is so large at a time when so much of our politics is so small. Our culture war fights are fought at fever pitch, but the determination of the Ukrainian people doesn't need to shout.

We turn political losses into civilizational threats while Ukrainians endure unimaginable suffering to face a very real threat. Worst of all, religion has become complicit in our smallness.