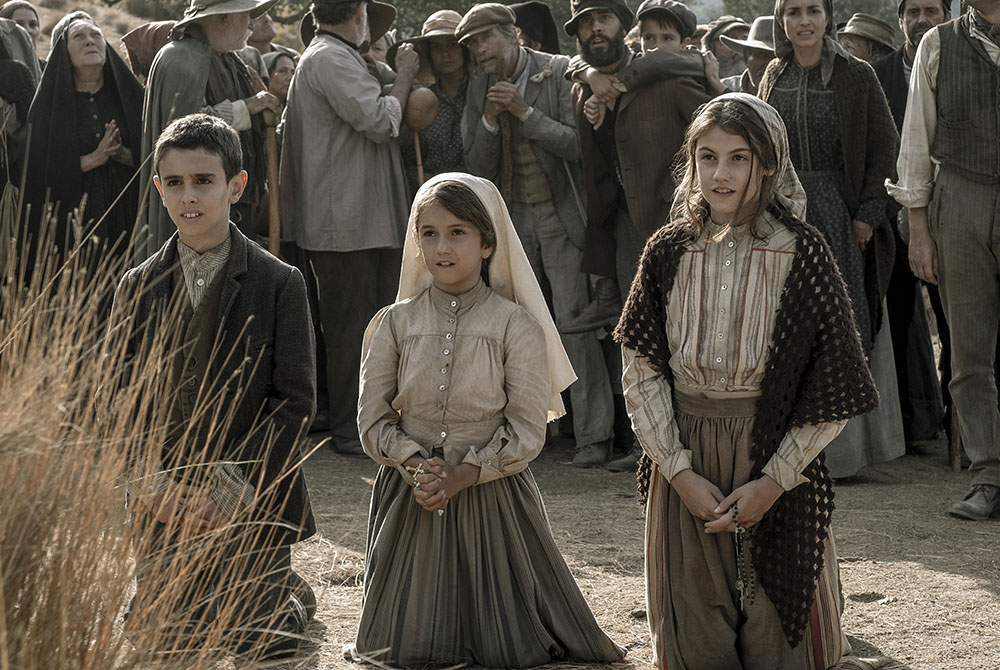 Hollywood has been looking for a way to give audiences the big screen experience in this era of social distancing. Classic film series are happening in outdoor venues in Los Angeles but now, through the efforts of an entertainment and events group called A-List Communications, new studio and independent film releases can be seen via pop-up drive-ins in metro areas that may no longer have traditional drive-in theaters. These new venues are CDC compliant and can implement local safeguards as well.

The first new film to enjoy this new approach to film distribution is director Marco Pontecorvo's "Fatima," which opened Aug. 28 in theaters. The first screening was July 13 at the Hard Rock Stadium in Miami. The premiere of the film was held in Los Angeles' outdoor Palladium Theater in Hollywood on July 19 with actor Goran Višnjić, who plays the mayor of Fatima in the film, in attendance.

The screening at Soldier Field July 28 in Chicago was a fundraiser for the Daughters of St. Paul, whose bookstore nearby was broken into and looted during the racial unrest following the killing of George Floyd. Pauline Sr. Tracey Dugas was featured in a three-minute video to talk about the film being a light to a city in conflict, and a call to prayer and calm. 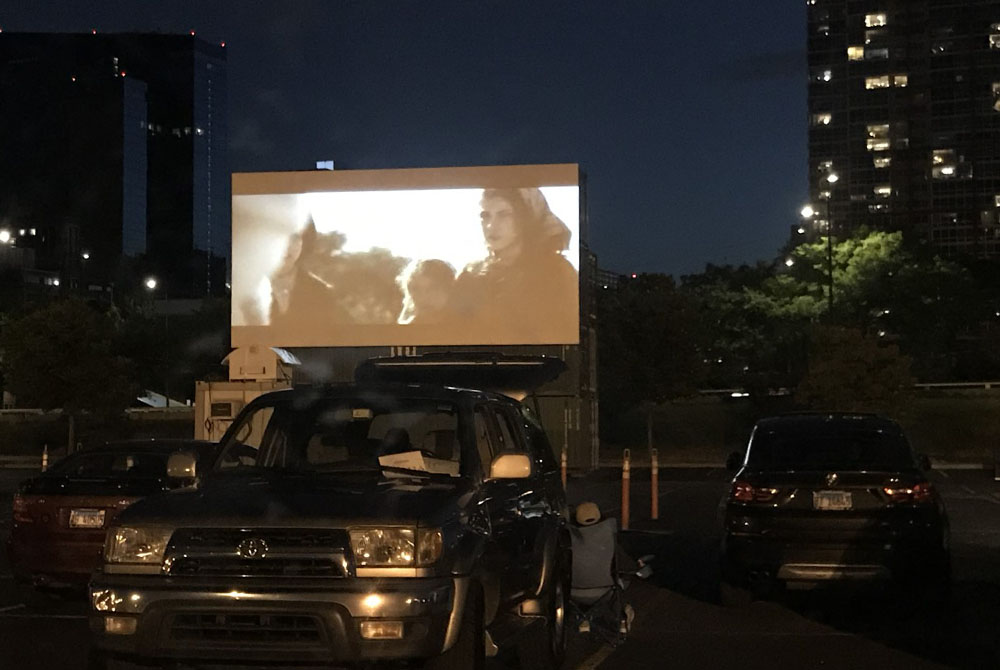 "People were thrilled to be out to see a film," Dugas said. "Several people told us after that they loved the film but going in their cars was a highlight. They liked the drive-in feel."

"Fatima" is a feature film scripted by Pontecorvo, Valerio D'Annunzio and Barbara Nicolosi. World famous tenor Andrea Bocelli sings two original songs by Paolo Buonvino, "Gratia Plena" sung with children in 12 languages, and "Gloria" as the final credits roll. The producers went all out for an excellent cast, several well-known to U.S. and international audiences.

Most Catholics are familiar with the story of the apparitions of Mary, the mother of Jesus, to the three shepherd children, 10-year-old Lúcia (Stephanie Gil) and her younger cousins Francisco (Jorge Lamelas) and Jacinta (Alejandra Howard) in a field outside the town of Fatima, Portugal in 1917.

The film opens in Coimbra, Portugal, with the arrival of Professor Nichols (Harvey Keitel), an agnostic, at the Carmelite Convent to visit with Sister Lúcia, of Jesus and the Immaculate Heart (Sônia Braga). He questions Lúcia about the events of 1917. She tells him that she cannot convince him of anything; she can only witness to those events.

The film flashes back to the appearance of an angel to Lúcia in the days before Mary, the mother of Jesus, comes. He shows her scenes of the war and her brother Manuel (João Arrais), who is in the army. Lúcia's mother, Maria Rosa (Lúcia Moniz), bargains with Mary to save Manuel and promises to do even more for the parish.

On May 13, 1917, as the children are tending their sheep at Cova da Iria, a lady in white (Joana Ribeiro) appears to them. They ask her, "Who are you? Where do you come from?" She responds, "I come from heaven." "What do you want?" Jacinta asks, to which the lady replies that they are to come back to Cova da Iria every month at the same time for six months, that they are to pray the rosary to bring peace to the world and end the war. "The world needs peace," she says. Francisco can only see her; he cannot hear her so the girls must repeat everything to him.

The children resolve to keep this strange happening a secret, but Jacinta blurts out the story. Before long the townspeople are coming to their home asking to see "the seer." Maria Rosa is adamant that Lúcia must stop lying. Lúcia visits the statue of Mary in the parish church, and then crawls into her mother's bed for comfort. As the film unfolds, and month after month the children strive to get to Cova da Iria on time, their efforts are thwarted and challenged by their parents, their neighbors, the anti-clerical civil authorities, and the clergy as well. Meanwhile, the children pray the rosary as they tend their flocks.

Mayor Artur Santos (Goran Višnjić) is under pressure from Lisbon to stop the unrest going on every month as more and more people gather for Mary's appearance. The lady has told the children that they will be messengers of "faith in her Immaculate Heart." The children ask for a sign so the people will believe she is really there, and she promises a sign on Oct. 13. 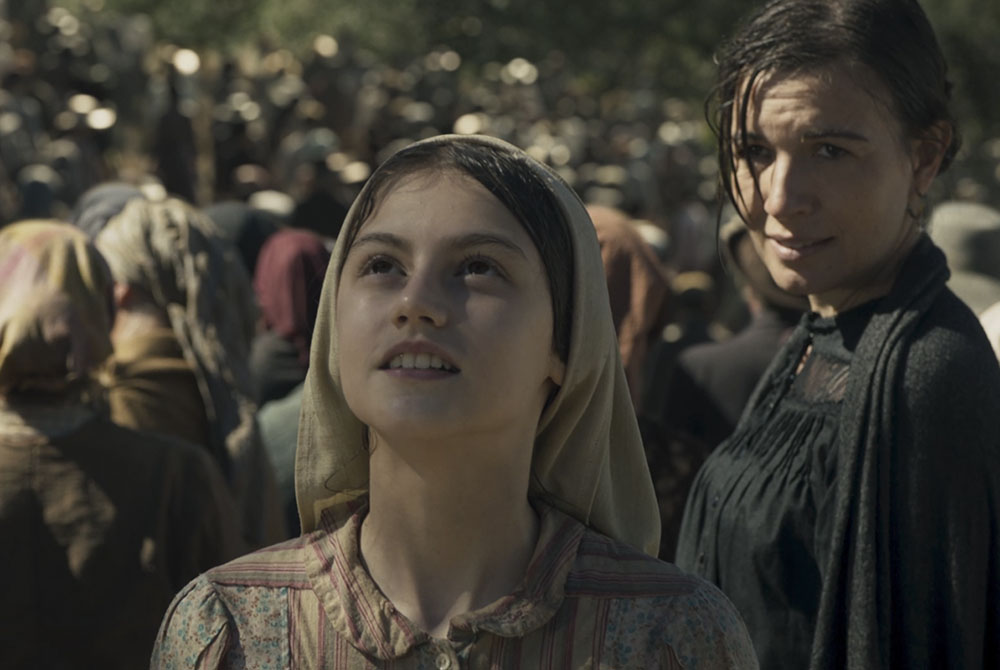 Santos closes the parish church at one point and castigates his wife for opposing him by going to Cova da Iria each month and interceding for the children when he imprisons them to be examined by a doctor. The parish priest, Father Ferreira (Joaquim de Almeida) resists the children's story at first, but then protects them. The bishop, however, scolds them and blames them for harm not only to the church's liberty in Fatima, but the whole country. He insists that Lúcia recant, but she refuses.

About 70,000 people gather on Oct. 13, 1917. Mary tells the children that she is the Lady of the Rosary and that she is going to lead the people to her Son through peace and love. Jacinta repeats these words to the crowds standing in the rain.

The film's sepia tone gives it a historical look, and the filming locations in Portugal resemble the dry, rural fields around Fatima I remember when visiting there in 1988. The film avoids sentimentality, though it spends more time with Lúcia than the younger children to capture her inner turmoil, uncertainty and faith. The production design is based on actual photographs of the crowds over those six months in 1917.

When Nichols asks Sister Lúcia, "Why did these things happen to you of all people?" she replies, "Because it was necessary to spread her message. At the time I would not have imagined the importance or the consequences, I was a child."

"Do you have any regrets?" he continues, to which she replies, "Does it look like the world has heard the message of heavenly peace? This is my only regret. I haven't done enough to please my mother." Nichols looks at her directly and asks, "Which mother?"

From the very beginning of this project, writer Nicolosi told me in an interview that she wanted to make this film about motherhood. The film succeeds beautifully in framing the story through the tensions of love between Lúcia and Maria Rosa, Lúcia and Mary and Mary with the mother and daughter.

Toward the end of the film, Lúcia looks out over the great throng of people and realizes that she, too, will be a mother of souls. There are two or three very moving moments between these earthly, heavenly, spiritual women in the film. I liked Braga's Sister Lúcia very much but I think Moniz as Maria Rosa was outstanding.

For those who may be interested in the film's accuracy, I think you will be pleased. The secrets of Fatima are included if you look closely, as are Mary's pleas to pray the rosary, to avoid sin and to do good. The supernatural visions of the story are rendered briefly and very artistically, almost like Renaissance paintings.