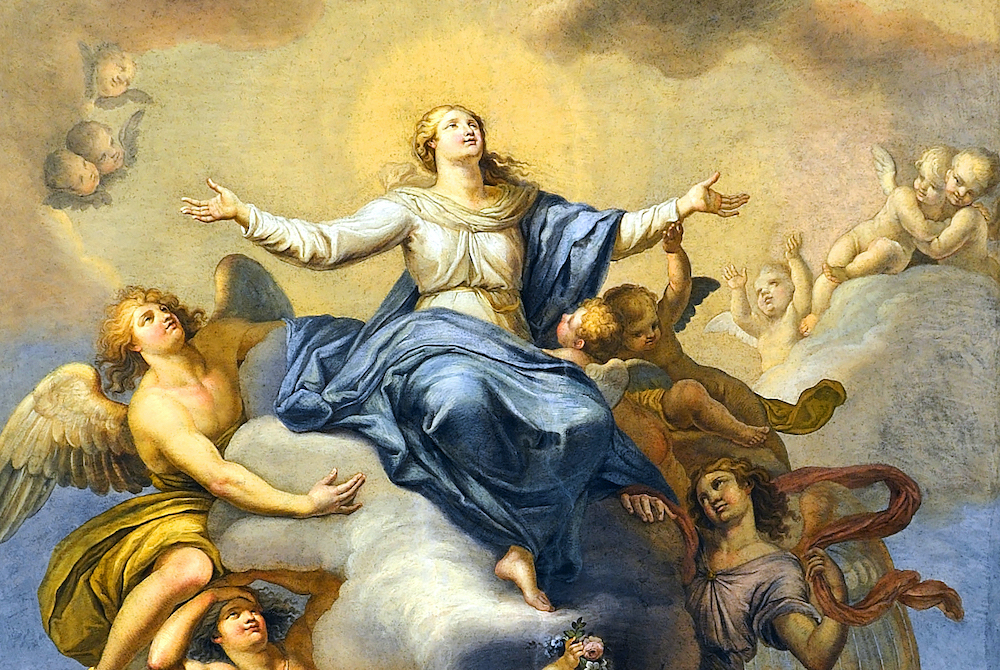 Detail of ceiling painting of the Assumption of Mary in the Santa Maria Immacolata church in Rome, 2015 (Wikimedia Commons/LivioAndronico2013)

Back in a summer that now feels like forever ago, I sauntered into an empty church in Barcelona. With the casual cluelessness of a tourist freed from constraints of having to care what day or time it is, I was startled by what appeared to be a deceased person being waked on the steps before the sanctuary. On closer scrutiny, I could see it was a statue of María laid out on a bier and surrounded by flowers. In that moment an epiphany: la madre de Jesús really did complete the course of her earthly life, and this day of my visit was the Solemnity of the Assumption.

Her ubiquitous presence in Catholic imagination and popular religious practices had in effect made it possible for me to avoid the truth that the Theotokos had indeed passed from this life into the next. Her familiar images are so scattered about the spaces of daily living that it is easy to forget. A decades-old calendar from a parish church in Puerto Rico remains taped on a closet door, each month devoted to a different Marian apparition or milagro. A Spanish tile with Nuestra Señora del Carmen hangs on a wall. Nacimientos de Navidad sit with family photos on a bookshelf, because Nativity scenes are never really out of season. The presence of Mary carries on even in our very names, across generations of mi familia: Maruja, María Luisa, Anita María, Jessica Marie, Carmen Marie and even Concepción.

In Mary, Mother of God, Mother of the Poor, Latin American theologians María Clara Bingemer and Ivone Gebara somewhat paradoxically propose that it is precisely through her assumption that "Mary herself remains in the world and within the church as someone who is living and intensely present, a living being with whom communication is possible, not only through remembrance and memory, but also through a relationship."

Seventy years ago this coming November, Pope Pius XII promulgated Munificentissimus Deus, the apostolic constitution defining the dogma of the Assumption of Mary. For centuries, the sensus fidelium recognized, in belief and practice, the glorification of her body and soul, so much so that Pius notes the "Church has never looked for the bodily relics of the Blessed Virgin nor proposed them for the veneration of the people." The dogma resulted from a global consultation initiated by the pope. In 1946, he sent a letter to bishops of the world asking what their clergy and people thought about the Assumption and whether, in their judgment, it "can be proposed and defined as a dogma of faith."

The timing of this move deserves attention. Pius XII began his papacy in March 1939, six months before the outbreak of the Second World War, and sent his letter eight months after hostilities ceased. Hints to the influences of this violent context appear early in the 1950 promulgation. "Now, just like the present age, our pontificate is weighed down by ever so many cares, anxieties, and troubles, by reason of very severe calamities that have taken place and by reason of the fact that many have strayed away from truth and virtue."

The global upheaval that marked the first decade of the papacy of Pius XII produced a veritable litany of the debasement of human dignity. Complicity and indifference abetted the atrocities of the era even at the most ordinary levels. The intentional marginalization and brutal annihilation of human beings was grounded in notions of superiority supported by anti-Semitism, eugenics and racism. The technologies of total war resulted in incalculable destruction of people and the planet, too often making little to no distinction between combatants and non-combatants. The war's aftermath brought countless displaced peoples, exacerbated tensions, new oppressions, weapons of obliteration.

In response to this degradation of human bodies and communities, defining the dogma of the Assumption was seen as a way of contributing to the benefit of society. It affirmed the goodness of the body and offered an alternative vision for a shared destiny. The expressed hope was "that those who meditate upon the glorious example Mary offers us may be more and more convinced of the value of a human life entirely devoted to carrying out the heavenly Father's will and to bringing good to others."

On this 70th anniversary, amid our own troubled times, is it worth considering what the Assumption may have to offer, or is it an esoteric antique, a day of obligation? August 2020 bears witness to a troubling litany of loss and assaults on human dignity. COVID-19 has claimed the lives of at least 165,000 people nationally, and more than 744,000 globally. Too many are counted among our most vulnerable, and how many remain uncounted because their inconvenient deaths contradict optimistic predictions of a "return to normalcy?"

A legacy of systemic racism pricks the national conscience, but a price paid in the lives of too many unarmed Black citizens at the hands of dysfunctional policing remains unaccounted for still. The memory of 23 people gunned down in a Walmart in El Paso is fresh a year later, a crime committed in support of xenophobia and white supremacy sustained by anti-immigrant and anti-Hispanic rhetoric and policies emanating from public officials. In Chicago alone, 38 children have died this year from gun violence often trapped in the crossfire of a fight not of their making. Caught at the wrong place in the worst of times, five were under the age of 10, the youngest was a 1-year-old baby.

We live in a precarious time. Broken store windows on the Magnificent Mile may garner more concern than bodies broken by violence, and statues get better protection than the bodies of children. The value of life is assessed on a utility spectrum that renders some expendable and reduces others to collateral damage or acceptable losses, in other words — "It is what it is."

In its own age, the proclamation of the Assumption challenged the logic of "it is what it is." The promulgation of the teaching on the Solemnity of All Saints offered further signs of resistance. It situated María in the vast company of a host of those who had sought to bring good to others in accord with the expectations of the reign of God. At the same time, contextualized within the days Catholics remember our dead, the Assumption affirmed the resurrection hope that death cannot destroy the bonds of love. Relationships persist.

More from Munificentissimus Deus: "Consequently it seems impossible to think of her, the one who conceived Christ, brought him forth, nursed him with her milk, held him in her arms, and clasped him to her breast, as being apart from him in body, even though not in soul, after this earthly life. Since our Redeemer is the Son of Mary, he could not do otherwise."

One way to understand the action of God in the mystery of the Assumption is to recognize it as a divine exclamation of "¡Presente!" The Assumption reminds us that "it is what it is" is not our destiny. The Assumption is an affirmation of life lived in the embrace of God's reign, of relationships honored, of stubborn resistance to erasure. In response to this mystery, we are in turn called to affirm our mutual obligations toward each other and to proclaim, with our words and deeds, ¡Presente! — for those who have passed and those whose dignity cannot and must not be erased.

Editor's note: We can email you every time a new Theology en la Plaza column is posted to NCRonline.org. Go here to sign up.