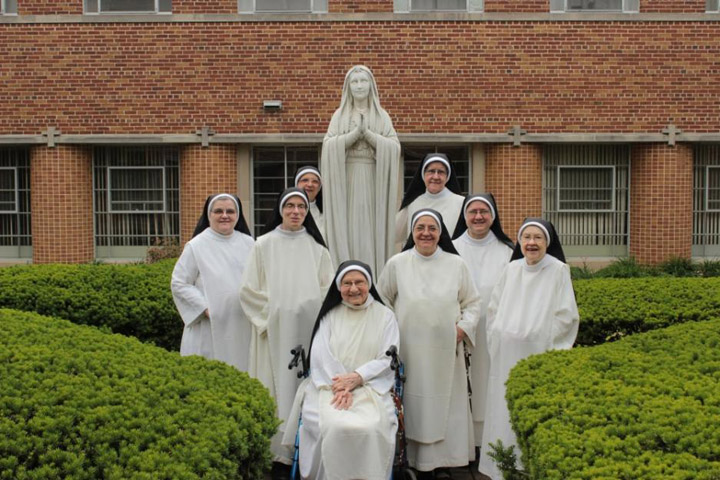 Eight of the nine nuns who are part of the Cloistered Dominican Nuns of the Perpetual Rosary in Lancaster, Penn. (GSR photo / Colin Evans)

On the Lititz Pike just outside of Lancaster, Pennsylvania, traffic thunders in a constant stream, pouring off one of the highways that merge nearby. In a parking lot set back from the road, a red brick building and 1950s-vintage chapel sit side-by-side, unremarkable in an area still notable for religious observance.

Two signs with the word “monastery” on them give the visitor an indication that this is the home of Lancaster’s Cloistered Dominican Nuns of the Perpetual Rosary.

Since 1952, when the monastery was built (though the nuns have been a presence in the Diocese of Harrisburg for 90 years), religious women have resided behind these walls. Their mission is not only a special devotion to the rosary, but a commitment to incorporate the needs of the world into their prayers.

In 1880, Dominican Fr. Damien Marie Santourens, a great promoter of the perpetual rosary among the laity, was inspired to found a new order of the Dominican sisters.

Once there were more than 20 nuns residing in the two-story Lancaster monastery. Now there are nine, ranging in age from 60 to 89. Though some women have sought them out and even discerned a calling to religious life, it has been many years since they received a new postulant.