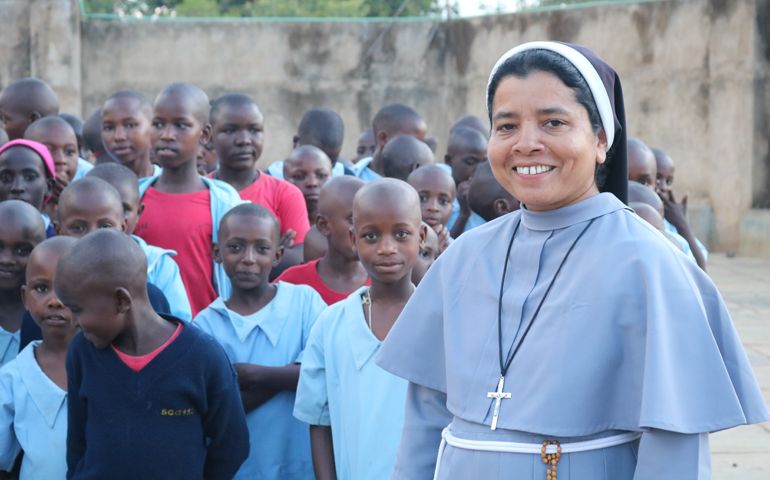 Sr. Lilly Manavalan, a nurse, from the Franciscan Clarist congregation at St. Clare School in northern Kenya on May 1 (Doreen Ajiambo)

Samburu, Kenya — When the sun rises in this remote region of northern Kenya at 6 a.m., it is a new dawn for Missionary Sister Lilly Manavalan. Her day starts with a trek for over an hour across a deep valley to reach the streets where she can find vulnerable children living with HIV.

On a normal day, she takes two children who have lost their parents and are themselves infected with the virus to St. Clare Girls' Centre in Nchiru, Kenya, where she gives them a home with love, and a future with promise while offering them a new beginning in Christ.

"This is my passion and I really like being with the poor people," said the Franciscan Clarist nun. "I feel very happy and satisfied when I assist the poor, especially those suffering from HIV/AIDS."

Manavalan, who is from Kerala state on the southwestern Malabar Coast of India, is a nurse at St. Clare Centre. She has passion and resilience to help impoverished people, many living with HIV. She developed the desire to work in northern Kenya after her colleague informed her that many people in this part of the world had no knowledge about HIV, AIDS or sexual health, she said.

The Northeastern Africa nation's 2014 HIV and AIDS Stigma and Discrimination Index shows that 98 percent of people living with HIV in this region do not have close ties with their families. The report also indicates that 83 percent of the residents believe that people who are HIV positive are punished by God for bad behavior, while 72 percent believe that the virus is spread by sex workers.

Manavalan came to Samburu in 2009 specifically to help those suffering from bias related to HIV/AIDS.

"I have committed to address stigma and discrimination," said Manavalan. "I realized that many do not know how HIV is spread and do not believe they are at risk. Others don't want to associate with anyone living with the virus."