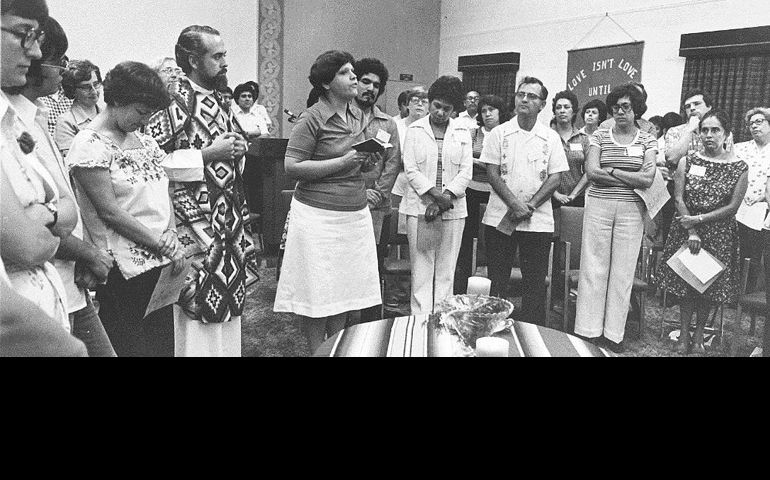 Ada María Isasi-Díaz, center, leads part of a meeting for Las Hermanas in this undated photo. (Courtesy of Center for Mexican American Studies and Research Collections, Our Lady of the Lake University)

Dolores Florez, 75, was skeptical the day she walked into a Las Hermanas retreat in Colorado Springs, Colo. A divorce after 24 years in an abusive marriage had left her bitter and depressed. But her friend Celia Vigil persisted.

Florez told her friend she didn't want to pray; she just wanted to be left alone.

"I was angry at God," Florez said. But eventually, she agreed to go.

"Las Hermanas really helped me to change my life and to give me back my dignity -- to recognize my dignity and my worth as a Hispanic woman."

Las Hermanas, which means "the sisters" in Spanish, pushed to end discriminatory practices in the Catholic church, especially toward Latina Catholic laywomen and nuns.

Starting in the early 1970s, the organization founded by two women religious worked to increase educational and leadership opportunities for Latinas, advocated for more Latino bishops, exposed racism and fought for the right to work with Hispanics. Las Hermanas also played a pivotal role in the foundation of the Mexican American Catholic College in San Antonio that offers bilingual degrees in pastoral ministry.

"They not only mobilized women religious; they partnered with women in general, with Mexican-American Latina women who were on the front lines of social change in the late '60s, early '70s," said Arturo Chávez, 53, president of the Mexican American Catholic College. "They were also important voices for change in the educational systems that they were a part of."

Mother Tekla: the most powerful woman in Rome

Immigrants from Myanmar hope for papal message of compassion