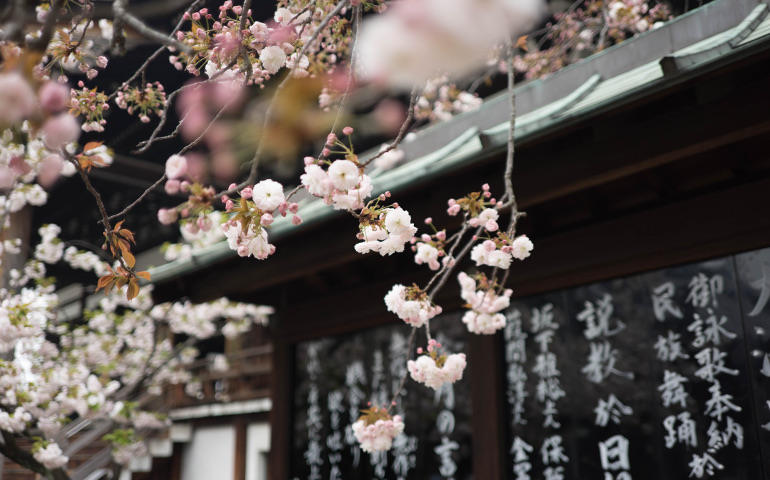 In his book-length interview A Big Heart Open to God, Pope Francis said: “Religion has the right to express its opinion in the service of the people, but God in creation has set us free: it is not possible to interfere spiritually in the life of a person.” Francis was speaking of the need to affirm the teaching and practices of the church (“religion” in his quotation) but not to the extent of intruding with a presumptuous spirit on the immediacy of the relationship of a person to God.

We can also see here one of the pieces of spiritual logic behind the high value Francis puts on conscience — conscience as the place of immediacy where we are “alone with God” — in light of the teaching of the church. As Francis said in Amoris Laetitia: “We are called to form consciences, not to replace them.”

But we can also see here the logic behind a central theme of Shusaku Endo’s remarkable novel (and Martin Scorsese’s outstanding film) Silence: To what extent is there a distinction between understanding Fr. Sebastien Rodrigues, the so-called apostate priest and the central character of the novel, as a son of the church or as a child of God?

In the terms of the church of his day, to step on the fumie was to commit apostasy and Rodrigues should be judged harshly for it. But in terms of the subtle distinction that Francis draws between religion and “God in creation setting us free,” we are invited more generously to consider Rodrigues’ act in light of a conscience upright before God — even if condemned by the church.

Moreover, I think in what Francis says about the distinction between religion and God in creation, we also see the roots of the difficult problem of the inculturation of Christianity in Japan that haunted Endo. It was not so much that Endo thought Christianity was inherently a bad fit for Japan — or, in the words of the novel, that Christianity was a sapling destined to die in the “swamp” of Japan.

Who hasn’t thought that God can be agonizingly silent? Silence is a masterpiece of the examination of this reality of the human condition. The work drives us toward a two-step consideration of the silence of God and, in the end, toward a recovery of faith in a new dimension. On one hand, the incarnational theology of Endo’s novel prompts the reader to move from searching the heavens for the demonstrable power of God to hearing the divine voice in the anguished heaves of Japanese peasants hanging in the pit.

In this movement, Endo follows the great trajectory of specifically Christian faith, which is not oriented toward contemplative abstractions but is disposed to the sensory reality of the concrete world. St. Paul was knocked off his horse. But he didn’t understand who did it until he was told that the Lord of blinding light was the same Lord present in the first Christians whom Paul was persecuting.

Augustine’s great moment of change in the Confessions occurs when he moves from Platonist abstractions about the Word to Christian particulars about a God who lies as a helpless infant at his feet. Pope Francis in “Laudato Si’, on Care for Our Common Home” has invited us to hear the cry of the poor and the cry of the Earth.

Rodrigues’ story in Silence can be understood similarly. In the decisive moment of the novel, as he demands that God’s powerful voice resound through the silence, he instead hears the Christians in the pit and recognizes the voice of Christ inviting him for the sake of love to step on the fumie.

But Endo’s novel also points us toward a second step in thinking about the silence of God. Here, the Sri Lankan Jesuit Fr. Aloysius Pieris, the founder of Asian liberation theology, provides a helpful idea. Pieris argues that, in the Asian theological context, speech and silence are not understood as opposites. It is not as if speech is abundance and silence is deprivation.

Instead, it is more accurate to think of speech and silence as mutually implicating. “All words have silence as their source and destiny,” Pieris said. The incarnational theology of Silence invites us to hear the voice of Christ in the poor, in our neighbors, in the Earth. Pieris’ observation about the interdependence of speech and silence invites us to move from the sequential to the sacramental: from the passage of time as words slip into silence to the presence of meaning as wisdom emerges from the mutuality of word and silence.

If there is one flaw in Endo’s brilliant novel, it is the largely unarticulated presence of what was surely a powerful force at play in the persecution of Christians in early modern Japan: the fear and jealousy of the state threatened by Christianity. As the story proceeds, Inoue, the lord of Chikugo Province and magistrate of the Nagasaki area, devises the insidious, torturous process by which Rodrigues is brought to the point of stepping on the fumie. But Inoue’s motive is cast mostly in the terms of religion and culture, not in the terms of the preservation of political power. After all, Christianity, he said, cannot survive in the swamp of Japan. Moreover, what is crucial about Inoue’s sense of the swamp is the way in which the Christian notion of a transcendent God is constantly dragged down to become little more than a divinity that is an extension of the collective humanity of the Japanese.

The novel does not sufficiently evoke the fearful, jealous way in which Inoue as a political ruler would act to protect the power of the state. No doubt behind such jealousy were concerns about European imperial power — a power with which the church was then in many ways allied. We cannot underestimate the challenge posed to a ruler like Inoue by the Christian notion of a transcendent God, sovereign in power over all things — including over Inoue.

But what is the nature of that sovereign power — and how does Inoue understand it? Japanese Jesuit theologian Ichiro Mitsunobu has recently argued that “when the Japanese become aware of the unhealthy relationship between religion and political power which has dominated its history then, and only then, will people be able to transform the powerlessness of religion so that the true image of the God of Jesus Christ may truly flourish.” Mitsunobu notes how during the time of Inoue (a real historical figure), the shogunate both suppressed Christianity and subordinated Shinto and Buddhism in order to make both religions of the state.

Mitsunobu’s argument provides a helpful framework for considering Silence. In the novel’s final, dramatic scene, we see the limits of Inoue’s cunning reach. He cannot imagine salvation being offered as much to the weak as to the strong. Thus, he cannot imagine an unconditional divine grace that stands always ready to gather in the so-called failures and apostates like Rodrigues and Kichijiro. Inoue is confounded by such gratuity and feebleness, which seem unworthy of the respectability of the world of religious and political power.

But, of course, the genius of the novel points toward the possibility of the redemption that always beckons: What is most sovereign and transcendent about God is not demonstrable power but indestructible, merciful grace that is the ground of the dignity of every person. Christ, the powerless and broken king, can neither be controlled by the lord of Chikugo nor by the princes of the church. God in the Spirit has set him free.

Question from Faith Stripped to Its Essence: A Discordant Pilgrimage Through Shusako Endo’s Silence by Patrick T. Reardon (ACTA Publications, 2016):

Inoue thinks the young priest is deceiving himself about his decision to step on the image of Jesus. Rodrigues recognizes that the magistrate may be right. In his heart, though, he tells Jesus that his faith is different now but that his love for the Lord is still strong. What do you think? How do you feel?

[David DeCosse is on the staff of the Markkula Center for Applied Ethics at Santa Clara University. He taught for the 2016 fall semester at Sophia University, the Jesuit university in Japan. You can read more at NCRonline.org/feature-series/letters-japan.]