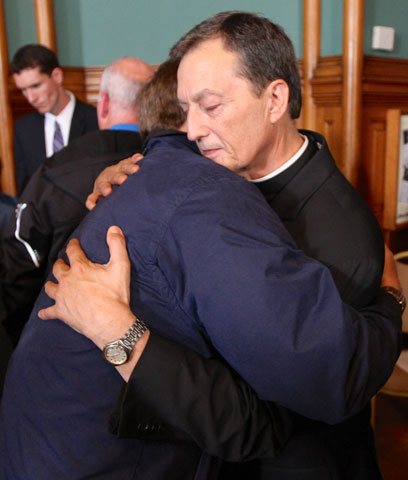 Fr. Charles Lachowitzer, moderator of the curia and vicar general in the St. Paul-Minneapolis archdiocese, hugs an abuse survivor after a news conference to announce a settlement in St. Paul, Minn., on Oct. 13, 2014. (CNS/The Catholic Spirit/Dave Hrbacek)

"Having the horror heard helps to heal the hurt." My stepmother, Dot, shared her wonderfully alliterative mantra with me years ago as we pondered the benefits of a person going to a counselor when stuck in pain. In her wise and eye-twinkling way, Dot — whose husband had been struck by a car and killed many years before, leaving her with 12 children to raise — was telling me how she had survived.

After my mother died suddenly from brain cancer at 64, my father, Tom, was traumatized with grief and seemed to be on his way "out of the picture," as he used to say of others who had died. One of my nine sisters, Kate, challenged him to get up and start living again. "Because at least you had a life before Mama, but we never did," she reminded him. My father not only started to live again, five years later he married Dot. Between the two of them — Dot with her 12 kids, and Tom with his 14 — they had 26 mostly grown children. Talk about having the horror heard!

Dot's mantra shows how she understands people getting over the pains of life. They need to be heard. If someone is willing to listen to the horrors that befall us, it feels like we are not alone. We can bear it and even find meaning in it. As St. Paul wrote to the Galatians, "Bear one another's burdens and so you will fulfill the law of Christ."

I believe this is one of the keys to understanding and healing the sexual abuse wounds in the church. It isn't that people are just looking to bash the church, or that they want to wallow in victimhood. They desperately need to be heard so that the hurt can be healed in God's way. When I experienced this phenomenon recently, Dot's almost hokey way of describing our primal human need came back to me.

At first I had resisted the invitation. The "Circle of Healing" would be dealing with the clergy sexual abuse crisis and cover-up in the Catholic church. Even though this gathering would take place in a beautiful, sunny, comfortable living room of someone's Victorian home in Philadelphia, I wondered what the real agenda was. I knew the facilitator who had invited me, a former member of my religious order's novitiate class over 50 years ago, and I trusted him. But as one of perhaps only a few priests participating, would I be a target for the anger of any survivors of abuse there? Could I really listen to all of their grief on a Saturday from 9 a.m. to 5 p.m.?

I phoned my friend and shared my fears. As a former director of the Voice of the Faithful organization, he assured me that it would be a safe process, one where all 12 participants could get in touch with the feelings we have about the crisis. This would be an opportunity for me to share my own feelings as well — but only what I felt comfortable sharing — and listen to other Catholics who have been struggling to be faithful to the church.

A few survivors of sexual abuse by priests would be present. The goal was to provide an opportunity to begin healing — not necessarily forgiveness — to whatever extent this grace came to each participant. It would even help the church as a whole, he said, in this small step of faith taken by some of its members. Yet, who heals the priests, I thought? Even though still wondering about what I would feel safe sharing or hearing, I decided to attend.

It turns out that I was helped in my own healing process. First by being welcomed as a person, not so much as a priest who represents the organization in which the abuse occurred. Like everyone, I was invited to be present and speak as one who has his own unique history with the church.

As the "talking stick" was passed around, I began to feel my two-sided experience of the abuse and cover-up crisis. First, I have my own personal spiritual-sexual journey with its joys and wounds, including experiences long before I became a priest on up to the present. Second, as a priest I am in a position of authority in the church, even one of "them." I realized that I needed to express and receive forgiveness on both of these levels — if I felt safe doing so. Surprisingly, I felt this safety — almost like I had "come home" — as each participant spoke so honestly about themselves. There was no "cross talk" after each person took a turn speaking, but I could sense in their listening the love and respect they had for each other and for me.

Most of all, I discovered that I needed to hear the stories of the group's three survivors of sexual abuse. I wanted to see their faces and to hear their pain, their sense of betrayal and anger at their church leaders, even if this was in a way that included me. Each of their faith journeys was astounding, even more their continued involvement in the church. I came away with more hope for the church. Our people are stronger in their faith than we may think.

Yet, more than my own experience of this Circle of Healing, it seems important to recount the words of one of the survivors. Jim had wept at times when he spoke, and I reconstruct what follows from conversing with him afterward. He has graciously granted me permission to publish this so it might help others.

As a victim of clergy abuse, one often wonders why you were picked. Why did Father pick me? He was the assistant pastor in charge of the altar boys. Sadly, he had access to many boys. I know there were others. How many I have no idea.

One of the participants mentioned choosing vulnerable kids and I was certainly one of those. Growing up in an alcoholic family was extremely difficult. When I was 8, 9 and 10, I was often awakened by my parents arguing one floor below. It was so loud and frightening that I would hide in the bedroom closet with a pillow held over my head. I prayed to God for the fighting to stop. It never did. After a while I stopped praying.

When I was 11, a group of boys were playing in a wooded area near our homes. One of the boys decided he needed to relieve himself and peed against a tree. Another boy followed.

One of the boys who was there lived across the street from me. He was an only child. I don't know what he told his mother but when I got home, I was sent to my room.

When my father got home, I was beaten for almost an hour on my bare backside with a belt. I refused to admit I had peed in the woods because I had not. At one point, I remember my father saying he was going to beat the queerness out of me. I was an 11-year-old Catholic kid. I had no idea what he was talking about.

It took me years to realize that the beating had nothing to do with me. My father was beating his own demons.

Less than a year later, I was molested by a Catholic priest. How did he molest me? By trumping up a false charge and spanking me on my bare backside. Coincidence? I think not.

When I was in seventh grade, the priest who molested me gave a class on the birds and the bees to the boys in my class. Someone was writing four letter words on the blackboard between classes. So, they decided to have a sex talk. Father didn't talk about pedophilia or how some people get a kick out of spanking little boys.

What can you say to this man? During the day of sharing I felt myself avoiding his glance. And yet I wanted to reach out to him, but how? A hug could be dangerous I thought, given his history. So, I sidled up at a coffee break and thanked him, yet didn't shake his hand. This mix of feelings — a paralysis even — is what stymies the church from offering any system-wide approach to healing for our people. Anything the clergy does will be suspect. So, we hire lawyers to keep ourselves safe and it all winds up being tried in courts. But has anything really been reconciled by this?

I believe that a way for the church to move forward and build trust again — possibly discover forgiveness in God's time — is through these Circles of Healing. But this model by itself is too small, with too few able to be helped. Somehow we've got to magnify this experience of healing for the church as a whole. Some brave bishops need to participate in this process.

What would be crucial to be determined ahead of time is confidentiality. For example, would anything the bishops heard or said be grounds for legal claims and issues? It is daunting to even think of these issues and potential complications. But if we do nothing, we remain in the present model -- most of it reduced to court cases and settlements, jail sentences, no real reconciliation, and the church locked in a "no trust" path. Surely something can be done differently. A Circle of Healing could be a start.

If we are willing to listen to each other's pain and sense of betrayal, we may begin to heal and discover our awesome ability to set each other free. Having the horror heard helps to heal the hurt.

[Augustinian Fr. Paul F. Morrissey is the author of The Black Wall of Silence.]

A version of this story appeared in the Dec 2-15, 2016 print issue under the headline: Sharing stories of sexual abuse 'helps to heal the hurt'.