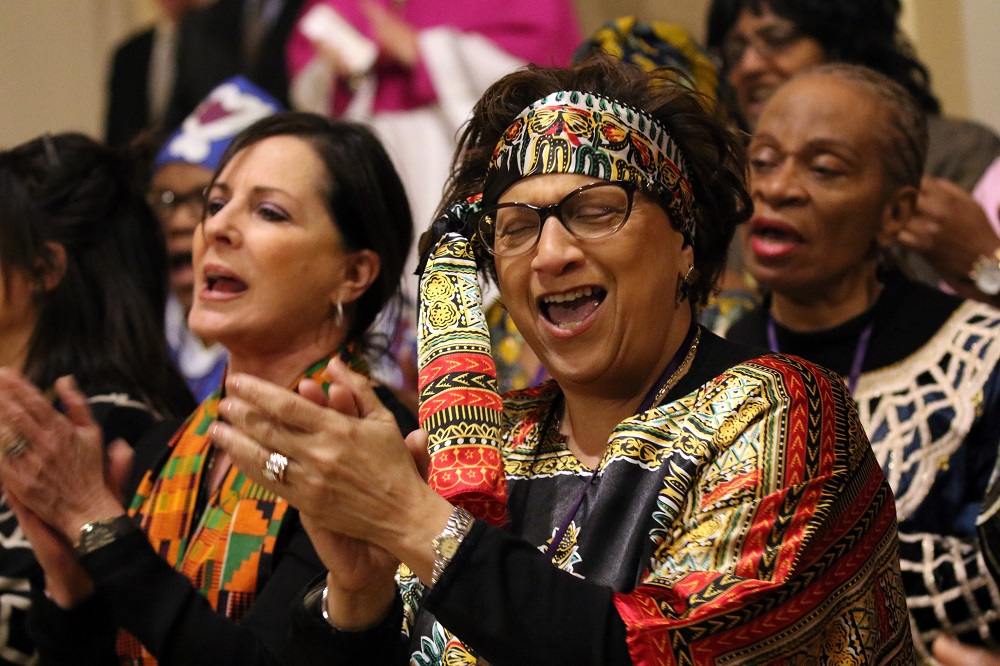 Women with the Sister Thea Bowman Choir of the Diocese of Rockville Centre, N.Y., sing during a prayer service April 4 . at St. Agnes Cathedral in Rockville Centre. "(Jesus) wants us to be saints and not to settle for a bland and mediocre existence," Pope Francis wrote in his new apostolic exhortation on holiness, “Gaudete et Exsultate” (“Rejoice and Be Glad”). The document was released April 9 at the Vatican. (CNS/Gregory A. Shemitz, Long Island Catholic)

Parishes and individual Catholics will find much wisdom in Pope Francis' new exhortation Gaudete et Exsultate ("Rejoice and Be Glad"), a document many say is practical, accessible and applicable to the challenges in today's U.S. church and society.

Calling it "one of the most important magisterial documents on holiness since Vatican II," Chicago Cardinal Blase Cupich said the pope has given Catholics an accessible "guide to holiness" that "urges us in a very practical way to cultivate a disposition of mercy toward the other."

In particular, he hopes the document's section on the Beatitudes would be adopted in church programs for adults and young people alike, from parish study groups, to RCIA, to marriage preparation.

"Just as his reflection on 1 Corinthians in Amoris Laetitia offers practical insights for married couples and those preparing for marriage, so now a meditation on the Beatitudes in Gaudete will prove to be an enormously rich resource for Catholics at all stages of faith formation," Cupich told NCR in an email interview.

Those who work in lay ministry, religious education and pastoral care in parishes and dioceses agree the document will be useful in their work, especially when they encounter "push back" from Catholics who see faith only as intellectual assent to a series of beliefs.

Instead, in Gaudete et Exsultate, released April 9, the pope stresses the importance of both prayer and action — specifically mentioning the plight of migrants — in discernment toward holiness that goes beyond merely following rules.

That will be useful to Dominican Sr. Terry Rickard, president and executive director of Renew International, who sometimes sees polarization around what it means to be holy when she visits parishes to promote small faith-sharing groups.

For example, some parishioners challenge her for bringing up issues about immigrants and refugees. "This exhortation gives some strength to say that's part and parcel of our faith," said Rickard.

"That's really helpful because, before Francis, there was really a push about doctrine — you had to get it right," Rickard said. "What he's saying is we need right living, too. It's about contemplation and action."

She believes the authenticity that is reflected in that approach is especially important for ministers involved in adult faith formation who help prepare people to live their faith in the world.

"To those of us who are pastoral practitioners, we need to pay attention to this and ask how we are going to get this out to people," she said.

One parish plans to use Gaudete et Exsultate with young people, for evangelization to "returning Catholics" and in a new program that aims to address polarization in the church and society. 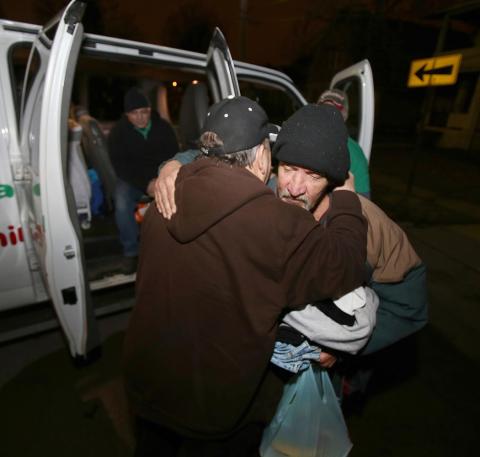 Deacon Joe Bourgeois hugs a homeless man after giving him food in Cleveland Feb. 28. In Pope Francis' exhortation, "Gaudete et Exsultate" ("Rejoice and Be Glad"), the pope says that the path to holiness is made up of small steps in prayer, in sacrifice and in service to others. (CNS/Bob Roller)

"This would be a great document for putting us all in the same room and helping us come together," she said.

Lee also hopes the pope's words, which seem to imply a more "seamless garment" approach, could help integrate the prolife and other social justice ministries in her parish.

"Defense of the unborn is something that we're not going to compromise on, but at the same time we need to go beyond the bioethical issues and look at things like refugees and immigrants and those who are already born," she said.

Cupich also praised how Francis connects life issues to holiness in the exhortation. "Working to strengthen this seamless garment of human dignity through a consistent ethic of solidarity is not just another political agenda but the very path to holiness we are called to walk," he said.

Other parish ministers found Francis' approach to grace inspirational and applicable in parish ministry — especially his warning against an overemphasis on knowledge and rules, which makes the church "a museum piece."

"When somebody has an answer for every question, it is a sign that they are not on the right road," the pope wrote.

One director of religious education immediately thought of the "Religion Bee" in her diocese, which reduces faith to rote memorization in an academic competition.

That attitude also can infect RCIA programs, some of which even give written tests, said Nick Wagner, co-director of TeamRCIA, a San Jose-based training organization for those involved in ministry to catechumens.

"Sometimes we slip into Catholic teacher mode and want to teach the facts of Catholicism," said Wagner.

The pope's new exhortation "can encourage RCIA catechists to think bigger and challenge seekers to really live into the mission of the gospel," he said.

Of course, part of RCIA involves teaching doctrine, he said. "But the pope says when we do that too much, we domesticate the mystery," Wagner said. Catechists have to "give a profound sense of the mystery of Christ. I have not found that in a textbook, but in the mystery of our lives." 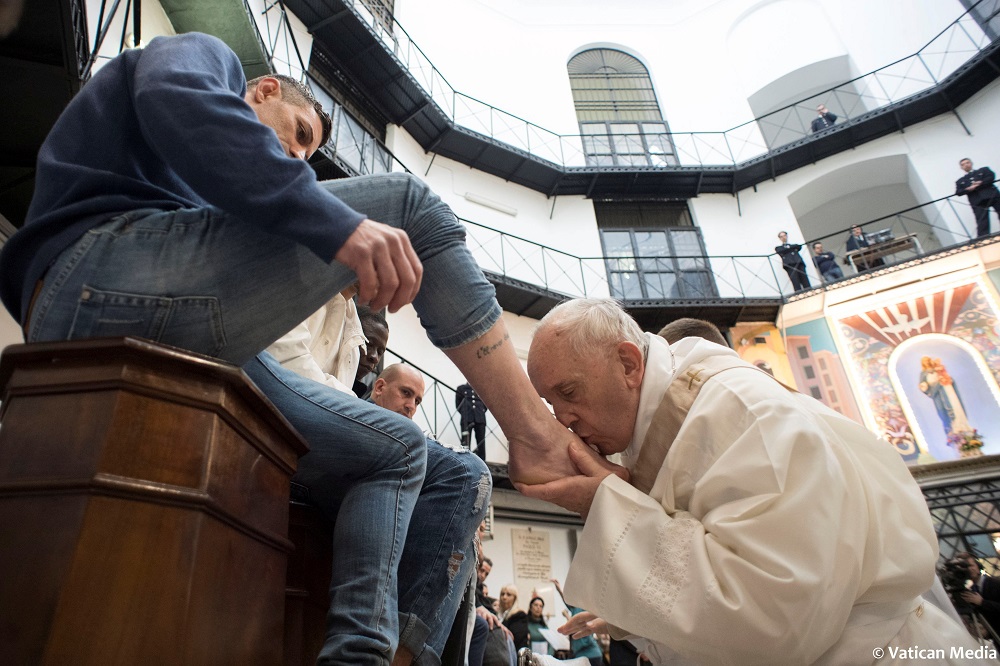 Pope Francis kisses the foot of an inmate during Holy Thursday Mass March 29 at Regina Coeli prison in Rome. "Christian wisdom can never be separated from mercy toward our neighbor," the pope wrote in his apostolic exhortation, "Gaudete et Exsultate" ("Rejoice and Be Glad"), released April 9. (CNS/Vatican Media)

In Gaudete et Exsultate, Francis also warns against the temptation to equate holiness with living correctly. In RCIA, "we have to recognize the holiness in the seekers who come to us," Wagner said. "And through discernment with them, [we can] help them discover their own path to holiness, not my path to holiness I'm imposing on them."

In that spirit, he wouldn't necessarily require RCIA teams to read and study the pope's exhortation, but rather explore its spiritual meaning in a retreat setting, perhaps focusing on the Beatitudes.

"They're not just a trite list of nice quotes, but rather a countercultural way of living the world," he said. "If we really live the Beatitudes, it brings dignity to all human life, especially those areas of human life that are most disregarded."

Although people in her parish may not use the word "holiness," they are hungry for the spirituality described in Gaudete," said Joyce Mennona, director of religious education and pastoral care at the Parish of Resurrection-Ascension in Rego Park, New York.

"Pope Francis is stressing the importance of balance," said Mennona. "We have to be mindful and prayerful to develop a relationship with God, but we also have to go out and evangelize, feed the poor and help a child in need."

She called the document "refreshing" and hopes to use it in small groups in the parish, especially for catechists to remind them that too much focus on dogma and rules can impede sharing a love of scripture, Eucharist and community. As someone who is criticized for not always following the rules — such as the time he married two flight attendants on the papal plane — Francis understands this, Mennona said. 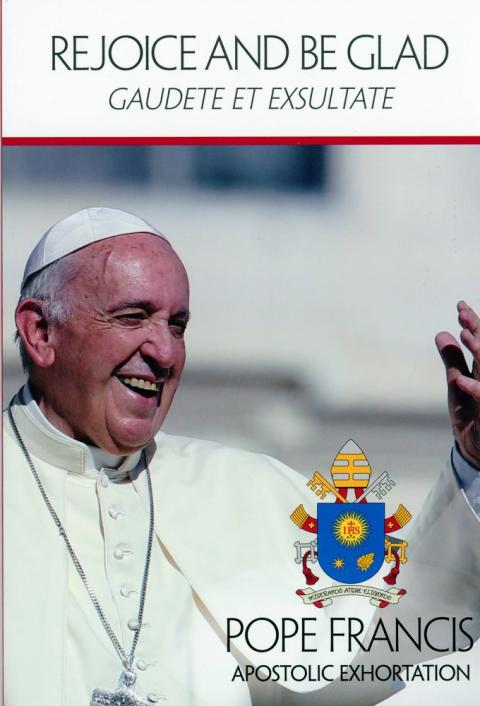 The cover of Pope Francis' new apostolic exhortation, "Gaudete et Exsultate" ("Rejoice and Be Glad"), on "the call to holiness in today's world," released at the Vatican April 9. (CNS)

Most Catholics know the rules of Catholicism but are hungry for the kind of holiness Francis describes in Gaudete et Exsultate, said Marti Jewell, associate professor of pastoral theology at the Neuhoff School of Ministry at the University of Dallas.

"Vatican II recognized the personal call to holiness of all the baptized, but I'm not sure we know how to talk about holiness," she said. "Pope Francis is offering a much needed and expanded view of what holiness really is, as well as ways of living it out."

Holiness is not just for saints, clergy or religious, and it's not about perfection, the pope says in the exhortation. But his words may challenge Catholics to expand their views of holiness, Jewell said.

Perhaps not all Catholics will read the entire document, Jewell said, but they will get excited when they hear the pope's down-to-earth description of holiness, which, after all, is quite traditional.

"It's not sensational," Jewell said. "It's the opposite: It's real and practical and everyday. That's what we need to pay attention to."

This story appears in the Gaudete et Exsultate feature series. View the full series.
A version of this story appeared in the May 4-17, 2018 print issue under the headline: A practical guide to holiness. 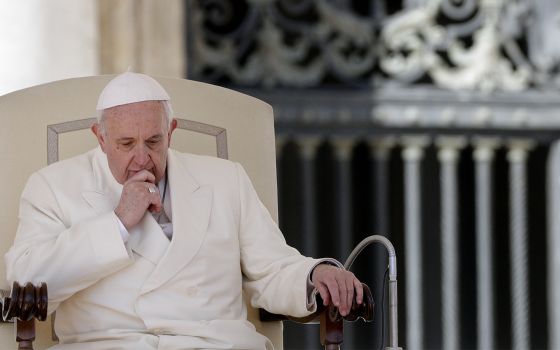 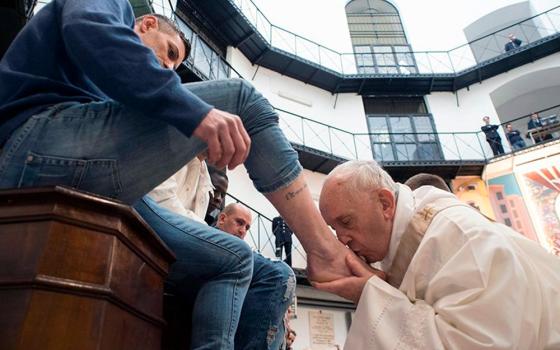 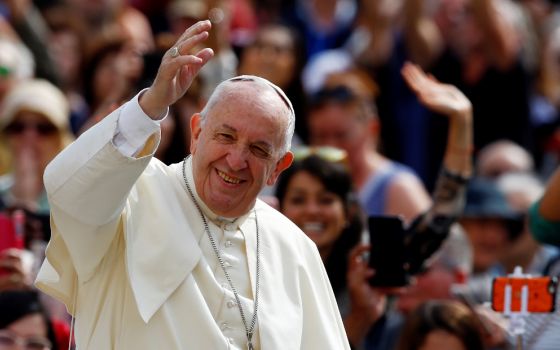 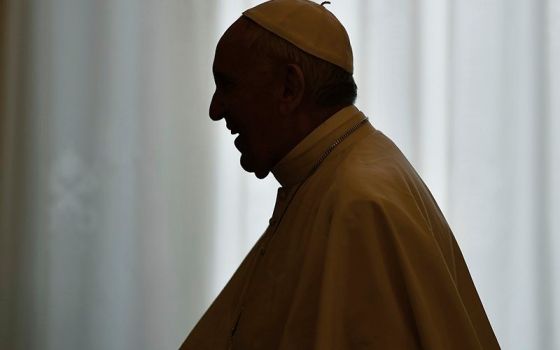