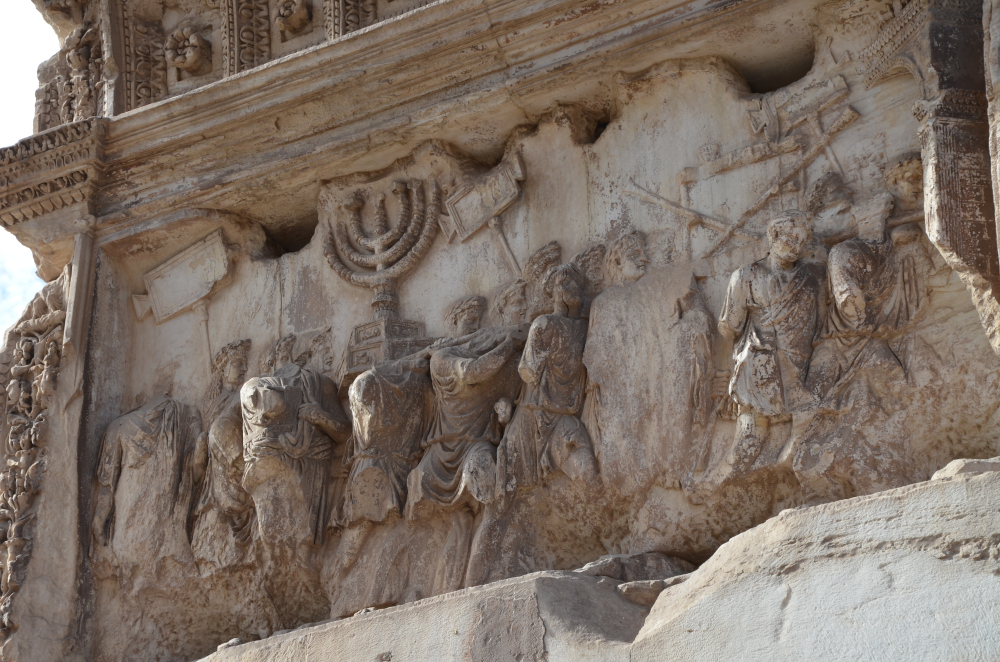 A relief on the first-century Arch of Titus in Rome depicts a triumphal procession with spoils from the destruction of the Temple in Jerusalem. (Wikimedia Commons/Carole Raddato)

Some months after 9/11, I asked one of my Romanian friends how people in her country, people who had lived through five decades of communist repression, interpreted the attacks. She said they found it terribly frightening, reasoning that if that could happen to the United States, nobody in the world is safe.

I was taken aback to realize how our vulnerability reverberated across the globe. I remembered that conversation while reading Jesus' prediction of the destruction of the Temple in today's Gospel.

Jesus and his people saw the Temple as the sign and locus of God's presence on earth. The crown jewel of Judaism, Herod's rebuilt temple wasn't completed until A.D. 64, just six years before the Romans razed it and killed thousands of Jews while wiping out a rebellion.

Because the Temple symbolized God's presence and the stability of their faith tradition, Jesus' prediction that "the days will come when there will not be left a stone upon another," must have sounded like the end of the world. In typical fashion, when the disciples asked when all this would happen, Jesus circumvented the question by putting it in a larger context.

Jesus' response to questions about the end can be summarized by his first six words: "See that you not be deceived."

Jesus warned his disciples that after they experienced serious persecution, imposters would try to undermine the faithful. Violence and war, natural disasters and cosmic omens would terrify the people. The disciples themselves would be betrayed and brought before tribunals.

Jesus' conclusion? "Don't worry. Don't even try to prepare yourselves, because I myself will give you wisdom. By your perseverance, you will secure your lives."

Jesus and his companions lived in a precarious world. Simple infections and childbirth were often fatal and Rome cared little about how many non-Romans lost their lives when rebellions needed to be suppressed. There was no such thing as insurance or weather predictions to reduce the dangers of accidents or natural disasters.

If Jesus had to warn people of his time against false securities, how much more the 21st-century citizens of the wealthy nations of the world?

At the end of the church year, our liturgies call us to consider our mortality and the fragility of everything we create and might be tempted to rely on. That's an immensely countercultural task. Contemporary Western society tries to hide all signs of weakness. The purveyors of cosmetics and pharmaceuticals all but promise to prevent the effects of aging. Our consumerism is a barely disguised flight from reminders of death's invincible power.

Jesus warned his disciples about upcoming persecutions and the demise of the Temple to strip them of the empty optimism and self-centered ambition that could detour them from reliance on God. His task might not have been as difficult in the first century as it is today.

Ours is a socially and psychologically precarious epoch. We have lived with the threat of atomic warfare for 74 years. As people of color and women progress toward attaining their inherent social equality, those who must make room for them can feel threatened. Some of us take our anxieties out on new immigrants by reenacting the prejudice and persecution our own immigrant ancestors faced in centuries past. The technological age is turning the globe into a neighborhood and the internet can expose secrets once hidden to all but those closest to us.

This may not be the end of the world, but everything we thought we understood is changing faster than we can comprehend. Our situation is strangely similar to what Jesus described in today's Gospel.

The terrifying reality Jesus had to face for himself and proclaim to his disciples is that we are mortal and our institutions are impermanent. In response to that, the prophet Malachi calls us to "fear of the Lord," the awe-filled faith that God is mysteriously greater than all the forces that threaten us.

Jesus told the disciples not to worry because he would be with them. We can't stop the change and we shouldn't allow false security blankets to deceive us into ignoring the crises of our times. The Gospel tells us that we can accept today's crises — from the personal to the cosmic — as God-given occasions of grace and opportunities to give witness. Christ promises to be with us, if we will only rely — or rely only — on him.

A version of this story appeared in the Nov 1-14, 2019 print issue under the headline: A world of disorder.