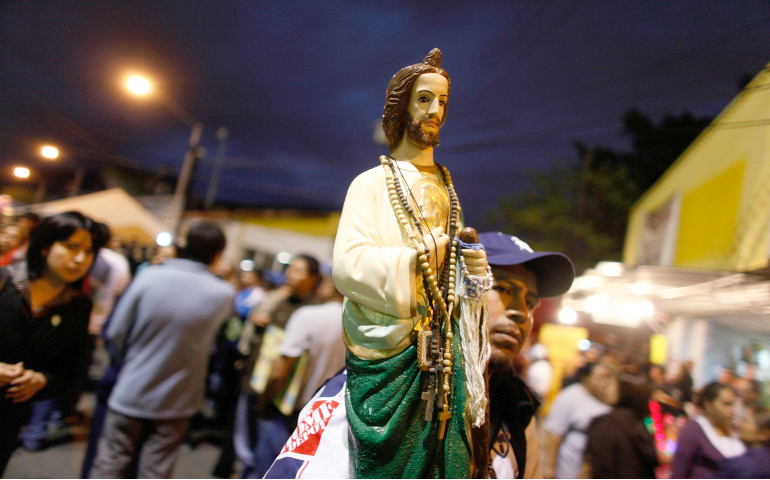 A man carries a statue of St. Jude outside a church in Monterrey, Mexico. (CNS/Reuters/Tomas Bravo)

Cait Dohmeier clutches the silver medal that dangles from her neck, moving her thumb along its raised surface to outline the face of St. Dymphna. She uses the token, a souvenir she bought in 2007 from a street vendor in Paris, to help her through bouts of anxiety.

Today, like most days Dohmeier calls on her, St. Dymphna intercedes and a calm comes over her.

Dohmeier, 26, a store clerk who lives on the Southside of Chicago, said she chose Dymphna, the patron saint of mental health, as her confirmation saint in 2005. She has since called upon her to relieve her panic attacks that stem from family issues.

"As a kid, my parish was not the most understanding when it came to my mental stability and some of the things going on in my home life," Dohmeier said. "Having someone who was young and had similar father issues as I did, to be there as someone to receive my prayers when I couldn't direct them to God … having someone to act as an intermediary really saved me and my faith."

Dohmeier, who hasn't spoken to her father in 13 years, said she relates to St. Dymphna, who also had a strained relationship with her own father, so the story goes.

Dymphna, the daughter of a pagan Irish king, fled to Belgium when her father began an incestuous longing for her, according to writer Robert Ellsberg's 2016 book, Blessed Among Us. Dymphna's father later found and murdered his daughter in Gheel after she refused to return home with him. A shrine has been dedicated to Dymphna in the city, where she is said to have cared for the sick and the poor.

In two of the polls posted on Aug. 22 and Aug. 26, more than 100 people responded — including Dohmeier — to the question, "Who is your favorite saint and why?"

Among the favorites were Sts. Francis of Assisi, Padre Pio, Anthony of Padua and Jude Thaddeus. A recurring theme arose among the motives: Saints were everyday people with everyday flaws — and, therefore, relatable.

NCR reached out to some of the respondents to find out what makes their relationships with the saints special.

"I know God is close to me and loves me, yet God is so other," said Ohio resident and NCR reader Joanne Pasko. "St. Francis I know as a human like I am. I relate to him like an older, wiser brother in heaven."

"You don't always feel like you can have a personal relationship with God," Dohmeier said. "God can feel so distant. The idea that God is so much bigger than us … That can be intimidating."

People are drawn to saints because of "their human frailties" and because "their shortcomings are similar to ours," said Fairbanks, Alaska, resident and theology teacher Kelle Lynch-Baldwin, 53.

"It comes out of this hierarchy where there is God all the way at the top and you start with someone you can relate to, who will listen to you if you show sort of a devotion to them," said Ellsberg, author of three books on saints.

"I think that that's an approach that has been less encouraged now by the church," he said, citing a Vatican II document, Lumen Gentium, which urged the faithful not to worship the saints, but rather look to them as an example.

But the devotions have continued.

Like Dohmeier with her anxiety, many call on saints for everyday worries. Lynch-Baldwin, for example, looks to St. Patrick, the patron saint of Ireland, when she needs strength and to "stand up for what's right."

She has traveled to Ireland eight times and has climbed Croagh Patrick mountain — also known as the Holy Mountain — on a pilgrimage there. The origins of the pilgrimage date back to the Stone Age, when pagans gathered at the site to mark the start of harvest season, according to the website for the Croagh Patrick Visitor Centre. As the legend goes, St. Patrick in the year 441 fasted for 40 days at the peak of the mountain, a custom that has been passed down through the generations, the site reads.

In many cases, respondents recalled stories of how they came to love their favorite saint, many of whom were passed down from relatives or loved ones.

Pasko learned about St. Francis of Assisi from her "very" Italian grandmother, she said, who was a Third Order Franciscan. "In the summer, she would sit in her garden where there was a beautiful statue of St. Francis. She told me about him and how she would talk to him. Her love of St. Francis and her statue of him were passed on to me," Pasko said.

A statue of St. Francis stands in a garden. (NCR photo/Teresa Malcolm)

Lawrence Cunningham, retired John A. O'Brien Professor of Theology at the University of Notre Dame and a longtime saint enthusiast and scholar, said one of many ways in which faith is passed on is through storytelling. This includes stories that illustrate bravery or justice, he added, citing saints like Francis of Assisi. "They show us different ways in which it's possible to be a living Christian. And in that sense they become models or paradigms of Christian virtue."

Lisa Hendey, 53, author of A Book of Saints for Catholic Moms, finds such inspiration in saints' stories. For example, it "gives me hope, reading about St. Thérèse [of Lisieux] and her darker side, that I can strive to be a better person in my life," said Hendey, founder of Catholicmom.com.

"I wanted to be brave and fearless like Dymphna," Dohmeier said. "She took control of her life and didn't belong to anyone but God. If that doesn't pique someone's interest, I don't know what would!"

But what makes someone a saint?

Anyone who is saved is a saint, Cunningham said. Only a "miniscule" number are then canonized and officially recognized by the church with their own feast day, he added.

So where did the stories and traditions originate? Experts are unsure.

Stories developed over long periods, Cunningham said, many of which became elaborated over the years, "and popular devotions began to spring up."

Like St. Christopher, known to many as the patron saint of travelers.

NCR Facebook respondent Rick Barnhart said he has a medal of the saint clipped on the visor of his car.

"We don't know anything about the history," said Cunningham of the tradition. "The popular stuff is very complicated and very complex and it's peculiar to certain forms of Catholicism," he added.

"They were not devotions or teachings that were taught by the church," Ellsberg said. "It came out of people's love for these people, for these saints and beliefs that they could have a relationship with them."

In a Sept. 15 Facebook poll, NCR asked readers, "Does anyone carry a prayer card of St. Christopher when they travel? Has anyone buried a statue of St. Joseph to sell their home? Does anyone pray to St. Anthony when they've lost something?"

"I used to scoff at praying to St. Anthony until I, in a desperate situation, sought his help and received an answer almost immediately," said Facebook respondent Leon Andrews.

"Mr. Carzoli, our Italian realtor, told us to bury our St. Joseph statue, but told us it had to be one we owned (not borrowed) and it had to be buried head down in our front yard," wrote Facebook respondent Susan Myhres Griggs. "That sounded sacrilegious to me, but we listed our home in early December and it sold before Christmas!"

A home seller in Lexington, Mass., buries a statue of St. Joseph head down in her front yard. (AP Photo/Elise Amendola)

"Always pray to St. Anthony," Ro Schmidt Schultz wrote. "That's how I found my aunt's old wedding ring tucked away for 'safety' in a sweater pocket — just before I was packing it up for donation! I'm still waiting for him to help me find a favorite pair of earrings. But I'm patient. I know he'll help me eventually."

"Tony, Tony, turn around. Something's lost and must be found," Barnhart wrote.

Theories can be formulated about other stories, said Cunningham, like that of St. Joseph helping people sell their homes. It could be a recent custom, he said, that relates to St. Joseph's image as a father and to the Holy Family.

Stories and traditions vary across different countries, too, Cunningham said. Italians, for example, have a strong devotion to St. Anthony of Padua. Anthony, whom Pope Pius XII in 1946 declared doctor of the church, began as an Augustinian and later joined the Franciscans, according to Ellsberg's Blessed Among Us. Admired for his preaching talents, Francis himself sent a letter to Anthony authorizing him to teach the friars theology. He later went on a preaching mission throughout Italy where he "had the impact of a spiritual revival," Ellsberg writes.

"This stuff is all over the place because the Catholic church is a very old church," Cunningham said.

No matter the person, the story or the origin, people around the world still seek guidance from the saints on how to live out their faith. And sometimes, they even become friends.

"Surviving trauma as a young teen, and being confirmed with [Dymphna], in my mind, we grew up together," Dohmeier said. "I feel like she could have had the same hopes and dreams as I have now, and we get to experience the glory of God together in those moments."

A version of this story appeared in the Nov 4-17, 2016 print issue under the headline: Everyday people.