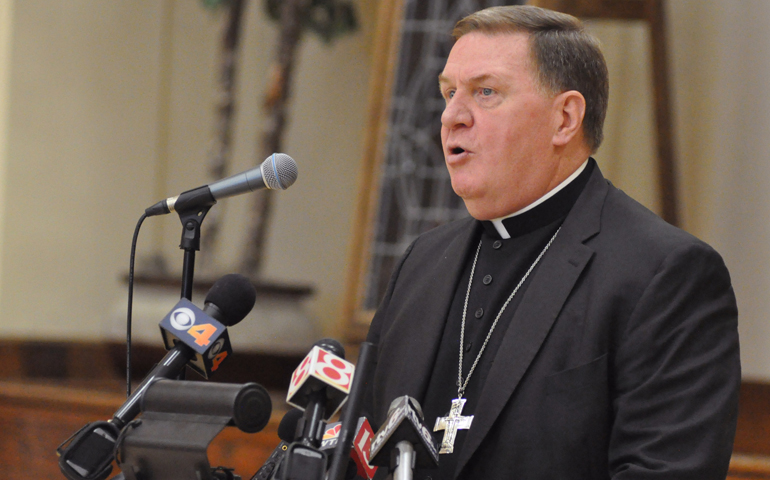 Indianapolis Archbishop Joseph Tobin says he was so out of the loop last Sunday that he only learned from his Twitter feed that he had been appointed a cardinal.

But on at least one issue he and the pope who appointed him appear in perfect sync: showing the world the mercy of God is the essential work of the church.

Mercy is one of Pope Francis' core themes. Tobin views the matter as so important that his wish is that the church would become "a sacrament of mercy" in our world.

Tobin, who on Sunday was announced as one of 17 prelates selected by Francis to join the church's elite College of Cardinals, said that mercy is "an essential revelation of the true nature of God."

Speaking in a phone interview Tuesday, the cardinal-designate said the first step in sharing the pope's consistent message of mercy is to reflect on how we have been recipients of mercy in our own lives.

"Then, to ensure that our church is seen as a sacrament of mercy: that's a never-ending conversion of life for us as a church," he said.

Tobin, who like the other 17 appointees will become a cardinal during a special ceremony at the Vatican Nov. 19, also spoke of mercy in the context of his own personal experience as a recovering alcoholic who has been sober for 29 years.

The cardinal-designate noted that the Gospel reading for Mass this past Sunday, the day Francis announced the new cardinal appointments, was what he called "the Gospel of the recovering alcoholic or the recovering addict."

The reading, taken from Luke's Gospel, tells of a leper Jesus has cured of the disease falling at Jesus' feet to thank him for the healing miracle.

"He comes back because he's made the connection between his release from a terrible, disfiguring and ultimately an alienating disease that takes him away from who he is and those whom he loves," said Tobin. "And he makes the connection that it's this one; this one is the one who released me."

"I don't lead with that, my own experience, in homilies or public discourse, but I don't hide it because I think that would be false," he said. "And it would certainly be ungrateful ... to the one who I believe has redeemed me."

Mentioning his membership in the Redemptorist order -- founded by St. Alphonsus Liguori in the 18th century -- the cardinal-designate pointed to the order's motto, taken from Psalm 130, which begins: "Out of the depths, I cry to you, O Lord."

"The four words we're interested in and St. Alphonsus set for us are Copiosa apud Eum Redemptio, which means: 'With him there is abundant redemption,'" Tobin explained. "I used to say to my brothers any Redemptorist who is recovering knows what copiosa means and we know what the abundance means."

Tobin has spoken about alcoholism publicly in the past and gave a keynote presentation about the issue in 2013 to a Michigan recovery program for recovering priests and clergy called Guest House. The presentation is available online.

Pope Benedict XVI appointed Tobin as the archbishop of Indianapolis in 2012. He had previously been in Rome for 15 years, serving from 1997-2009 as the head of his religious order and from 2010-12 as the secretary for the Vatican's congregation for religious life.

Tobin was staying at St. Meinrad's Archabbey in south Indiana Saturday evening, after attending a conference on women's leadership in the church. In a press conference Monday, he said that the abbey has poor cellphone reception and he became aware of his appointment after seeing people talking about it on Twitter.

"I think the initial reaction was and to some degree remains shock," the cardinal-designate said in the NCR interview. "This was not on the radar screen at all."

Tobin also said he feels "a little bit of embarrassment because I know that there are many fine leaders in episcopal service in the United States and I questioned whether Pope Francis got the best deal."

In the Monday press conference, the cardinal-designate said the Indianapolis archdiocese had been like a teacher to him for the past four years.

Expanding upon that in the interview, Tobin said he is "constantly edified and inspired by the love of the church by a vast spectrum of people here [and] their willingness to move forward, especially in witness to the Gospel."

"Basically it's the sort of welcoming attitude of these Catholic Christians here that help people find a spiritual home," he said, explaining that each year at the Easter Vigil Mass the archdiocese welcomes about 1,100 new Catholics into the faith.

"It's not a job; it's not a career, but it's a witness of the people here," said Tobin, before referencing his own decision in December to go against the wishes of Indiana Gov. Mike Pence, who had asked the archdiocese to not resettle a Syrian refugee family until Congress enacted new immigration legislation.

"I think we can always do a better job but I believe that there is a sort of default welcoming attitude, whether it's to the growing Hispanic population of the archdiocese or, in an incident that achieved some notoriety, the overwhelming support for the Syrian refugees who are resettled here," he said.

Like many diocesan bishops, Tobin writes a weekly column for his archdiocesan newspaper, The Criterion.

Ten of his columns in the past year have focused on different aspects of the pope's message of mercy, with one centering on the recent apostolic exhortation Amoris Laetitia ("The Joy of Love") and its message of inclusion for divorced and remarried people in the church's ministry.

Asked how the exhortation was making a difference in people's lives in Indianapolis, Tobin responded: "I think we as bishops need to do more work in unpacking it."

"Amoris Laetitia isn't easily reducible to tweets, or even answers to a single question: Can they or can't they?" he said, referencing the question of whether divorced people who have remarried without receiving annulments might receive Communion in some circumstances.

"It's a whole, I think, rich and challenging ... process of forming conscience in the light of the Gospel and the tradition of the church," said Tobin. "I think it would really be a mistake to just try to reduce it as a sort-of bite-sized response to a couple of very concrete questions."

Some U.S. bishops have responded to the exhortation in divergent ways. Washington Cardinal Donald Wuerl told NCR recently that it is a document rooted in the church's tradition, while Portland Archbishop Alexander Sample has written a pastoral letter seeking to correct what he called its "troublesome" misuse.

Asked about that dynamic, Tobin said: "I think what bishops need to do is talk with each other, always invoking the Holy Spirit to help us see."

"I think if you're doing that with a sincere heart and the right intention, then I think you can have a sort-of spectrum of opinions without risk of schism or disobedience to the successor of Peter," said the cardinal-designate.

Noting that the U.S. bishops' conference has appointed a working group on implementing Amoris Laetitia, led by Philadelphia Archbishop Charles Chaput, Tobin hopes that during the bishops' annual meeting in November "we're going to be able to have a frank and fraternal and pastoral discussion on the text."

The cardinal-designate is also working on writing a pastoral letter about the exhortation, based partly on his columns, which is still in the drafting phase.

As far as what he thinks Francis needs most from his cardinals, Tobin said the pontiff can benefit from having a good sense of what is happening in local churches around the world.

"When I deal with consultative bodies, which I put a high premium on, I say their first mission is to tell me the truth," he said. "And I think that to the degree that the College of Cardinals is able to do that for the Holy Father ... there's a better chance that we'll be able to convey to him the church's reality in so many different circumstances."