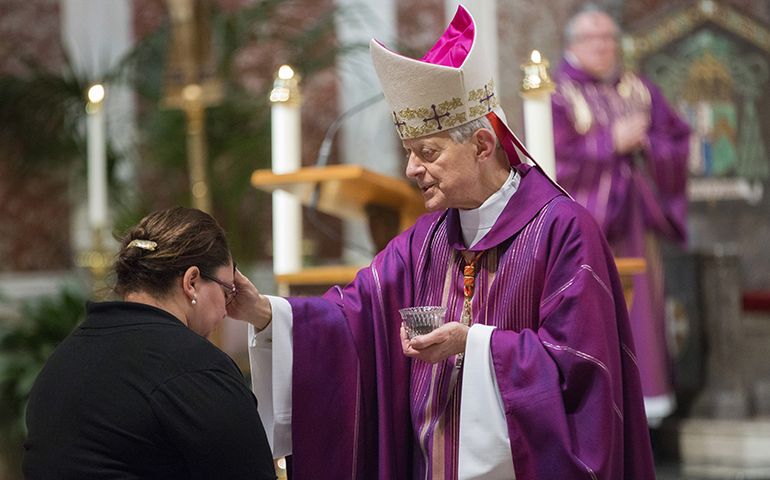 Vatican City — dir="ltr">Washington Cardinal Donald Wuerl has questioned why some choose to vocally criticize Pope Francis' recent apostolic exhortation on family life, saying the document reflects the tradition of the Roman Catholic church and the consensus opinion of its highest-ranking prelates.

Speaking in an NCR interview Thursday, the cardinal said Francis' Amoris Laetitia ("The Joy of Love") was the result of a two-year process of consultation and fits appropriately amid the teaching of the church since the 1962-65 Second Vatican Council.

"If someone has a concern about something they should say specifically what that concern is," said Wuerl. "However, the starting point for me is we just went through a two-year process and it arrived at a document that is clearly a consensus document and clearly rooted in the tradition of the church."

"I find it not all together clear why someone would put their judgment up against the judgment that comes out of all of this magisterial endeavor," said the cardinal. "This was a work of consensus and this was a work that's deeply rooted in the magisterial tradition of the church."

Referencing 13th-century theologian St. Thomas Aquinas, Wuerl added: "What it's calling for is something that's a great part -- and those of us that are Thomists recognize St. Thomas in this -- a calling for clarity in teaching but pastoral accompaniment with people who are trying to appropriate the teaching."

The cardinal was speaking about Francis' document in response to a question about the criticism it has faced, which in recent months has sometimes taken strident tones. One July critique of the exhortation, signed by theologians and one church prelate, even said it contains "dangers to Catholic faith and morals."

Amoris Laetitia was released by Francis in April as a response to the discussions of the two meetings of the Synod of Bishops he held at the Vatican in 2014 and 2015 on issues of family life.

The document asked the world's Catholic clergy to let their lives become "wonderfully complicated" by embracing God's grace at work in the difficult and sometimes unconventional situations families face.

In Thursday's half-hour interview, Wuerl also spoke about what Francis is looking for in choosing new bishops around the world and about the pope's recent creation of two new Vatican offices streamlining the church's work in several areas.

On the 2014 and 2015 synod process, the cardinal said that Francis is "picking up where the threads of the Council were leading."

Tracing the history of the church since the Council, Wuerl said "there was a lot of confusion" following the three-year meeting of the world's bishops.

"There was a lot of overreaching, theologically and also liturgically," he said. "And it took the pontificate of John Paul II to get everything back more or less on track. And now we're having Francis saying, 'OK, let's get back now to the inspiration of the Council.'"

The cardinal said the pope is saying: "Let's focus on the role of the laity in the church, let's focus on how it's the layperson, well formed in the faith, who's supposed to be the one who transforms the secular order."

Wuerl explained that Pope Paul VI created the process of holding synods in the church at the end of Vatican II to allow the world's bishops to come to Rome occasionally and "keep alive the collegial experience" they had at the Council.

He said that John Paul II used synods to reflect on each of the different Vatican II documents.

"Now Francis is saying, 'Look, we've just had 30 years of synods focusing on the teaching,'" said Wuerl. "'We know we're in a good place. Let's now focus on the transformative element.'"

"I think that's why he keeps challenging us to bear witness to the Gospel, not just with the words but with our actions," said Wuerl, pointing to the positive reaction that Francis receives for "how he lives the Gospel with such simplicity."

The cardinal said he sees a clear constancy in teaching between Francis and his predecessors.

"The emphasis is on living witness rather than on verbal witness," said Wuerl. "But I just see an enormous continuity between the Council and what Paul VI was attempting to get started and what John Paul II made possible by all the work he did in stabilizing the church in all his teachings to implement the Council."

"Now Francis comes along and says, 'Let's keep doing this,'" he said.

Wuerl also said Francis is giving special importance to the role of the synod in the life of the church.

Baldisseri, Wuerl noted, was given precedence in the College of Cardinals over Müller "as if to say, the Synod of Bishops is a much more significant entity in the church."

"It takes precedence over the curia," said the cardinal, paraphrasing from the Vatican II document Lumen Gentium: "The bishops together with and never without Peter are responsible for the church."

"[The] curia exists to carry out the decisions and policies that are arrived at by the bishops, always with and never without Peter," said Wuerl.

In regards to bishop appointments, the cardinal said that while he knows that the Council of Cardinals has said they are considering changes to the process by which bishop candidates are proposed to the pope that he was not aware of specific proposals.

Wuerl, a member of the Congregation for Bishops, referenced a talk Francis gave to that dicastery in 2014.

"He was saying then that he wasn't finding fault with the structure, he was asking that it be attentive to the pastoral needs of the church," he said.

Wuerl said Francis told the congregation then that he wanted them to be proposing good pastors as bishops, suggesting they use "the Jesse principle" in reference to the Old Testament story of the prophet Samuel asking Jesse if he had shown him all of his sons to be evaluated as a possible successor to Saul.

Jesse mentions that he had another son, David, working outside.

"That was the pope's way of saying: 'Don't be too restrictive and don't be too comfortable,'" said Wuerl.

The cardinal said that Francis is also emphasizing that the church should be "balancing all the elements" in its choice of leaders.

Speaking about the two new Vatican dicasteries, the cardinal said Francis is looking for a way to streamline and "better focus" the functioning of the offices of the Roman Curia.

Wuerl said that after the end of Vatican II there had been a multiplication of pontifical councils working on different issues.

"They just began to grow," he said. "And I think long before Pope Francis became pope there was the realization that there should be better collaboration among them."

The cardinal also said that the merging of several pontifical councils into two new larger entities may mean that there may be fewer offices in Rome in the future that need to be led by cardinals.

"The other aspect of that here in Rome is that if everyone of those is headed by a cardinal, you have a large concentration of cardinals in Rome at the very time that the church was trying -- this goes all the way back to Paul VI -- to name more cardinals, not only outside of Rome and Italy, but outside of Europe," said Wuerl.

The cardinal noted that for now the new offices are being called dicasteries, not pontifical councils or congregations.

"I suspect we're going to see that both of these will rise to the level of congregations, if not in name in power, in authority, in exercise of jurisdiction," he said.

Wuerl also praised Francis' ongoing reforms of the Vatican, saying: "I get the impression looking at all of this that this is moving along quite well."