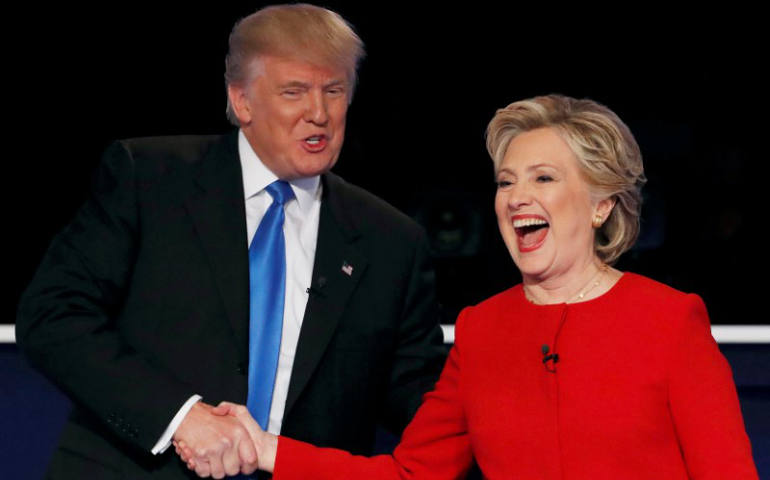 This has been an unconventional election by almost any measure, with both candidates garnering record high negatives from the voters and political newcomer Donald Trump -- a real estate and casino mogul -- lowering the bar on almost every previous standard of acceptable campaign rhetoric.

But the Catholic church likes nothing better than to stick with tradition, and so Trump, the Republican nominee, and his Democratic opponent, Hillary Clinton, will be headlining the glitzy Al Smith Dinner at the Waldorf-Astoria Hotel in Manhattan next month to trade jokes (hopefully) rather than barbs in a custom that goes back more than 70 years.

“The presidential nominees will share the dais with Cardinal Timothy Dolan, archbishop of New York, and they will deliver the evening’s speeches in the spirit of collegiality and good-humor that has become a hallmark of the gala,” said a statement issued Tuesday by the New York archdiocese and the foundation that runs the event.

The Oct. 20 dinner "honors a cause that transcends the polarizing political rhetoric of the day and exemplifies the vision of Gov. Alfred E. Smith, known as 'The Happy Warrior' for his ability to maintain his positive outlook even as he tackled the pressing social issues of his day," the statement said.

The dinner's namesake was the New York governor who in 1928 became the first Catholic nominee for president. Smith was known as a reformer and “man for the people,” but anti-Catholicism was still so virulent at the time and the pre-Depression economy of the 1920s roaring so fiercely that the Democrat was trounced by Republican Herbert Hoover.

A charitable foundation that takes his name was launched in 1946, two years after Smith’s death, and over the years its annual dinner has become “a ritual of American politics,” as historian Theodore H. White put it, where candidates of opposing parties would come together for a few hours of comic relief at the height of an intense campaign battle.

But the white-tie dinner itself has not been free of controversy, especially for its host. Dolan, for example, was excoriated by conservative Catholics in 2012 when he continued the tradition by inviting President Barack Obama, whose stance in support of abortion rights and other issues outraged some.

There was some precedent for Dolan to punt on an invitation to Obama: In 1996, then-Cardinal John O’Connor did not invite either of that year's candidates because he did not want to give President Bill Clinton, an abortion rights supporter who was running for re-election, a church-sponsored platform that tends to show the candidates in a flattering light.

And in 2004, then-Cardinal Edward Egan did not invite either candidate, President George W. Bush or his challenger Democratic nominee, John Kerry, a Catholic who supports abortion rights.

But Dolan is an outgoing personality who tends to prefer engagement to picking fights, and he also enjoys an evening that can showcase his own deft talent for quips.

Four years ago, Dolan defended himself from the critics, saying the dinner is a time for civility, engagement and dialogue -- and raises money for needy children.

“Those who started the dinner 67 years ago believed that you can accomplish a lot more by inviting folks of different political loyalties to an uplifting evening, rather than in closing the door to them,” Dolan wrote at the time.

He added that he believed he was also following the example of Jesus, “who was blistered by his critics for dining with those some considered sinners; and by the recognition that, if I only sat down with people who agreed with me, and I with them, or with those who were saints, I’d be taking all my meals alone.”

Whether Dolan will be criticized again this year, or in the same way, remains to be seen. The real interest may be on how the candidates comport themselves.

Trump has upended conventional Republican politics, especially its family values agenda: He is a thrice-married businessman with a legacy as a playboy and someone who has supported abortion rights and gay rights. He has made headlines by insulting ethnic and religious minorities, women and the handicapped, among others.

While Trump has said he will oppose abortion as president, many remain dubious, and some of his other statements have upset Catholic leaders.

Trump has also shown himself to be relatively thin-skinned when it comes to criticism or teasing, which is unusual for a candidate for such a high office, where calumny and comedy are daily fare.

And if Clinton is not quite the tummler that other candidates have been, she has shown an ability to tweak Trump, as she did in the first of three presidential debates on Monday night.