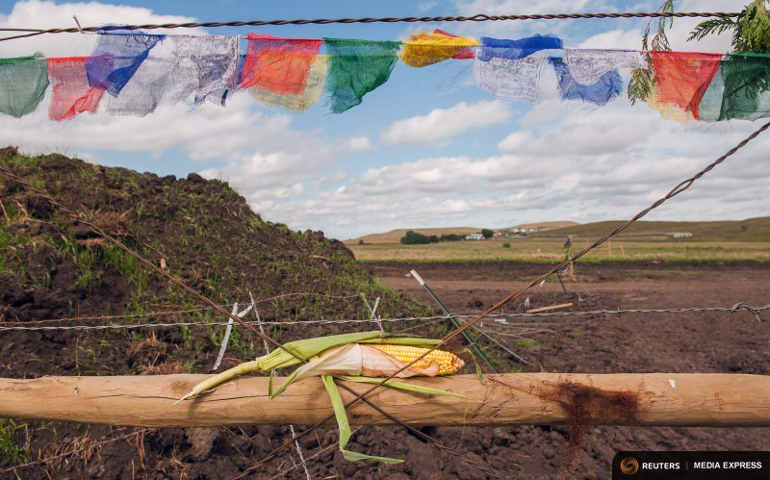 The U.S. government moved on Friday to halt a controversial oil pipeline project in North Dakota that has angered Native Americans, blocking construction on federal land and asking the company behind the project to suspend work nearby.

The move came shortly after U.S. District Judge James Boasberg in Washington rejected a request from Native Americans for a court order to block the project. The government's action reflected the success of growing protests over the planned pipeline that have drawn international support and sparked a renewal of Native American activism.

"This case has highlighted the need for a serious discussion on whether there should be nationwide reform with respect to considering tribes' views on these types of infrastructure projects," the U.S. Departments of Justice, Army and Interior said in a joint statement released minutes after Boasberg made his ruling.

Opposition to the pipeline has drawn support from 200 Native American tribes, along with celebrities and activists from across the globe.

The Standing Rock Sioux, whose tribal lands are a half-mile south of the proposed route, say the pipeline would desecrate sacred burial and prayer sites, and could leak oil into the Missouri and Cannon Ball rivers, on which the tribe relies for water.

The $3.7 billion, 1,100-mile Dakota Access pipeline would be the first to allow movement of crude oil from the Bakken shale, a vast oil formation in North Dakota, Montana and parts of Canada.

It would carry oil from just north of land owned by the Standing Rock Sioux tribe to Illinois, where it would connect with an existing pipeline and route crude directly to refineries in the U.S. Gulf Coast.

In his ruling Boasberg said he could not concur with claims by the Standing Rock Sioux tribe that the government erred in approving the Dakota Access pipeline.