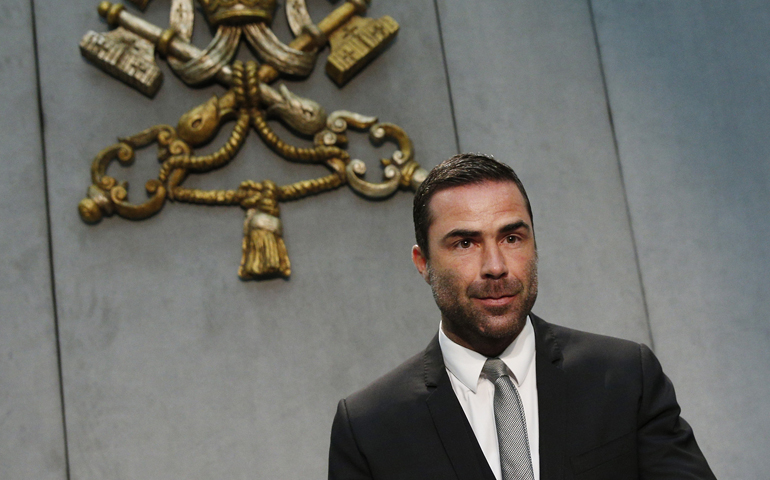 René Brülhart, president of the Financial Intelligence Authority, arrives for a briefing on the 2015 annual report of the Vatican's financial watchdog agency at the Vatican April 28, 2016.

The Vatican’s financial watchdog registered a three-fold decrease in suspicious transactions undertaken in the city-state’s financial institutions in 2016, stating in a yearly report the downtick indicates more effective implementation of Pope Francis’ reforms.

The AIF says in the report, released Tuesday, that the decrease indicates “an ever-increasing and effective implementation of reporting requirements.”

The agency also reveals it made 22 reports to the Vatican’s Office of the Promoter of Justice, the city-state’s prosecutorial division, for possible review of crimes including fraud and “serious tax evasion, misappropriation and corruption.”

The watchdog agency gave the statistics in its fifth annual report. The agency, which was started by Pope Benedict XVI in 2010 but continued and strengthened under Francis, has been working to bring the Vatican’s diverse set of financial organizations into compliance with international standards.

The AIF report did not explain if or how the Promoter of Justice is following up on the agency’s requests for reviews of possible crimes. While the watchdog agency has made 56 such requests since 2012, the promoter, Gian Piero Milano, has only announced two prosecutions in that time. In a February report, Milano said two cases went to trial for the first time in 2016.

René Brülhart, the agency’s president, said at a press conference Tuesday that he could not speak on Milano’s behalf but that there had been “relevant developments” regarding possible prosecutions “in the last period of time.”

“I think it’s important to note here from where we are coming,” said Brülhart. “The system which has been built and established … is still relatively young.”

The agency president also said that some of the cases his agency referred to the promoter have international connections, meaning that gathering evidence about them from foreign authorities can take more time.

“There is a certain process that has to be respected,” he said. “I’m sure that also from the side of the Promoter of Justice that relevant messages are going to be brought forward in the not too far future.”

Brülhart also said the downtick in activities marked as suspicious in 2016 was not a surprise to his agency.

“For us here it was never about quantity,” said the agency president. “It was always about quality.”

“This decrease we have faced in 2016 is not a surprise at all,” he said. “I think it’s a logical follow-up on the path we were on in the last years.”

“I would call it an ordinary consolidation of the reporting system as such,” Brülhart added.

The AIF report also reported a large uptick in the Vatican’s communication with international communication exchanges, stating that there had been a 220 percent increase in such activity, with the Vatican agency making 721 requests for information in 2016.

The report said the uptick was due to the “preventive and proactive approach” taken by the agency and “the sophisticated feature of cases under strategic and operational analysis.”

The Financial Information Authority is one of the Vatican’s several financial agencies.

Francis created the Secretariat for the Economy in 2014 to place the agencies under one centralized office, putting Pell in charge of the new operation. The Secretariat is overseen by the Council for the Economy, a group of eight cardinals or bishops and seven lay people.

In its 2015 report, the financial watchdog said it had completed a review of all of the accounts held at the so-called Vatican bank, known formally as the Institute for the Works of Religion, and that 4,800 accounts at the institution were closed.

A version of this story appeared in the June 2-15, 2017 print issue under the headline: Vatican financial report: Suspicious activity down.