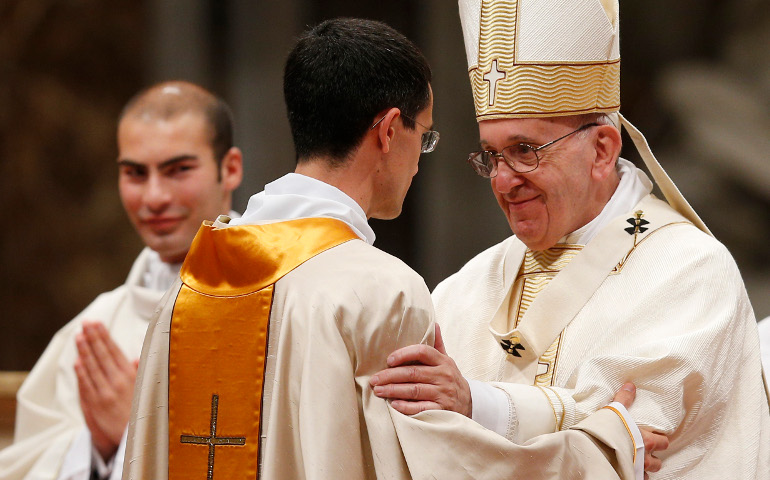 Pope Francis greets a new priest during the ordination Mass of 11 priests in St. Peter's Basilica at the Vatican April 17. (CNS / Paul Haring)

The Catholic church needs holy, healthy and humble priests and that requires prayers for vocations and the careful selection and training of candidates, said the Congregation for Clergy.

Updating 1985 guidelines for preparing men for the Latin-rite priesthood and ensuring their continuing education, training and support, the Congregation for Clergy Dec. 7 released "The Gift of the Priestly Vocation," a detailed set of guidelines and norms for priestly formation.

The updated document draws heavily on St. John Paul II's 1992 apostolic exhortation on priestly formation, as well as on the teaching of and norms issued by now-retired Pope Benedict XVI and Pope Francis and by Vatican offices over the past three decades.

It reaffirms an instruction approved by Benedict in 2005, which said, "the church, while profoundly respecting the persons in question, cannot admit to the seminary or to holy orders those who practice homosexuality, present deep-seated homosexual tendencies or support the so-called 'gay culture.'"

The document insists that through courses in pastoral theology, the example of priests and practical experience, candidates for the priesthood learn that priestly ministry involves — as Pope Francis says — being "shepherds 'with the smell of the sheep,' who live in their midst to bring the mercy of God to them."

Highlighting lessons learned over the past 30 years from the clerical sexual abuse scandal, the new guidelines state, "The greatest attention must be given to the theme of the protection of minors and vulnerable adults, being vigilant lest those who seek admission to a seminary or to a house of formation, or who are already petitioning to receive holy orders have not been involved in any way with any crime or problematic behavior in this area."

Seminars and courses on the protection of children and vulnerable adults must be part of both seminary education and the continuing education of priests, it says. And bishops must be very cautious about accepting candidates for the priesthood who have been dismissed from other seminaries.

In the end, each bishop is responsible for determining which candidate for priesthood he will ordain, but the guidelines strongly encourage bishops to accept the judgment of seminary rectors and staff who determine a certain candidate is unsuitable.

"Experience has shown that when ordinaries (bishops) have not accepted the negative judgment of the community of formators, it has been the cause of great suffering in many cases, both for the candidates themselves and for the local churches," the document says.

Reaffirming the requirement that seminarians study Catholic social teaching, the document says the education must include a study of climate change and other environmental threats.

"Protecting the environment and caring for our common home — the Earth — belong fully to the Christian outlook on man and reality," the document says. Catholic priests must be "promoters of an appropriate care for everything connected to the protection of creation."

Seminarians should be encouraged to use social media to build relationships and for evangelization, the guidelines say, but seminary personnel will need to help the students use the media wisely and in a way that is healthy.

Psychologists, whether or not on the staff of the seminary, can provide valuable help to the seminary rector and diocesan bishop "in the assessment of personality, expressing an opinion as to the psychological health of the candidate and in therapeutic accompaniment, in order to shed light on any problems that may emerge and to assist in growth in human maturity," the document says.

The Congregation for Clergy recommends that women be on the staff of seminaries or teach at the universities where the candidates study and that seminarians' ability to relate to and work with women be considered in the candidate's evaluation, since the majority of parishioners with whom the future priest will work are women.

The guidelines, which are to be adapted by national bishops' conferences, include an outline of the stages, prayer life and specific subjects to be studied during the six or more years of preparation for priestly ordination.

But the guidelines also acknowledge that many of the skills needed to be a good priest cannot be learned in a classroom. They are the result of prayer, self-discipline and seeking to model one's behavior on that of Christ, the document says.

"The call to be pastors of the people of God requires a formation that makes future priests experts in the art of pastoral discernment, that is to say, able to listen deeply to real situations and capable of good judgment in making choices and decisions," it says. "To make pastoral discernment effective, the evangelical style of listening must take central place. This frees the pastor from the temptation of abstraction, to self-promotion, to excessive self-assurances and to that aloofness that would make him a 'spiritual accountant' instead of a good Samaritan."