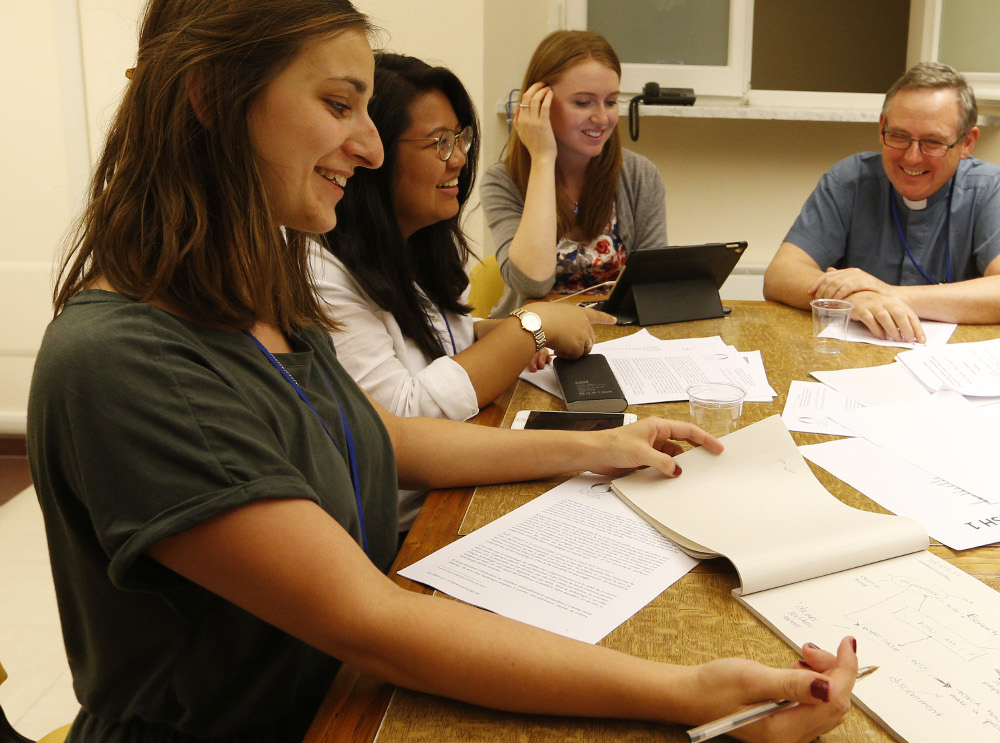 Silvia Bohl, left, participates in a small group discussion during a Vatican-sponsored seminar about the concerns of young people at the Jesuit headquarters in Rome Sept. 13. The seminar was part of the preparatory process for the 2018 Synod of Bishops on "young people, faith and vocational discernment." (CNS/Paul Haring)

Several young people attending a Vatican-sponsored seminar on the upcoming Synod of Bishops urged the Vatican and the bishops themselves to be open to listening to youths talk and ask questions about love, sex and sexuality.

A "big gap" exists between the concerns young people want to talk about and the issues most bishops are comfortable discussing, said Therese Hargot, who describes herself as a philosopher and sexologist.

Cardinal Lorenzo Baldisseri, secretary-general of the Synod of Bishops, said he wanted to hear from young adults and experts about the challenges young people are facing in the church and society.

Twenty people under the age of 35, along with 70 theologians, priests and academics were meeting Sept. 11-15 as part of the preparatory process for the 2018 Synod of Bishops on "young people, faith and vocational discernment."

The cardinal's office planned a dozen long, formal talks on subjects including "the search for identity," political commitment, planning for the future, technology and transcendence.

But Hargot, who leads sex education programs at Catholic schools in Paris, told the gathering Sept. 13, "it's surprising we are looking at politics, economics, etc., but not at sexuality and affectivity, which are very important topics for young people."

"Young people want to talk about sexuality and love," she told Catholic News Service. "They love learning about the theology of the body," a term referring to St. John Paul II's approach to sex and sexuality. "I don't know why no one here is speaking about love. It's amazing."

Ashleigh Green, an Australian delegate to the seminar, said that going around Australia in preparation for the synod she found that "a lot of young people feel like they cannot talk about issues that matter to them" in most church settings.

"It's important to open up and talk" about sex, sexuality and sexual orientation, she said. "And it's central to vocation," which is part of the synod's focus.

Severine Deneulin, an associate professor in international development at England's University of Bath, said she was finding "it hard to figure out" what the Vatican wanted from the seminar. "Is it to listen to young people? Does that mean they are willing to change something? Are they willing to change the criteria for ministry?"

"That's why I have a secular career," she said. In academia "I am accepted for who I am and for my talents. In the church, I would not be. If we are worried about leadership in the church, why do we ignore half the church," meaning the women. "Why aren't we talking about this?"

Natalia Shalata, a young woman from Ukraine who runs a program to support orphans and street children, brought a different concern to the seminar Sept. 13.

During the discussion about young people and politics, she told the gathering, "For my generation it is extremely important" to learn how to be effective and to be heard. "When political leaders don't live up to their expectations, they (the young) are willing to take extreme action," including suicide. It is a growing problem in Ukraine, which still is fighting a war in its eastern territories.

Shalata, a Ukrainian Catholic married to a priest, said the church must "go out and hear these strong cries" for help.

Baldisseri opened the seminar Sept. 11 explaining that the gathering was one attempt to "frame or photograph the situation of young people, identifying the basic traits that are common for youths today while also paying attention to the plurality" determined by geographical and cultural differences.

Pope Francis, he recalled, wants the synod in October 2018 to not just be about young people, but with young people, assuring they have a voice.

As part of that, his office has posted a questionnaire at youth.synod2018.va and is inviting young people 16-29 to respond. "In the roughly three months it has been online, more than 110,000 young people have responded to the questionnaire," he said. "It's a significant number considering the absolute novelty of the initiative, and one that is bound to increase in the coming months."

The response rate, he said, "demonstrates the great desire of young people to have their say."