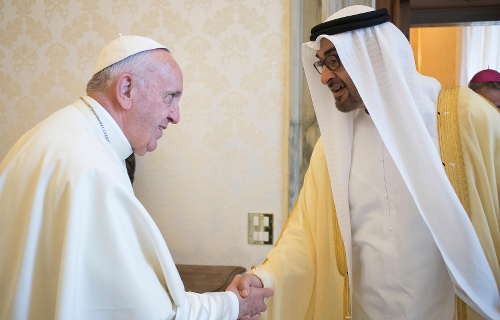 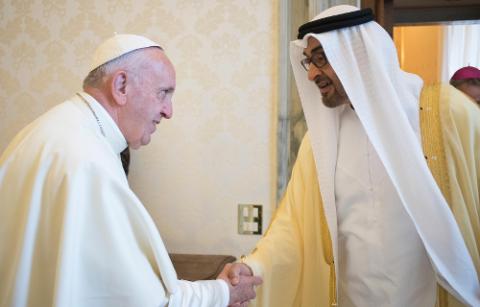 Pope Francis will be the first Catholic pontiff to visit the United Arab Emirates, traveling to Abu Dhabi in February for an interfaith meeting.

The Vatican announced the trip Dec. 6, in a surprise statement that said the pope had been invited to make the journey by Abu Dhabi's crown prince, Mohammed bin Zayed Al Nahyan.

Francis will visit from Feb. 3-5. Vatican spokesman Greg Burke said the theme of the trip will be "Make me a channel of your peace," a line from the prayer that is often attributed to the pontiff's namesake, 13th-century St. Francis of Assisi.

The trip will be the pontiff’s seventh visit to a Muslim-majority country. His most recent was to Bangladesh in 2017. He had also visited Egypt earlier that year.

The Vatican said the meeting Francis will attend in Abu Dhabi is centered on "human fraternity," but did not provide further details.

The crown prince tweeted shortly after the announcement that his country was "delighted" to welcome the pontiff, and called him "a symbol of peace, tolerance and the promotion of brotherhood."

"We look forward to a historic visit, through which we will seek dialogue on the peaceful coexistence among peoples," said bin Zayed Al Nahyan.

Burke said a "major topic" of the visit will be "how all people of goodwill can work for peace."

"This visit, like the one to Egypt, shows the fundamental importance the Holy Father gives to inter-religious dialogue," said the spokesman. "Pope Francis visiting the Arab world is a perfect example of the culture of encounter."

Besides Bangladesh, Egypt and Turkey, Francis visited the Muslim-majority countries of Azerbaijan in 2016, Albania in 2014, and Jordan and Palestine as part of his visit to the Holy Land in 2014.

The timing of the visit to Abu Dhabi is a bit unusual, as the pope is already visiting Panama for World Youth Day from Jan. 23-27. After landing back in Rome Jan. 28, the pontiff will have just four days before heading out again.

Not counting his upcoming trips, Francis has visited 38 countries outside Italy since being elected pope in March 2013.

According to the latest Vatican statistics, there are about 900,000 Catholics among the United Arab Emirates' population of some 9.4 million people. The Catholic community in the country is part of the Apostolic Vicariate of Southern Arabia, which is led by Swiss Bishop Paul Hinder.